Thirteen is played by Olivia Wilde in House M.D..

Dr. Eric Foreman: So you're okay with House getting Chase smashed enough to make a stupid mistake?
Thirteen: Being drunk doesn't change who you are, it just reveals it.

Thirteen - Dr. Hadley: Maybe he's looking for someone to mother him after what happened.
Dr. Eric Foreman: Only kind of mothering House wants involves a bullwhip, leather diapers, and a credit card.

Dr. Eric Foreman: Think she can do the broken cowboy?
Thirteen: God, I hope so.

Dr. Eric Foreman: Think she can do the broken cowboy?
Thirteen: God, I hope so.

Thirteen - Dr. Hadley: I told you Thailand!
Dr. Gregory House: I assumed you were lying. Because it would have been idiotic of you to tell me the truth. Yet another reason I have no use for you.

Dr. Remy 'Thirteen' Hadley: Is that your passive-aggressive way of asking me if I'm seeing somebody else?
Dr. Eric Foreman: I hope you are. I mean... I hope you have someone with you. If I'm scared about this, I can't imagine how you must feel. You shouldn't be alone. If you want... I could fly over for a few days. Friends.
Dr. Remy 'Thirteen' Hadley: I appreciate that, but I think I'll be okay. I guess we took the long way around to being friends, huh?

Dr. Gregory House: Your High School boyfriend who dumped you. Leaving you unable to believe that anyone can rekindle and old flame.
Dr. Remy 'Thirteen' Hadley: He dumped me after I hooked up with his sister.
Dr. Gregory House: ...Would you mind letting him down gently? I might've made promises that you can't keep.

Dr. Robert Chase: Just because he has guns doesn't mean he's a murderer.
Dr. Remy 'Thirteen' Hadley: Tell that to the bear.

Dr. Robert Chase: Have you talked to anyone about it?
Dr. Remy 'Thirteen' Hadley: No, I may have an Aortic Arch Aneurism. Oh wait, that's her. Either help me or leave! 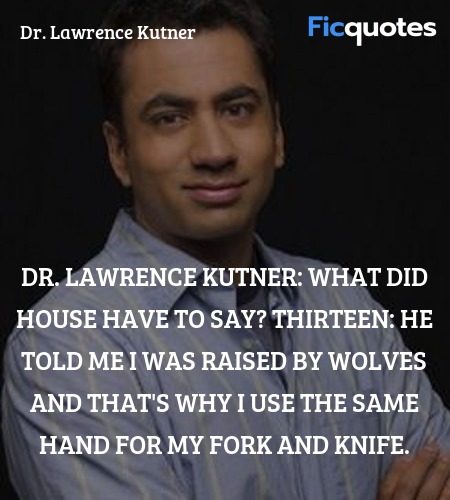 Dr. Lawrence Kutner: What did House have to say?
Thirteen: He told me I was raised by wolves and that's why I use the same hand for my fork and knife.

Dr. Gregory House: Motives for murder.
Thirteen: House, it was a suicide. The police have already investigated.
Dr. Gregory House: They investigated what they saw, not what they didn't saw. Talk to friends, classmates, pizza delivery guy. And draft Foreman. He can make calls through his tears.
Thirteen: No.
Dr. Gregory House: Is that "No, I'm not calling my boyfriend, who apparently called my boss instead of me to say he wasn't coming in?" cause it's really not fair to have that much subtext in one syllable.
Thirteen: We all want to know why Kutner did it, but we're not gonna waste time chasing ghosts.

Dr. Lisa Cuddy: I was paged?
Nick: Whoa! I would do her in a minute with fudge and cherry on top. Would someone please explain to this woman, there's only so many apologies I can...
Dr. Remy 'Thirteen' Hadley: He has Frontal Lobe Disinhibition.

Dr. Remy 'Thirteen' Hadley: Pain could be caused by a blind uterus hidden in his abdomen. He needs an MRI.
Dr. Eric Foreman: Right, boy with girl genes. I'm sure you're the first doctor brilliant enough to check for a uterus.

Dr. Gregory House: He asked for my advice before he switched you off the placebo. I told him to do it if he loved you.
Dr. Remy 'Thirteen' Hadley: He only thinks he loves me.
Dr. Gregory House: It's the same thing! Yes, he's an idiot. You didn't ask him to do anything, you're pissed off that he did. So let him torch his career to pay for his sins. Unless you actually feel something for the idiot. In which case, you might want to tell him to turn around. 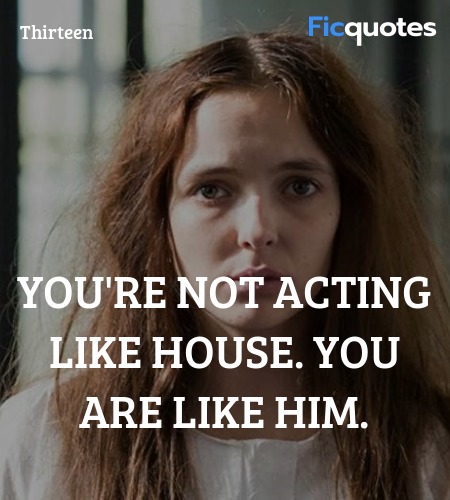 Dr. Eric Foreman: Must've been horrible watching her die.
Thirteen: I wanted her to die. She just... yelled so much, and for no reason. Just screamed at me in front of my friends. My father tried to explain to me that her brain was literally shrinking, that she didn't mean it. That it was the disease. But I didn't care. I hated her. I never said good-bye. And she died with me hating her.

Dr. Chris Taub: If you're this grown up at 16, what happens at 30?
Thirteen: You turn back into a kid... like Kutner.
Dr. Chris Taub: Kutner's not that bad.
Thirteen: He needs everything to be nice. Wants to see the best in everyone.

Thirteen: What did Cuddy want?
Dr. Gregory House: I kinda hit that last night, so now she's all on my jock.
Thirteen: Wow! She looks pretty good for someone on roofies.

Dr. Eric Foreman: You're doing drugs, staying up all night, having sex with strangers.
Dr. Remy 'Thirteen' Hadley: It sounds like fun to me.

Thirteen: Bubbles.
Dr. Gregory House: Is that your new stripper name?
Thirteen: Yes. And also we inject bubbles into the cyst and follow where they drift. They end up in the other organs, we know you're right, cut it out, she's fine.
Dr. Gregory House: Bubbles is right.

Thirteen: Drugs? How many trials are you on?
Brandon: Three.
Dr. Gregory House: Admirable. Not many idiots have that much ambition.

You know, people hate people who have theories about people.

Dr. Gregory House: Brain's clean. Moving on.
Dr. Remy Hadley: To where? We've gone from making no sense to making less sense and then taking a step backward.

We hope you enjoyed reading our collection of Thirteen quotes. You can also browse other House M.D. quotes . If you think we missed any quote from Thirteen or House M.D., please send it to us.