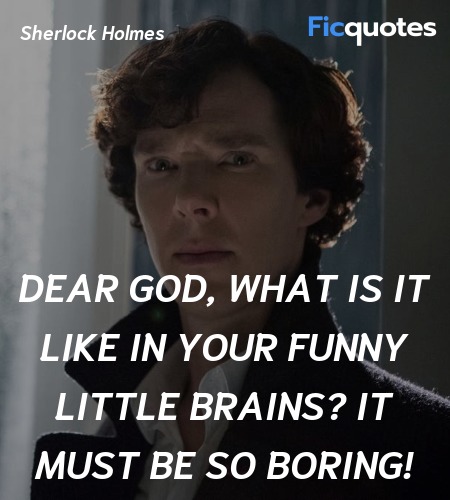 Dear God, what is it like in your funny little brains? It must be so boring! 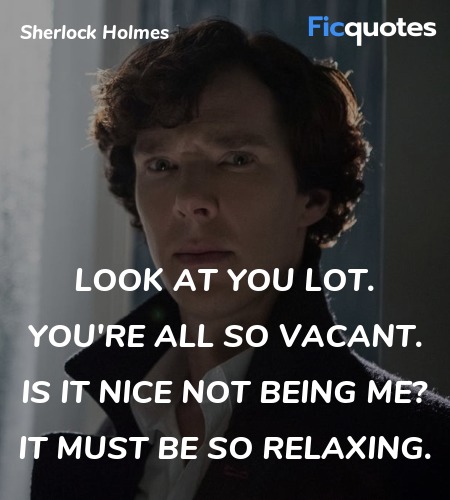 Look at you lot. You're all so vacant. Is it nice not being me? It must be so relaxing. 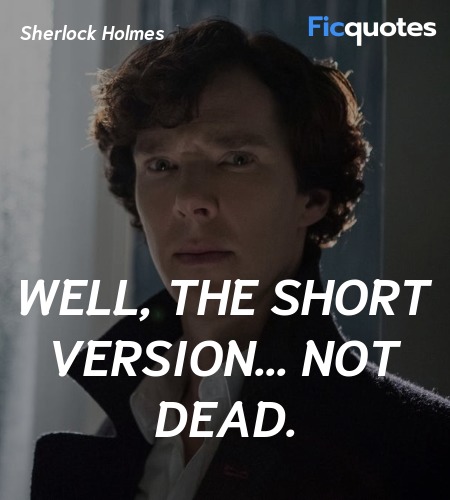 Well, the short version... not dead.

Mrs. Hudson: Would you like a cup of tea?
Mycroft Holmes: Thank you.
Mrs. Hudson: The kettle's over there.

Oh, do your research. I'm not a hero, I'm a high-functioning sociopath. Merry Christmas! 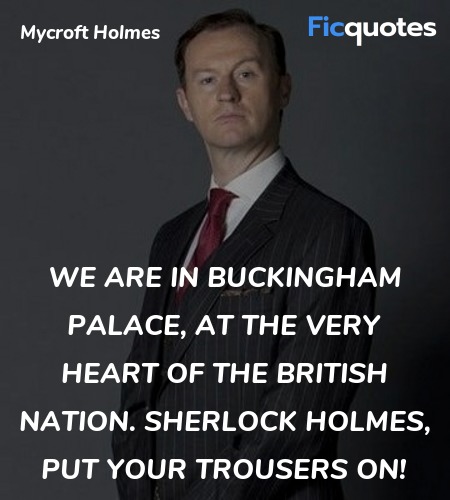 We are in Buckingham Palace, at the very heart of the British nation. Sherlock Holmes, put your trousers on!

I'm an army doctor, which means I could break every bone in your body while naming them.

I'm the widow of a drug dealer, I own property in central London, and, for the last bloody time, John, I'm not your housekeeper.

Get out of my house. You reptile.

Mycroft Holmes: What you're about to see is classified beyond top secret. Is that quite clear? Don't minute any of this. Once beyond these walls, you must never speak of it. A D-notice has been slapped on the entire incident. Only those within this room, code-names Antarctica, Langdale, Porlock and Love, will ever know the whole truth. As far as everyone else is concerned, going to the Prime Minister and way beyond, Charles Augustus...
Mycroft Holmes: Are you tweeting?

Dr. John Watson: Um... Mmm, right, you... You told me once... that you weren't a hero. Umm, there were times I didn't even think you were human but let me tell you this, you were, uh, the best man and the most human... human being that I've ever known and no one will ever convince me that you told me a lie. That so... there.
Dr. John Watson: I was... I was so alone. And I owe you so much.
Dr. John Watson: Oh, please, there's just one more thing, right? One more thing. One more miracle, Sherlock, for me. Don't... be... dead. Would you, just for me, just stop it? Stop this.

Sherlock Holmes: Imagine someone's going to get murdered at a wedding. Who exactly would you pick?
Mrs. Hudson: I think you're a popular choice at the moment, dear.

Did you miss me?

A nice murder. That will cheer you up.

Mrs. Hudson: Your mother has a lot to answer for.
Sherlock Holmes: Hmm, I know. I have a list. Mycroft has a file.

John, you are addicted to a certain lifestyle. You're abnormally attracted to dangerous situations and people, so is it truly such a surprise that the woman you fall in love with conforms to that pattern.

There must be something comforting about the number three. People always give up after three.

Mrs. Hudson: I'll make you that cuppa, you rest your leg.
Dr John Watson: Damn my leg! Sorry, I'm so sorry. It's just sometimes this bloody thing...
Mrs. Hudson: I understand, dear, I've got a hip.

Did we just break into a military base to investigate a rabbit?

Try not to start a war before I get home. You know what it does to the traffic.

So if you have what you say you have, I will make you rich. If you don't, I'll make you into shoes.

I mean, obviously, "normal" and "fine" are both relative terms when it comes to Sherlock and Mycroft.

So, who loves you? I'm assuming it's not a long list

Twenty-year-old disappearance? A monstrous hound? I wouldn't miss this for the world!

Mary, when I say you deserve this man, it is the highest compliment of which I am capable.

People leave their bodies to science. I think cannibals would be so much more grateful.

Taking your own life. Interesting expression. Taking it from who? Once it's over, it's not you who'll miss it. Your own death is something that happens to everybody else. Your life is not your own. Keep your hands off it.

When does the path we walk on lock around our feet? When does the road become a river with only one destination? Death waits for us all in Samarra. But can Samarra be avoided?

DI Lestrade: There's still reporters outside.
Mrs. Hudson: They've been there all the time. I can't get rid of them. I've been rushed off my feet making tea.
DI Lestrade: Why do you make them tea?
Mrs. Hudson: I don't know. I just sort of do.

Mrs. Hudson: A case? Oh, you're not up to it, are you?
Sherlock Holmes: Work is the best antidote to sorrow, Mrs Hudson.

Holmes, against absolutely no opposition whatsoever, I am your closest friend.

Is Molly the right person to be doing medicals? She's more used to dead people. It's bound to lower your standards.

I can't be seen wandering around with an old man.Madam, can I suggest

Mrs. Hudson: Sherlock, this man was at the door, is the bell still not working?
Mrs. Hudson: He shot it.

There's nothing the matter with me! Imagine I said that without shouting.

you look at this menu? It's, uh, completely identical.

Hello. My name's Jim Moriarty. Welcome to the final problem.

Sir Boast-a-Lot was the bravest and cleverest knight at the round table. But soon, the other knights began to grow tired of his stories about how brave he was and how many dragons he'd slain. And so they began to wonder... are Sir Boast-a-Lot's stories even true?

Get out. I need to go to my mind palace.

This is where I get off.

I wrote my own version of the Nativity when I was a child, "The Hungry Donkey". It was a bit gory, but if you're gonna put a baby in a manger, you're asking for trouble.

Is this a game? A bloody game.

Heaven may be a fantasy for the credulous and the afraid, but I can give you a map reference for Hell.

Memories can resurface. Wounds can reopen. The roads we walk have demons beneath, and yours have been waiting for a very long time.

You might wanna close that window. There is an east wind coming.

We are in Buckingham Palace, the very heart of the British nation. Sherlock Holmes, put your trousers on!

Henry Knight: It's a strange place, the Hollow. Makes you feel so cold inside, so afraid.
Sherlock Holmes: Yes, if I wanted poetry, I'd read John's emails to his girlfriends. Much funnier.

As long as I'm alive, you can save your friends. You've got a way out. Well, good luck with that.

As long as I'm alive, you can save your friends. You've got a way out. Well, good luck with that.

I want you to calculate John's ideal intake and mine to remain in the sweet spot the whole evening.

Well! Glad to see you've pulled, Sherlock, what with murderers running riot at my wedding.

I've dealt with murderers, psychopaths, terrorists, serial killers - none of them can turn my stomach like Charles Augustus Magnussen.

That name you think you may have just heard, you were mistaken. If you ever mention hearing that name in this room, in this context, I guarantee you, on behalf of the British Security Services, that materials will be found on your computer hard-drives resulting in your immediate incarceration. Don't reply, just look frightened and scuttle.

Don't you dare. You made a vow. You swore it.

You're gonna love being dead, Sherlock. No one ever bothers you.

Fear is wisdom in the face of danger. It is nothing to be ashamed of.

I delete any text that begins, "Hi."

Intuitions are not to be ignored, John. They represent data processed too fast for the conscious mind to comprehend.

We hope you enjoyed reading Sherlock quotes. Browse other tv show quotes on Ficquotes also. If you think we missed any quote from Sherlock , please send it to us so we can expand our collection of the best Sherlock quotes.