The Good, the Bad and the Ugly Quotes

Best The Good, the Bad and the Ugly Movie Quotes

The Good, the Bad and the Ugly

The Good, the Bad and the Ugly Quotes 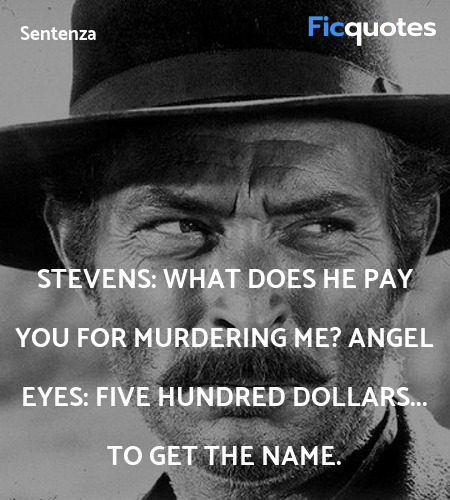 Stevens: What does he pay you for murdering me?
Angel Eyes: Five hundred dollars... to get the name. 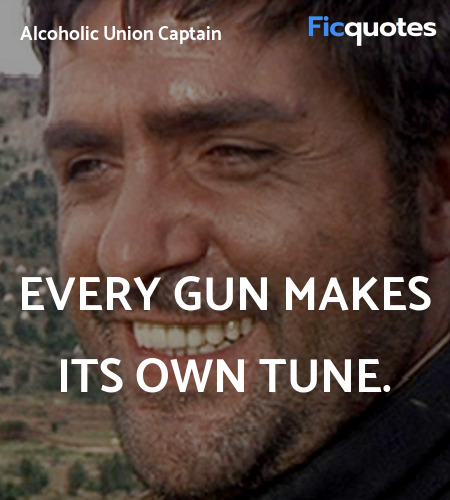 Every gun makes its own tune. 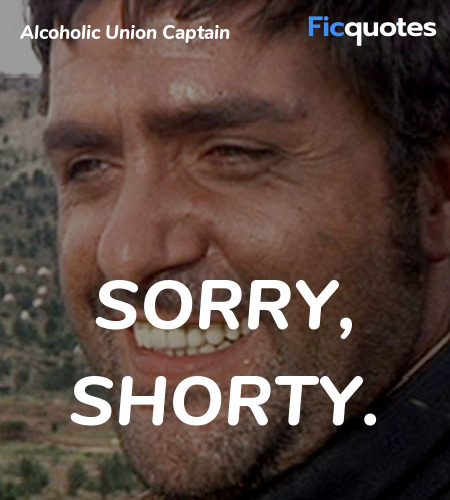 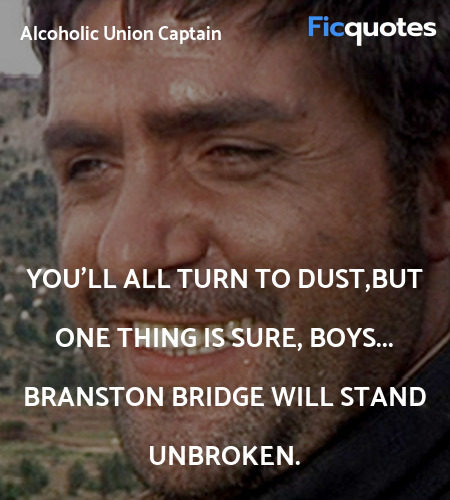 You'll all turn to dust,but one thing is sure, boys... Branston Bridge will stand unbroken.

Whoever has the most liquor to get the soldiers drunk and send them to be slaughtered... he's the winner.

Maria: Is that you Bill? Bill!
Maria: Who are you? What do you want with me?
Angel Eyes: Go on talking about Bill Carson.

You see, in this world there's two kinds of people, my friend: Those with loaded guns and those who dig. You dig.

Baker: Here, this is for you. You did a good job for me. Worth five hundred dollars,
Angel Eyes: Oh I almost forgot. He gave me a thousand. I think his idea was that I kill you.
Angel Eyes: But you know the pity is when I'm paid, I always follow my job through. You know that.
Baker: Noo! Angel Eyes!

Two hundred thousand dollars is a lot of money. We're gonna have to earn it.

If your friends stay out in the damp, they're liable to catch a cold aren't they... or a bullet.

Were you gonna die alone?

Put your drawers on, and take your gun off.

The way I figure, there's really not too much future with a sawed-off runt like you.

Angel Eyes: Even a filthy beggar like that has got a protecting angel.
Angel Eyes: A golden-haired angel watches over him

It's not a joke, it's a rope, Tuco. Now I want you to get up there and put your head in that noose.

Can you help me live a little more? I expect good news.

The most potent weapon of war!

The Rebs have decided that bridge is the key to this whole area. Stupid, useless bridge! Flyspeck on Headquarters' maps. Headquarters has declared we must take that ridiculous flyspeck. Even if all of us are killed. Otherwise the key'll get rusty and just be a spot on the wall.

If you work for a living, why do you kill yourself working?

I've never seen so many men wasted so badly.

Such ingratitude, after all the times I saved your life.

I told you once, friend, if I ever get you down, you're going to need a lot of help to get back up again!

Hey! Hey everybody look! He's giving him the filthy money! JUDAS! You sold my HIDE!

I'm looking for the owner of that horse. He's tall, blonde, he smokes a cigar, and he's a pig!

There are two kinds of people in the world, my friend: Those with a rope around the neck, and the people who have the job of doing the cutting.

You never had a rope around your neck. Well, I'm going to tell you something. When that rope starts to pull tight, you can feel the Devil bite your ass.

I like big fat men like you. When they fall they make more noise. And sometimes they never get up.

While I'm waiting for the Lord to remember me, I, Tuco Ramirez, brother of "Brother" Ramirez will tell you something! You think you're better than I am... where we came from, if one did not want to die in poverty, one became a priest or a bandit! You chose your way, I chose mine. Mine was harder! You talk about Mother and Father... you forget that when you left to become a priest I stayed behind! I must have been ten, twelve, I don't remember which, but I stayed! I tried, but it was no good! Now I'm going to tell you something... you became a priest because you were too much of a coward to do what I do!

Hey, Blond! You know what you are? Just a dirty son-of-a-b-!

One Armed Man: I've been looking for you for 8 months. Whenever I should have had a gun in my right hand, I thought of you. Now I find you in exactly the position that suits me. I had lots of time to learn to shoot with my left.
Tuco: When you have to shoot, shoot. Don't talk.