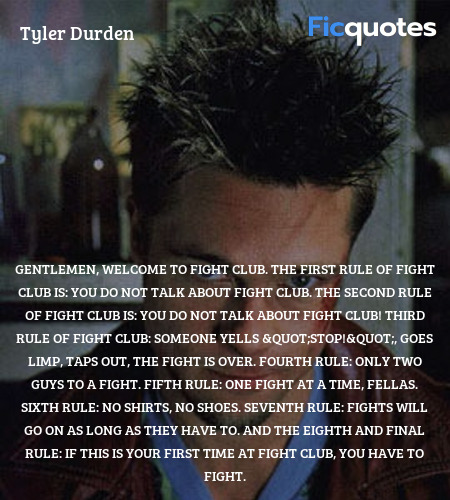 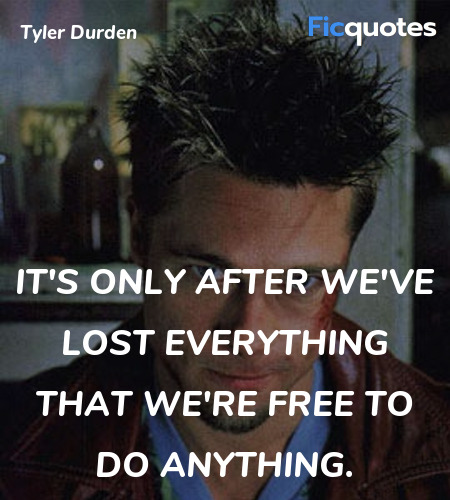 It's only after we've lost everything that we're free to do anything.

This isn't love, it's sport fucking. 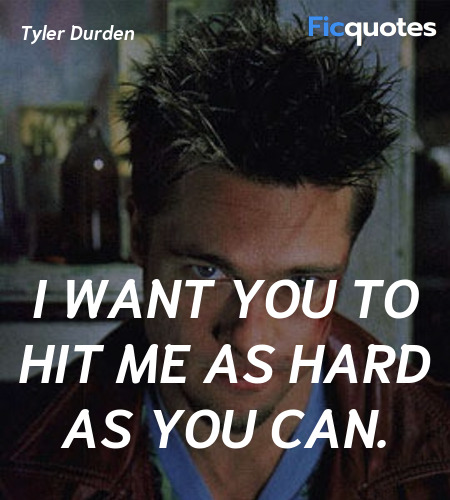 I want you to hit me as hard as you can. 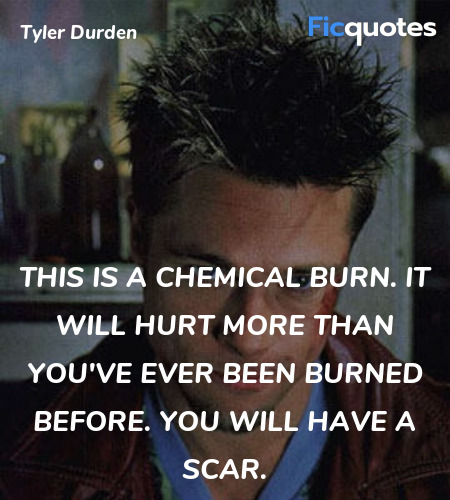 This is a chemical burn. It will hurt more than you've ever been burned before. You will have a scar.

God Damn! We just had a near-life experience, fellas.

It's getting exciting now, two and one-half. Think of everything we've accomplished, man. Out these windows, we will view the collapse of financial history. One step closer to economic equilibrium.

Just tell him you fuckin' did it. Tell him you blew it all up. That's what he wants to hear.

...If you don't claim your humanity you will become a statistic. You have been warned

Reject the basic assumptions of civilization, especially the importance of material possessions.

WHOA! WHOA! OK, you are now firing a gun at your imaginary friend NEAR 400 GALLONS OF NITROGLYCERIN!

Tell him. Tell him, The liberator who destroyed my property has realigned my perceptions.

She's a predator posing as a house pet

In the world I see - you are stalking elk through the damp canyon forests around the ruins of Rockefeller Center. You'll wear leather clothes that will last you the rest of your life. You'll climb the wrist-thick kudzu vines that wrap the Sears Tower. And when you look down, you'll see tiny figures pounding corn, laying strips of venison on the empty car pool lane of some abandoned superhighway.

All right, if the applicant is young, tell him he's too young. Old, too old. Fat, too fat. If the applicant then waits for three days without food, shelter, or encouragement he may then enter and begin his training.

We are all part of the same compost heap.

Fight Club was the beginning, now it's moved out of the basement, it's called Project Mayhem.

The richest, creamiest fat in the world. The fat of the land.

I say never be complete. I say stop being perfect. I say let's evolve. Let the chips fall where they may.

Man, you've got some fucked up friends, I'm tellin' ya. Limber, though...

Something on your mind, dear?

I'll bring us through this. As always. I'll carry you - kicking and screaming - and in the end you'll thank me.

You have a kind of sick desperation in your laugh.

Hi. You're going to call off your rigorous investigation. You're going to publicly state that there is no underground group. Or... these guys are going to take your balls. They're going to send one to the New York Times, one to the LA Times press-release style. Look, the people you are after are the people you depend on. We cook your meals, we haul your trash, we connect your calls, we drive your ambulances. We guard you while you sleep. Do not... fuck with us.

Hitting bottom isn't a weekend retreat. It's not a goddamn seminar. Stop trying to control everything and just let go! LET GO!

Tomorrow will be the most beautiful day of Raymond K. Hessel's life. His breakfast will taste better than any meal you and I have ever tasted.

Fuck off with your sofa units and strine green stripe patterns, I say never be complete, I say stop being perfect, I say let... lets evolve, let the chips fall where they may.

WHOA! WHOA! WHOA! Ok, you are now firing a gun at your 'imaginary friend' near 400 GALLONS OF NITROGLYCERINE!

Hey, you created me. I didn't create some loser alter-ego to make myself feel better. Take some responsibility!

We're a generation of men raised by women. I'm wondering if another woman is really the answer we need.

Sticking feathers up your butt does not make you a chicken.

Warning: If you are reading this then this warning is for you. Every word you read of this useless fine print is another second off your life. Don't you have other things to do? Is your life so empty that you honestly can't think of a better way to spend these moments? Or are you so impressed with authority that you give respect and credence to all that claim it? Do you read everything you're supposed to read? Do you think every thing you're supposed to think? Buy what you're told to want? Get out of your apartment. Meet a member of the opposite sex. Stop the excessive shopping and masturbation. Quit your job. Start a fight. Prove you're alive. If you don't claim your humanity you will become a statistic. You have been warned- Tyler.

Now, a question of etiquette - as I pass, do I give you the ass or the crotch?

Man, I see in fight club the strongest and smartest men who've ever lived. I see all this potential, and I see squandering. God damn it, an entire generation pumping gas, waiting tables; slaves with white collars. Advertising has us chasing cars and clothes, working jobs we hate so we can buy shit we don't need. We're the middle children of history, man. No purpose or place. We have no Great War. No Great Depression. Our Great War's a spiritual war... our Great Depression is our lives. We've all been raised on television to believe that one day we'd all be millionaires, and movie gods, and rock stars. But we won't. And we're slowly learning that fact. And we're very, very pissed off.

Listen up, maggots. You are not special. You are not a beautiful or unique snowflake. You're the same decaying organic matter as everything else.

The things you own end up owning you.