Latest Tuco quotes from The Good, the Bad and the Ugly

Tuco is played by Eli Wallach in The Good, the Bad and the Ugly.

If you work for a living, why do you kill yourself working?

One Armed Man: I've been looking for you for 8 months. Whenever I should have had a gun in my right hand, I thought of you. Now I find you in exactly the position that suits me. I had lots of time to learn to shoot with my left.
Tuco: When you have to shoot, shoot. Don't talk.

Hey, Blond! You know what you are? Just a dirty son-of-a-b-! 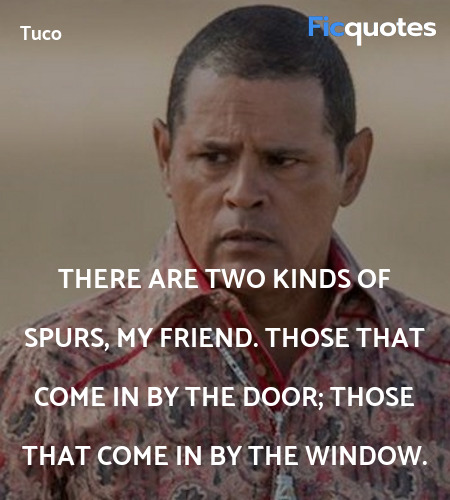 While I'm waiting for the Lord to remember me, I, Tuco Ramirez, brother of "Brother" Ramirez will tell you something! You think you're better than I am... where we came from, if one did not want to die in poverty, one became a priest or a bandit! You chose your way, I chose mine. Mine was harder! You talk about Mother and Father... you forget that when you left to become a priest I stayed behind! I must have been ten, twelve, I don't remember which, but I stayed! I tried, but it was no good! Now I'm going to tell you something... you became a priest because you were too much of a coward to do what I do!

I like big fat men like you. When they fall they make more noise. And sometimes they never get up.

You never had a rope around your neck. Well, I'm going to tell you something. When that rope starts to pull tight, you can feel the Devil bite your ass.

There are two kinds of people in the world, my friend: Those with a rope around the neck, and the people who have the job of doing the cutting.

I'm looking for the owner of that horse. He's tall, blonde, he smokes a cigar, and he's a pig!

Hey! Hey everybody look! He's giving him the filthy money! JUDAS! You sold my HIDE!

I told you once, friend, if I ever get you down, you're going to need a lot of help to get back up again!