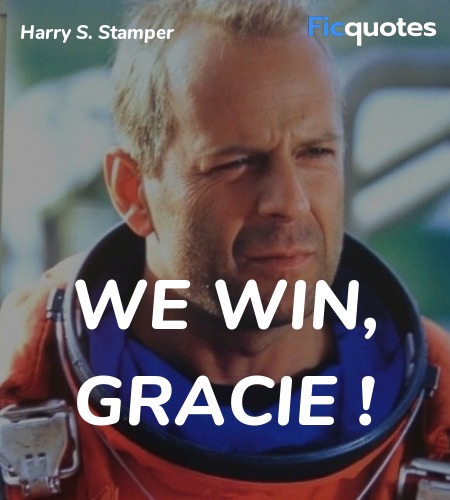 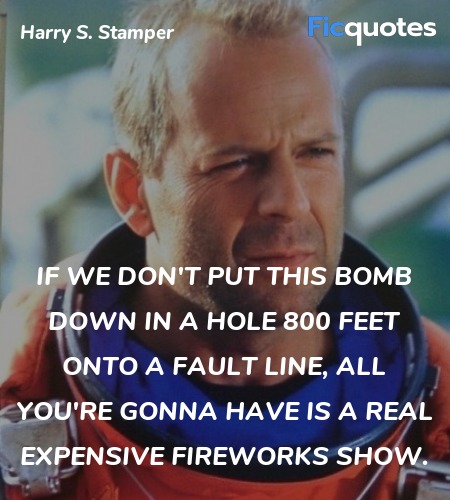 If we don't put this bomb down in a hole 800 feet onto a fault line, all you're gonna have is a real expensive fireworks show. 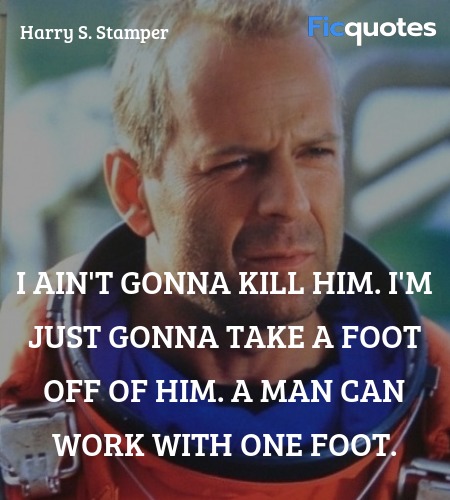 I ain't gonna kill him. I'm just gonna take a foot off of him. A man can work with one foot. 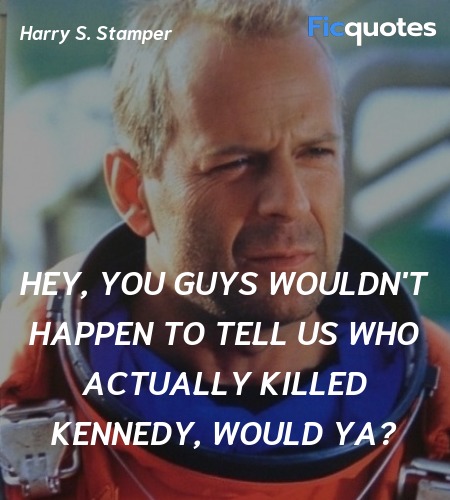 Hey, you guys wouldn't happen to tell us who actually killed Kennedy, would ya?

You know it's all funny until somebody gets shot in the leg.

Harry'll do it. I know it. He doesn't know how to fail.

OK gentleman, you're our warriors up there. God be with you. You're already heroes, just sit back and enjoy the ride.

Grace Stamper : You have not told them yet. That is my father up there!
Dan : This is one order you shouldn't follow and you fucking know it!

If you had like little animal cracker Discovery Channel thing watch the gazelle as he graze's through the open plains, and now look as the cheetah approachs. Watch as he stalks his prey. Now the gazelle has looked spooked and he could head north, to the mountainous peeks above, or he could go south. The gazelle now faces man's most perilous question, north... Or south...

A.J. : This is great. We just happen to run into the Grand Canyon on the asteroid.
Lev Andropov : I told you, you took wrong way, wrong road.
A.J. : What? What road? Do you see any roads around here?
Lev Andropov : You know what, I do not have much pleasure being near God's ear, but you think this is looking good or what?
A.J. : Lev, why don't you just do humanity a favor and just shut the hell up?

A.J. : If anybody's anybody, I'm Han and you're-you're Chewbacca.
Oscar : Chewy? Have you even seen Star Wars?

So, when the rogue comet hit the asteroid belt, it sent shrapnel right for us. For the next 15 days, the Earth's in a shooting gallery. Even if the asteroid itself hits the water, it's still hitting land. It'll flash boil millions of galleons of sea water and slam into the ocean bedrock. Now if it's a Pacific Ocean impact, which we think it will be, it'll create a tidal wave 3 miles high, travel at a thousand miles an hour, covering California, and washing up in Denver. Japan's gone, Australia's wiped out. Half the world's population will be incinerated by the heat blast, and the rest will freeze to death from nuclear winter.

General Kimsey : And the ones this morning?
Dan : Uh, those were nothing. Uh, they're the size of basketballs and, uh, Volkswagens, things like that.

Now let's keep the laughter to a minimum. I know this is not to scale. Both shuttles will take off Tuesday at 6:30pm. Now, 67 minutes later, you're gonna dock with the Russian Space Station to meet cosmonaut Andropov, who will refuel the shuttles with liquid O2 - that's your fuel - then you'll release and take a 60 hour trip toward the moon. Now we only have one shot of landing on this rock, and that's precisely when the asteroid passes by the moon. You'll then use lunar gravity and burn your thrusters, slingshotting you around the moon, coming up behind the asteroid. You'll be upward of 11 G's.

Grace Stamper : Listen, Harry, A.J. is my choice - my choice and not yours.
Harry Stamper : He's the only one in your age bracket, Grace. It's not a choice, it's a lack of options.

Dan : With the proximity of the asteroid, and no prep time, none of our primary plans can work.
General Kimsey : Why don't we just send up a hundred and fifty nuclear warheads and blast that rock apart?
Ronald Quincy : Terrible idea.
General Kimsey : Was I talkin' to you?
Dan : This is Dr. Ronald Quincy from Research. Pretty much the smartest man on the planet You might wanna listen to him.

Karl : Sir, I'm retired navy, I know all about classified. But one more thing. The person that finds her gets to name her right?
Dan : Yes-yes that's right, that's right.
Karl : I wanna name her Dottie after my wife. She's a vicious life-sucking bitch from which there is no escape.

Quincy! Somebody tell me what this is. Plastic ice cream scoop? What'd that cost? About $400.

Harry Stamper : Come on, God, just a little help. It's all I'm asking.
Max : I think we're close enough, He might have heard ya.

I'm gonna give you three seconds to shut this bomb down, and then I'm gonna make you shoot me.

Houston, you have a problem. You see, I promised my little girl that I'd be comin' home. Now I don't know what you people are doing down there, but we've got a hole to dig up here!

Harry Stamper : For god's sakes, think about what you're doin'. Why are you listening to someone that's a 100,000 miles away? We're here, nobody down there can help us. So if we don't get this job done, everybody's gone.
Chick : One minute.
Harry Stamper : I have been drilling holes in the earth for 30 years. And I have never, NEVER missed a depth that I have aimed for. And by God, I am not gonna miss this one, I will make 800 feet.
Chick : 42 seconds.
Harry Stamper : But I can't do it alone, Colonel. I need your help.
Colonel William Sharp : Do you swear on your daughter's life, on my family's, that you can hit that mark?
Harry Stamper : I will make 800 feet. I swear to God I will.
Colonel William Sharp : Then let's turn this bomb off.