Creator:Roberto Aguirre-Sacasa
Starring: K.J. Apa, Lili Reinhart, Camila Mendes
Released on: January 26 ,2017
Taglines: A Great Place to Get Away With It All

Reggie Mantle: I mean let's think about it: if a kid at Riverdale killed Jason, it's not gonna be a jock right? No let's be honest. Isn't it always some spooky, scrawny, pathetic internet troll too busy writing his manifestos to get laid? Some smug, moody, serial killer, fanboy freak... like Jughead?
Reggie Mantle: What was it like, suicide squad? When you killed Jason? You didn't do stuff to the body like... after?
Jughead Jones: It's called necrophilia, Reggie... Can you spell it?
Reggie Mantle: Come here, you little-!
Archie Andrews: Hey shut the hell up, Reggie!
Veronica Lodge: Boys...
Reggie Mantle: What do you care, Andrews?
Archie Andrews: Nothing, just leave him alone. 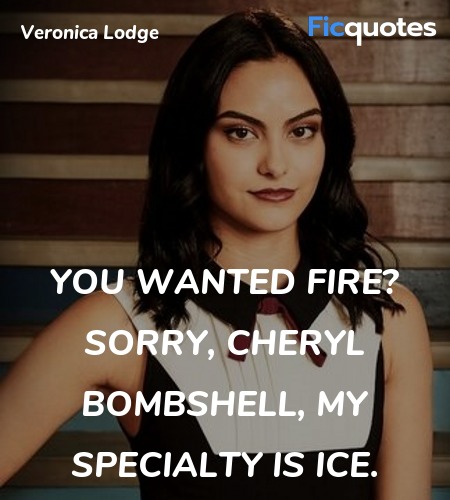 You wanted fire? Sorry, Cheryl Bombshell, my specialty is ice. 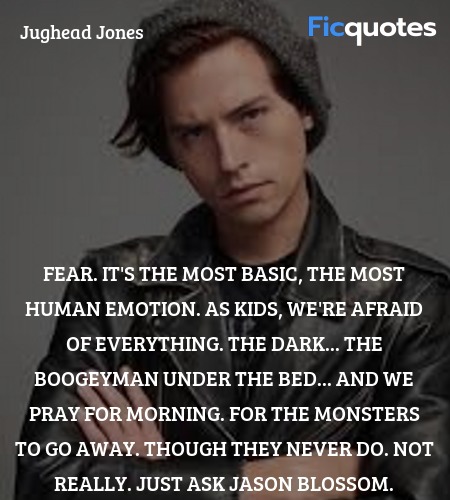 Fear. It's the most basic, the most human emotion. As kids, we're afraid of everything. The dark... The boogeyman under the bed... And we pray for morning. For the monsters to go away. Though they never do. Not really. Just ask Jason Blossom. 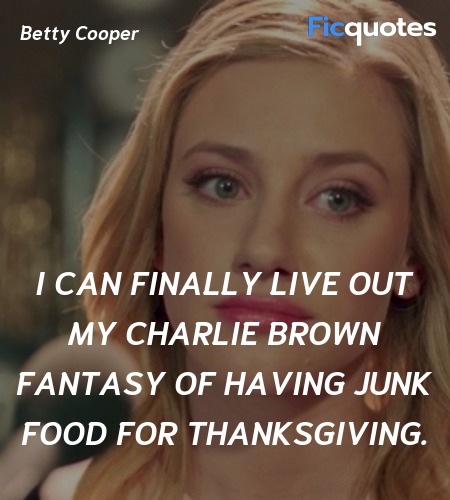 I can finally live out my Charlie Brown fantasy of having junk food for Thanksgiving. 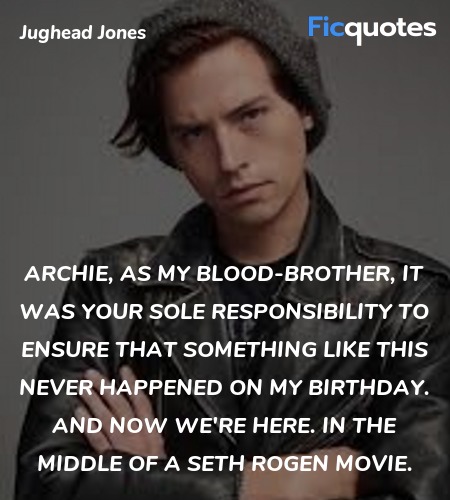 Archie, as my blood-brother, it was your sole responsibility to ensure that something like this never happened on my birthday. And now we're here. In the middle of a Seth Rogen movie.

At it's heart, Riverdale was, and is, a wicked little town.

I thought the farm would keep me safe from the Black Hood, but, bonus, I'm also learning a bunch of fun, terrifying facts about myself.

I don't need you to mob-splain what's best for my family.

People like to say that the death of Jason Blossom changed everything at Riverdale High, but certain things, certain traditions, never change. Take homecoming for instance. Though Jason's jersey had been retired, the Riverdale Bulldogs would still be playing their arch-rivals the Baxter High Ravens with the River Vixens cheering them on. As in previous years, graduates from days of Riverdale past will come to town to relive their more youthful, more carefree days or... To make up for lost time.

We hope you enjoyed reading Riverdale quotes. Browse other tv show quotes on Ficquotes also. If you think we missed any quote from Riverdale , please send it to us so we can expand our collection of the best Riverdale quotes.