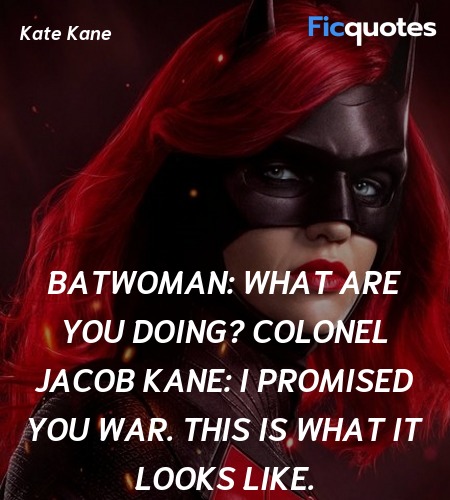 Batwoman: What are you doing?
Colonel Jacob Kane: I promised you war. This is what it looks like. 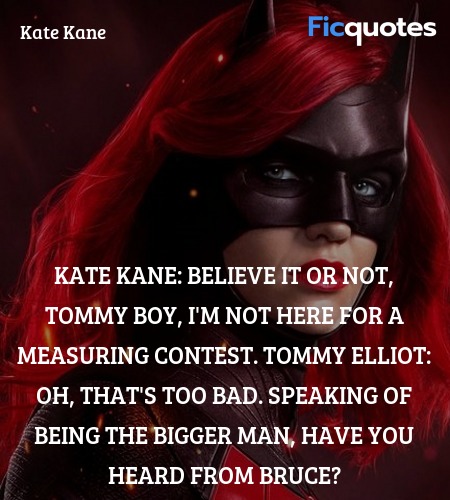 Kate Kane: Believe it or not, Tommy Boy, I'm not here for a measuring contest.
Tommy Elliot: Oh, that's too bad. Speaking of being the bigger man, have you heard from Bruce?

You're not asking the right questions, Kate. What is my evil plan? Who am I targeting next? How am i going to do it? When you really need to be asking why? Why am I like this? 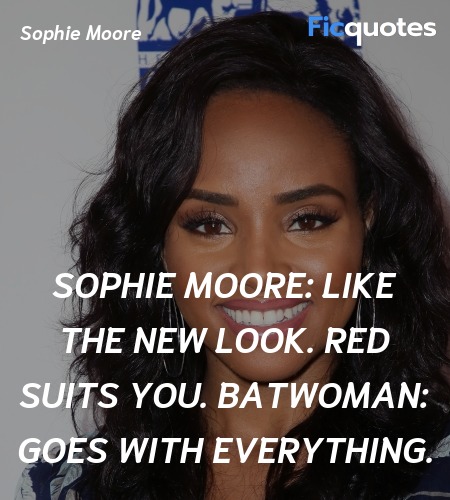 Sophie Moore: Like the new look. Red suits you.
Batwoman: Goes with everything. 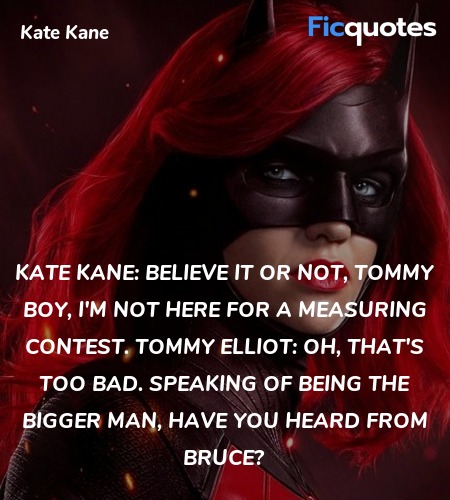 Kate Kane: Believe it or not, Tommy Boy, I'm not here for a measuring contest.
Tommy Elliot: Oh, that's too bad. Speaking of being the bigger man, have you heard from Bruce?

No, I'm not sleeping with someone. But can we please pause for a moment to appreciate that those words came out of your mouth?

Kate Kane: Magpie is your sister?
Reagan: Surprise.
Kate Kane: Why did she want it?
Reagan: It bought her her freedom out of Arkham.
Kate Kane: Who did she give it to?
Reagan: I don't know. I don't ask for details for exactly this reason. Besides, by now, it's lost up the food chain, she's in the wind. I told all of this to your friend.
Kate Kane: What? What friend?
Reagan: Blonde chick with the British accent. She cornered me in a parking lot, put a knife to my throat, didn't stop to give a name.

Alice: Kate, have I ever lied to you?
Kate Kane: Literally dozens of times.
Alice: Yeah, okay.

Beth Kane: Kate, you're hurting me.
Kate Kane: Not yet, but I will.

Sophie Moore: You ever feel like you're hiding from the world.
Kate Kane: I'm literally standing in a shadow.

Batman was praised and revered, but Bruce Wayne not so much. No one knew the man beneath the cowl. You didn't let them in, Bruce, for good reason. Because even the people we love are still people at the end of the day. They act out of fear, pride, hope, pain, and sometimes, they let us down, but you know better than I do that no one can be a lone wolf forever. I have to let people in even if it's just one person and one small piece of myself at a time.

Kate Kane: How do you know who he is?
Tommy Elliot: You mean Batman?
Tommy Elliot: Oops! Did I say that out loud?
Kate Kane: How do you know that?
Tommy Elliot: Oh, because a few months ago, I paid a man to riddle me the answer. Gotta love the honorable Bruce Wayne for designing a fail-safe so he could never become too powerful in a super-suit. Such a great guy.
Kate Kane: He's your best friend.
Tommy Elliot: Yeah, he was. The bestest. Nothing could be average with Bruce. Even had to have more dead parents than me.
Kate Kane: Because he saved your mom's life?
Tommy Elliot: Oh, yeah. No, I am aware. Thanks to him, instead of collecting my inheritance, I was left wiping the spittle off of a jabbering madwoman's lips for 13 years.
Kate Kane: You wanted him dead, why wait until he's in a bulletproof suit?
Tommy Elliot: Because Bruce didn't ruin my life. Batman did. Do you know what it's like to have the villain of your story be the hero of your city? He is a monster who left me anchored to a repulsive, gold-digging bitch, and now he's gonna die.

Sophie Moore: Is this you?
Kate Kane: What? This-this dude in the picture?
Sophie Moore: The person in this picture dressed at Batman who saved my life the other night. Was that you?
Kate Kane: Anyone who knows me knows I hate Batman.
Sophie Moore: So does your dad. Which would make putting on the suit makes an incredibly reckless move.
Kate Kane: Wasn't me. Beside, if I were going to save you in a dramatic fashion, I would totally dress as Wonder Woman.

We hope you enjoyed reading Batwoman quotes. Browse other tv show quotes on Ficquotes also. If you think we missed any quote from Batwoman, please send it to us so we can expand our collection of the best Batwoman quotes.