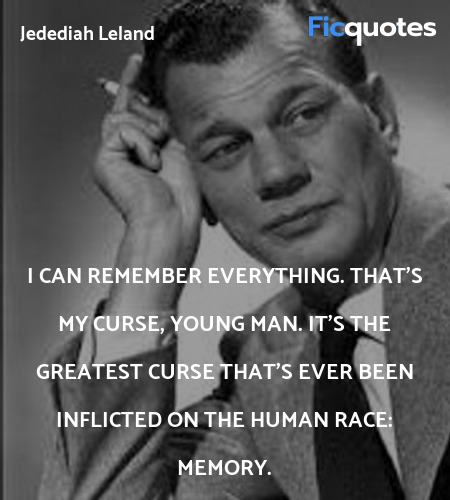 I can remember everything. That's my curse, young man. It's the greatest curse that's ever been inflicted on the human race: memory. 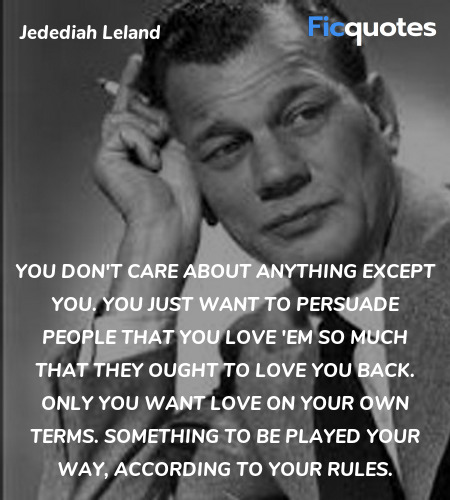 You don't care about anything except you. You just want to persuade people that you love 'em so much that they ought to love you back. Only you want love on your own terms. Something to be played your way, according to your rules. 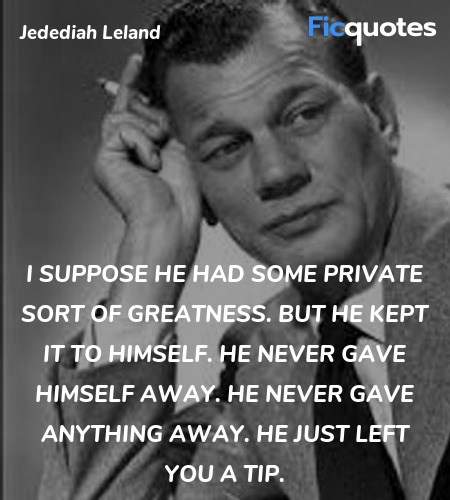 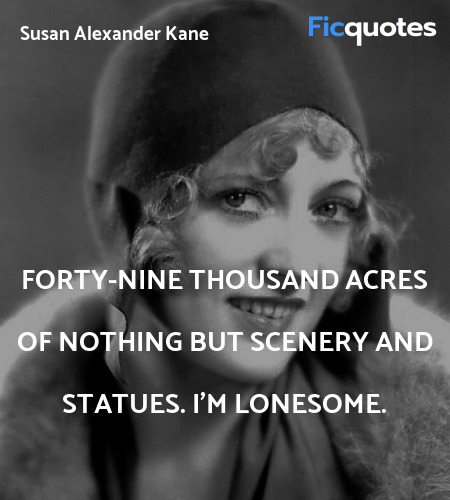 Forty-nine thousand acres of nothing but scenery and statues. I'm lonesome.

Well what do you know? It's morning already. You must come around and tell me the story of YOUR life sometime.

Old age. It's the only disease, Mr. Thompson, that you don't look forward to being cured of.

President's niece, huh? Before Mr. Kane's through with her, she'll be a president's wife.

Mr. Kane is finishing the review you started - he's writing a bad notice. I guess that'll show you.

Who's the busiest man? Me? I've got nothing but time! What do you wanna know?

That's all he ever wanted out of life... was love. That's the tragedy of Charles Foster Kane. You see, he just didn't have any to give.

I suppose he had a private sort of greatness, but he kept it to himself.

Love! You don't love anybody! Me or anybody else! You want to be loved - that's all you want! I'm Charles Foster Kane. Whatever you want - just name it and it's yours! Only love me! Don't expect me to love you!

A fellow will remember a lot of things you wouldn't think he'd remember. You take me. One day, back in 1896, I was crossing over to Jersey on the ferry, and as we pulled out, there was another ferry pulling in, and on it there was a girl waiting to get off. A white dress she had on. She was carrying a white parasol. I only saw her for one second. She didn't see me at all, but I'll bet a month hasn't gone by since that I haven't thought of that girl.

Harvard, Yale, Princeton, Cornell, Switzerland... he was thrown out of a lot of colleges.

We never lost as much as we made.