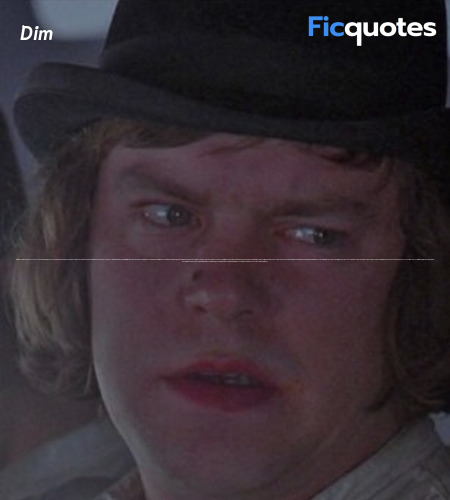 Dim: What did you do that for?
Alex: For being a bastard with no manners, and not a dook of an idea how to comport yourself public-wise, O my brother.
Dim: I don't like you should do what you done, and I'm not your brother no more and wouldn't want to be.
Alex: Watch that. Do watch that, O Dim, if to continue to be on live thou dost wish.
Dim: Yarbles! Great bolshy yarblockos to you. I'll meet you with chain or nozh or britva anytime, not having you aiming tolchocks at me reasonless. Well, it stands to reason I won't have it.
Alex: A nozh scrap any time you say.
Dim: Doobidoob. A bit tired, maybe. Best not to say more. Bedways is rightways now, so best we go homeways and get a bit of spatchka. Right, right? 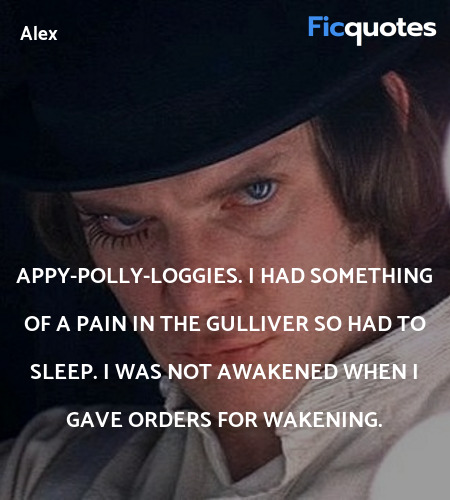 Appy-polly-loggies. I had something of a pain in the gulliver so had to sleep. I was not awakened when I gave orders for wakening. 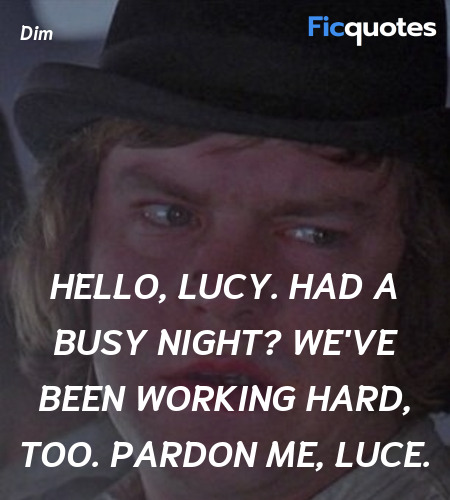 Hello, Lucy. Had a busy night? We've been working hard, too. Pardon me, Luce. 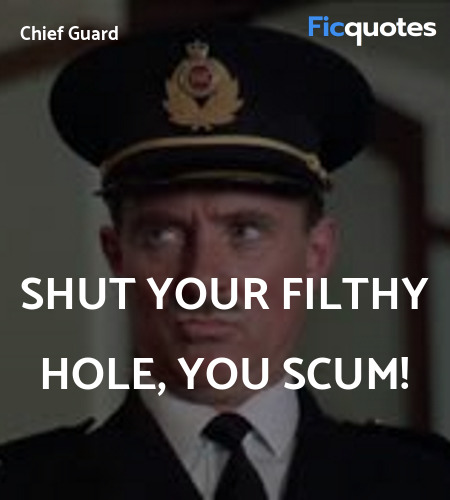 Shut your filthy hole, you scum!

Frank Alexander: Who on Earth could that be?
Mrs. Alexander: I'll go and see.

She was very badly raped, you see! We were assaulted by a gang of vicious, young, hoodlums in this house! In this very room you are sitting in now! I was left a helpless cripple, but for her the agony was too great! The doctor said it was pneumonia; because it happened some months later! During a flu epidemic! The doctors told me it was pneumonia, but I knew what it was! A VICTIM OF THE MODERN AGE! Poor, poor girl!

Missus! It's a matter of life and death!

One thing I could never stand was to see a filthy, dirty old drunkie, howling away at the filthy songs of his fathers and going blurp blurp in between as it might be a filthy old orchestra in his stinking, rotten guts. I could never stand to see anyone like that, whatever his age might be, but more especially when he was real old like this one was.

And the first thing that flashed into my gulliver was that I'd like to have her right down there on the floor with the old in-out, real savage.

Suddenly, I viddied what I had to do, and what I had wanted to do, and that was to do myself in; to snuff it, to blast off for ever out of this wicked, cruel world. One moment of pain perhaps and, then, sleep for ever, and ever and ever.

Hi, hi, hi there! At last we meet. Our brief govoreet through the letter-hole was not, shall we say, satisfactory, yes?

Enjoying that are you my darlin'? Bit cold and pointless isn't it my lovely? What's happened to yours my little sister?

I was cured, all right!

It had been a wonderful evening and what I needed now to give it the perfect ending was a bit of the old Ludwig van.

There was me, that is Alex, and my three droogs, that is Pete, Georgie, and Dim, and we sat in the Korova Milkbar trying to make up our rassoodocks what to do with the evening. The Korova milkbar sold milk-plus, milk plus vellocet or synthemesc or drencrom, which is what we were drinking. This would sharpen you up and make you ready for a bit of the old ultra-violence.

Oh bliss! Bliss and heaven! Oh, it was gorgeousness and gorgeousity made flesh. It was like a bird of rarest-spun heaven metal or like silvery wine flowing in a spaceship, gravity all nonsense now. As I slooshied, I knew such lovely pictures!

Pick that up and put it down properly!

No time for the old in-n-out, love, I've just come to read the meter.

Are you now, or have you ever been a homosexual?

Ho, ho, ho! Well, if it isn't fat stinking billy goat Billy Boy in poison! How art thou, thou globby bottle of cheap, stinking chip oil? Come and get one in the yarbles, if ya have any yarbles, you eunuch jelly thou!

As we walked along the flatblock marina, I was calm on the outside, but thinking all the time. So now it was to be Georgie the general, saying what we should do and what not to do, and Dim as his mindless greeding bulldog. But suddenly I viddied that thinking was for the gloopy ones and that the oomny ones use, like, inspiration and what Bog sends. For now it was lovely music that came to my aid. There was a window open with the stereo on and I viddied right at once what to do.

I woke up. The pain and sickness all over me like an animal. Then I realized what it was. The music coming up from the floor was our old friend, Ludwig Van, and the dreaded Ninth Symphony.

What we were after now was the old surprise visit. That was a real kick and good for laughs and lashings of the old ultraviolent.

What you got back home, little sister, to play your fuzzy warbles on? I bet you got little save pitiful, portable picnic players. Come with uncle and hear all proper! Hear angel trumpets and devil trombones. You are invited.

Excuse me, Mrs. Can you please help? There's been a terrible accident! My friend's in the middle of the road bleeding to death! Can I please use your telephone for an ambulance?

The Durango '95 purred away a real horrowshow - a nice, warm vibraty feeling all through your guttiwuts. And soon it was trees and dark, my brothers, with real country dark.

It's funny how the colors of the real world only seem really real when you viddy them on the screen.

We were all feeling a bit shagged and fagged and fashed, it being a night of no small expenditure.

Initiative comes to thems that wait.

I jumped, O my brothers, and I fell hard but I did not snuff it, oh no. if I had snuffed it, I would not be here to tell what I have told.