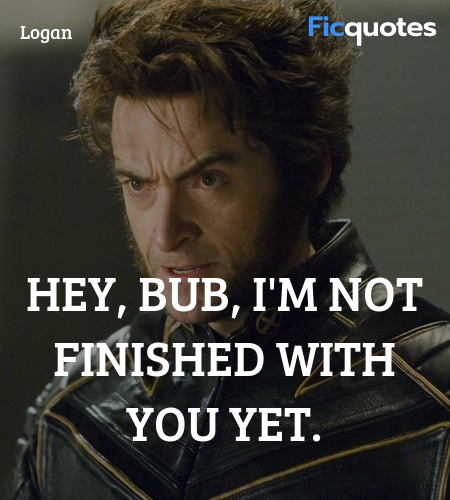 Hey, bub, I'm not finished with you yet. 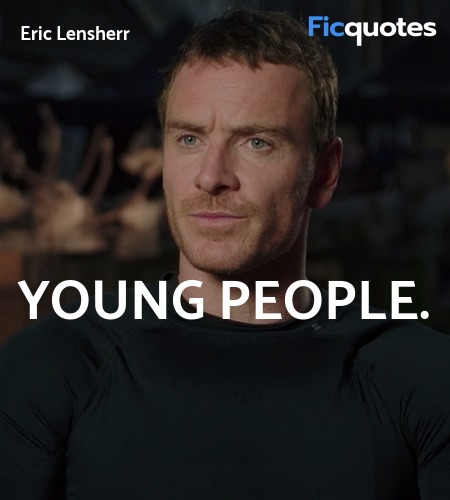 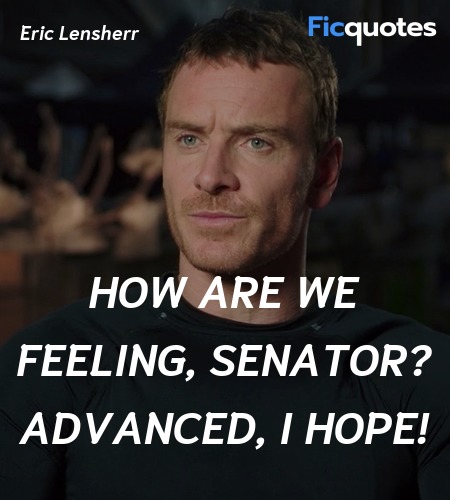 How are we feeling, Senator? Advanced, I hope! 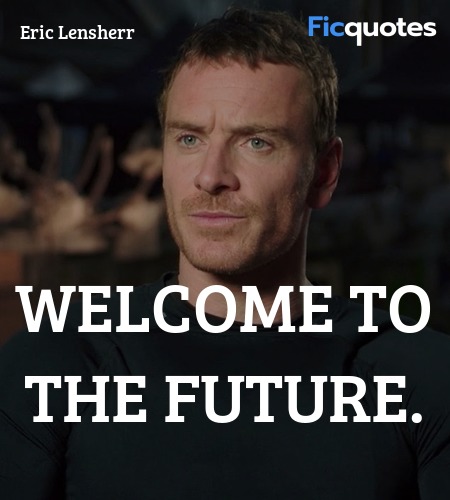 Welcome to the future.

Senator Kelly : What'd you do with Henry?

Toad has a wicked tongue, Senator. Just like you.

Mankind is not evil, just... uninformed.

Well, it certainly is a big, round room.

Mutants are not the ones mankind should fear.

Logan : Everybody get out of here!

Senator Kelly : I have here a list of names of identified mutants living right here in the United States.
Dr. Jean Grey : Senator...
Senator Kelly : Here's a girl in Illinois who can walk through walls. Now what's to stop her from walking into a bank vault, or the White House, or
Senator Kelly : into their houses?
Dr. Jean Grey : Senator, please...
Senator Kelly : ...and there are even rumors, Miss Grey, of mutants so powerful that they can enter our minds and control our thoughts, taking away our God-given free will. Now I think the American people deserve the right to decide if they want their children to be in school with mutants. To be taught by mutants! Ladies and gentlemen, the truth is that mutants are very real, and that they are among us. We must know who they are, and above all, what they can do!

Cyclops : Sorry.
Wolverine : You call that a landing?

Dr. Jean Grey : Ladies and gentlemen, we are now seeing the beginnings of another stage of human evolution. These mutations manifest at puberty, and are often triggered by periods of heightened emotional stress.
Senator Kelly : Thank you, Miss Grey! That was-quite educational. However it fails to address the issue which is the focus of this hearing. Three words: are mutants dangerous.
Dr. Jean Grey : That's an unfair question, Senator Kelly. After all, the wrong person behind the wheel of a car can be dangerous.
Senator Kelly : Well, we do license people to drive.
Dr. Jean Grey : But not to live.

Magneto : Ah, my brothers, welcome.
Magneto : And you, let's point those claws of your in the safer direction.

Wolverine : You actually go outside in these things?
Cyclops : Well, what would you prefer, yellow spandex?

Magneto : Your aide, Mr. Gyrich, has been dead for some time, senator. I've had Mystique here keep you company. She takes so many shapes.

Wolverine : You going to tell me to stay away from your girl?
Cyclops : If I had to do that, she wouldn't be my girl.
Wolverine : Well, then I guess you've got nothing to worry about, do ya, Cyclops?
Cyclops : It must burn you up that a boy like me saved your life, huh? Gotta be careful. I might not be there next time. Oh, and Logan - stay away from my girl.

Wolverine : Gotta get her out of there. Cyclops, can you hit it?
Cyclops : The ring's moving too fast.
Wolverine : Just shoot it!
Cyclops : I'll kill her!

Rogue : When they come out... does it hurt?
Wolverine : Every time.

Senator Kelly : What the hell have you done to me?
Magneto : Senator, this is pointless. Where would you go? Who would take you in now that your one of us?

Senator Kelly : What are you going to do?
Magneto : Let's just say God works too slow.

Magneto : Are you a God-fearing man, Senator? That is such a strange phrase. I've always thought of God as a teacher; a bringer of light, wisdom, and understanding. You see, I think what you really fear is me. Me and my kind. The Brotherhood of Mutants. Oh, it's not so surprising really. Mankind has always feared what it doesn't understand. Well, don't fear God, Senator, and certainly don't fear me. Not any more.
Senator Kelly : What are you going to do?
Magneto : Let's just say, God works too slow.

Mutation: it is the key to our evolution. It has enabled us to evolve from a single-celled organism into the dominant species on the planet. This process is slow, and normally taking thousands and thousands of years. But every few hundred millennia, evolution leaps forward.

Wolverine : Magneto's right: there is a war coming. Are you sure you're on the right side?
Storm : At least I've chosen a side.

Rogue : The first boy I ever kissed ended up in a coma for three weeks. I can still feel him inside my head. It's the same with you.
Wolverine : There's not many people that'll understand what you're going through. But I think this guy, Xavier, is one of them. He seems to genuinely want to help you. And that's a rare thing, for people like us. So... what do you say, we give these geeks one more shot?
Wolverine : C'mon, I'll take care of you.
Rogue : You promise?
Wolverine : Yeah... Yeah, I promise.

Rogue : You don't have anything to eat, do you?
Rogue : I'm Rogue.
Rogue : Were you in the army? Doesn't, doesn't that mean you were in the army?
Rogue : Wow.
Logan : What?
Rogue : It's just that, suddenly my life doesn't look that bad.
Logan : Well, if you prefer the road...
Rogue : No, it looks great. It looks cozy.
Logan : Put your hands on the heater.
Logan : I'm not gonna hurt you kid.
Rogue : It's nothing personal. It's just that, when people touch my skin, something happens.
Logan : What?
Rogue : I don't know, they just get hurt.
Logan : Fair enough. So, what kind of name is Rogue?
Rogue : I don't know. What kind of name is Wolverine?
Logan : My name is Logan.
Rogue : Marie.
Storm : Logan, is that you?
Wolverin Something is wrong.
Storm : Come on. We need to regroup.
Wolverine : There's just one problem.
Wolverine : You're not part of the group!

Rogue : You know, you should wear your seat belt.
Wolverine : Now look, kid, I don't need advice on auto...