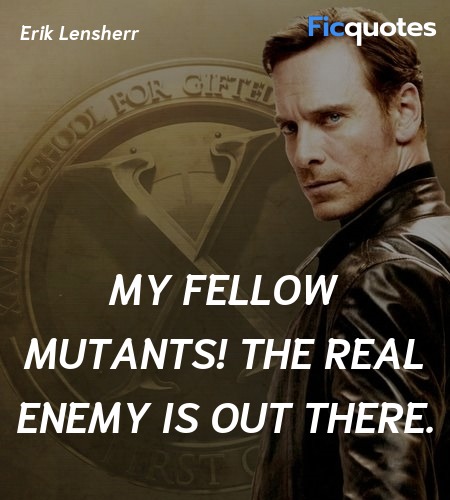 My fellow Mutants! The real enemy is out there.

Outstanding, Erik. So we unlock your gift with anger. Anger and pain. You and me... we're going to have a lot of fun together.

Sebastian Shaw : I hear you blocked the proposal to position nuclear missiles in Turkey. I expect you'll reconsider.
Colonel Hendry : We've had this conversation. You put our nukes in Turkey or anywhere that close to Russia, and you're looking at war. Nuclear war.
Sebastian Shaw : I don't ask for favors, Colonel. I express my expectations. So, let me say it again. I EXPECT you'll reconsider.
Colonel Hendry : The only thing I'll reconsider is having another glass of that delicious champagne.
Emma Frost : You thinking of running? Hiding? We'd find you, Hendry. There's not a fortress in the world that could keep us out.
Sebastian Shaw : Magnificent, isn't she, Bob? Genetic mutation. The evolution of the human genome. Where's Azazel?
Sebastian Shaw : Ah, we don't want the colonel to be late.

We are the children of the atom. Radiation gave birth to mutants. What will kill the humans will only make us stronger.

Raven Darkholme : Darwin's dead, Charles, and we can't even bury him.
Erik Lehnsherr : We can avenge him!

1st German : Who... What are you?
Erik Lehnsherr : Let's just say I'm Frankenstein's monster. And I'm looking for my creator.

Professor Charles Xavier : Erik, don't do this! Be the better man! If you do this there will be no turning back...!
Erik Lehnsherr : Sorry Charles. It's not that I don't trust you...

Professor Charles Xavier : They're just kids...
Erik Lehnsherr : No, they WERE kids. Shaw has his army, we need ours.

Erik Lehnsherr : What an adorable lab rat you make, Charles.
Professor Charles Xavier : Don't spoil this for me, Erik.
Erik Lehnsherr : I've been a lab rat. I know when I see one