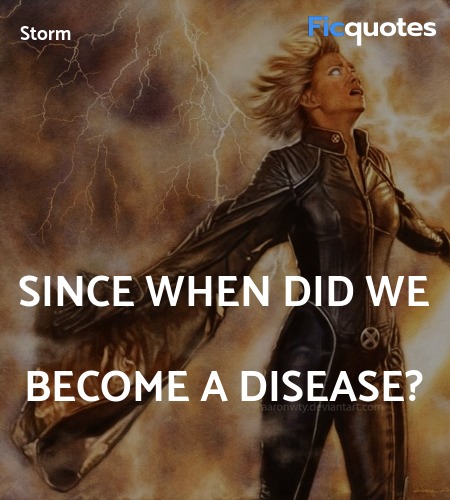 Since when did we become a disease? 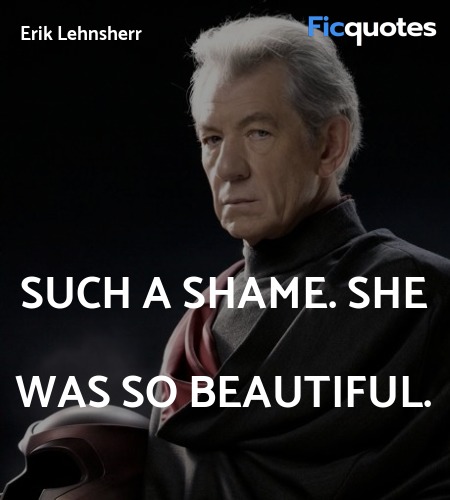 Such a shame. She was so beautiful. 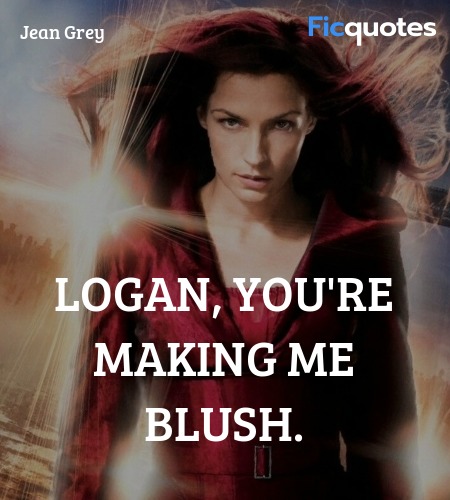 Logan, you're making me blush.

Traitors to their own cause...

In a game of chess the pawns go first.

I'm the only one who can stop her.

The whole world's goin' to hell, you're just gonna sit there?

That was my last cigar.

Don't get your panties in a bunch.

I'm not your father. I'm your friend.

John Allerdyce : Now, check this out. "Prisoner must be confined at all times. If he builds any momentum, no object can stop him."
Eric Lensherr : How fascinating. And what do they call you?
Cain Marko : Juggernaut.
Eric Lensherr : I can't imagine why.

Eric Lensherr : They wish to cure us. But I say to you, WE are the cure! The cure for that infirm, imperfect condition called "Homo sapiens"! They have their weapons...
Eric Lensherr : ... we have ours. We will strike with a vengeance and a fury that this world has never witnessed! And if any mutants stand in our way, we will use this poison against them! We shall go to Alcatraz Island, take control of the cure, and destroy its source! And then, nothing can stop us!

Mutant Theatre Organizer : This cure is voluntary. Nobody's is talking about extermination.
Eric Lensherr : No one ever talks about it. They just do it. And you go on with your lives, ignoring the signs all around you. And then, one day, when the air is still and the night has fallen, they come for you.
Mutant Theatre Organizer : Excuse me, but...
Eric Lensherr : It's only that you realize, while you were talking about organizing and committees, the extermination has already begun. Make no mistake, my brothers. They will draw first blood. They will force their cure upon us. The only question is, will my brotherhood and fight, or wait for the inevitable genocide? Who will you stand with - the humans... or us?

Callisto : I just sensed a mutant, off the charts. Whoever it is, they're more powerful than even you are...
Eric Lensherr : Where is she?

John Allerdyce : Multiple Man, he robbed 7 banks... at once
Eric Lensherr : Impressive. I could use a man of your talents

Since the dawn of existence, there have always been moments when the course of history shifted. Such a turning point is upon us now: the conflict between the better and worst angels of our very nature, whose outcome will change our world so greatly there will be no going back. I do not know if victory is possible. I only know that great sacrifice will be required. And because the fate of many will depend on a few, we must make the last stand.

Don't let it control you.

I don't have to be psychic to see that something's bothering you.

Mutants and humans. They have long struggled to coexist. While some try to unite the world, others try to dominate it. Neither strategy has prevailed. But when conflicts reach an impasse, inevitably something happens to shift the balance forever.

Back where we first met... only I'm in your place, and you're in mine.

Cain Marko : How we supposed to get there? Cause I don't swim.
Eric Lensherr : I think I can take care of that...

Raven Darkholme : Eric?
Eric Lensherr : I'm sorry, my dear. You're not one of us anymore.

Ororo Munroe : I love what you've done with your hair.
Dr. Hank McCoy : Mmm. You too.

We live in an age of darkness: a world full of fear, hate and intolerance. But in every age, there are those who fight against it. Charles Xavier was born into a world divided, a world he tried to heal... a mission he never saw accomplished. It seems it's the destiny of great men to see their goals unfulfilled. Charles was more than a leader, more than a teacher. He was a friend. When we were afraid, he gave us strength. When we were alone, he gave us a family. He may be gone, but his teachings live on through us, his students. Wherever we may go, we must carry on his vision. And that is a vision of a world united.

Logan : This isn't training anymore, guys. This is the real deal... You may never come back.
Bobby Drake : Logan, we're not kids anymore.

Bobby Drake : There's only six of us, Logan.
Logan : Yeah. We're outnumbered. I'm not gonna lie to you. But we lost Scott. We lost the Professor. If we don't fight now, everything they stood for will die with them. I'm not gonna let that happen. Are you?
Logan : Then we stand together... X-Men, all of us.

Logan : Need a lift kid?
Marie : No
Logan : Where are you going?
Marie : You don't know what it's like to be afraid of your powers... afraid to get close to anybody
Logan : Yeah, I do
Marie : I want to be able to touch Logan... a hug... a handshake... a kiss
Logan : I hope you're not doing this for some boy
Logan : Look, if you want to go, then go... just be sure it's what you want
Marie : Shouldn't you be telling me to stay... to go upstairs and unpack?
Logan : I'm not you father, I'm your friend
Logan : Just think about what I said Rogue
Marie : Marie
Logan : Marie

Limb-Growing Mutant : Come on.
Logan : Grow those back.

The President : And now, it's my great pleasure to introduce the American Ambassador for the United Nations: Dr. Hank McCoy!
Dr. Hank McCoy : Thank you...
Logan : Way to go, furball.