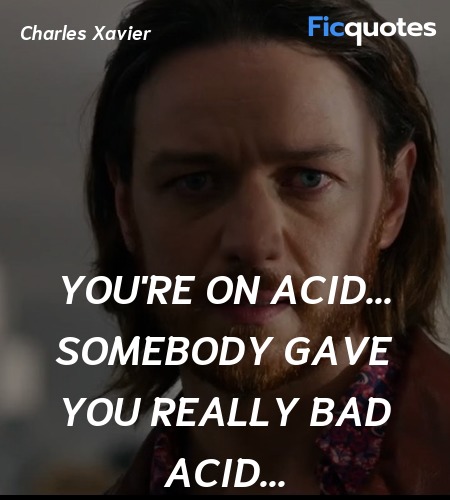 You're on acid... somebody gave you really bad acid... 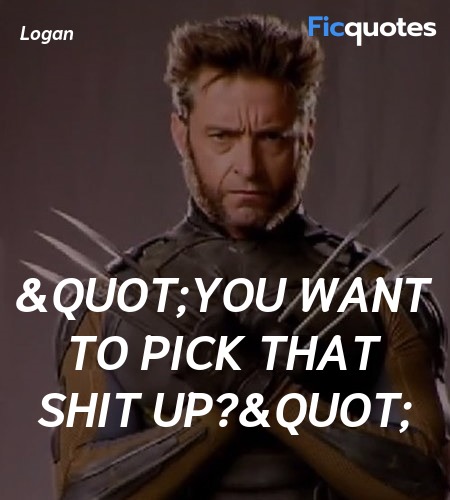 "You want to pick that shit up?" 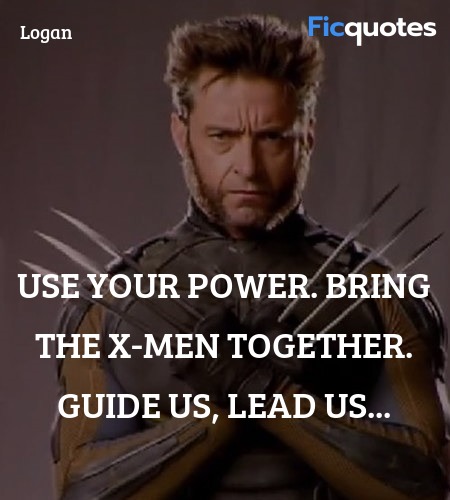 Use your power. Bring the X-Men together. Guide us, lead us... 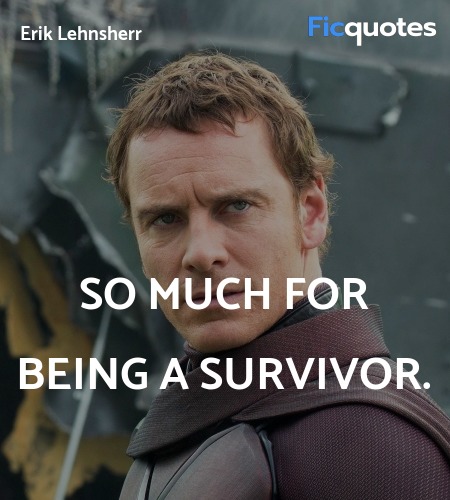 So much for being a survivor.

Imagine if they were metal...

Do what you were made for!

Logan : Here's how this is going to play out, you're going to give me your keys and cash for gas.
Pinstripe Mafioso : Why, because you're from the future?
Logan : No, because of THESE.

Hank McCoy : The power's back on.
Charles Xavier : Yes. Yes, it is.

Hank McCoy : He is fascinating!
Charles Xavier : He's a pain in the ass.

What's the matter, baby? You don't think I look pretty like this?

Bishop : We can't stop that many!
Storm : No. But we can slow them down!

You built these weapons to destroy us. Why? Because you are afraid of our gifts. Because we are different. Humanity has always feared that which is different. Well, I'm here to tell you, to tell the world, you're right to fear us! We are the future! We are the ones who will inherit this earth! And anyone who stands in our way will suffer the same fate as these men you see before you! Today was meant to be a display of your power. Instead, I give you a glimpse of the devastation my race can unleash upon yours! Let this be a warning to the world. And to my mutant brothers and sisters out there, I say this: no more hiding. No more suffering. You have lived in the shadows in shame and fear for too long. Come out. Join me. Fight together in a brotherhood of our kind! A new tomorrow, that starts today!

I don't blame Erik for trying to kill me. I would have done the same thing.

Pietro Maximoff : Do you know karate?
Erik Lehnsherr : I don't know karate. But I know crazy.

Groundskeeper : Excuse me, can I help you?
Erik Lehnsherr : No. You can't.

I can hide, like you. But what about the ones who can't? I saw them in Vietnam. It's hard to hide your powers when you're getting shot at. The ones who couldn't hide, became lab rats for Trask!

I have compassion... just not for Trask. He's murdered too many of us.

So, you always were an asshole.

You know, I think I do remember you now. Yeah... a tall angry fellow with contentious hair. We came to you a long time ago seeking your help. And I'm gonna say to you what you said to us then: fuck off!

Hank McCoy : What if, whatever we do can't be changed? What if Raven will kill Trask anyway? What if that is who she is?
Charles Xavier : Just because someone stumbles and loses their path, doesn't mean they're lost forever.

The past: a new and uncertain world. A world of endless possibilities and infinite outcomes. Countless choices define our fate: each choice, each moment, a moment in the ripple of time. Enough ripple, and you change the tide... for the future is never truly set.

Hank McCoy : I rigged up this communications device to allow us to see all the networks America is airing!
Logan : Wow, all three networks.
Hank McCoy : And PBS!

In the beginning the Sentinels were just targeting mutants. Then they began to identify the genetics in non-mutants who'd eventually have mutant children or grandchildren, and they started targeting everyone. Many of the humans tried to help us, it was a slaughter... leaving only the worst of humanity in charge. I've been in a lot of wars, I've never seen anything like this. And it all starts with her.

Logan : I know a guy. He can get into anywhere.
Hank McCoy : A teleporter?
Logan : No, he's just fast.

Logan : So I wake up in my younger body, God knows where, and then what?
Professor X : You'll need to go to my house and find me. Convince me of all this.
Logan : Won't you be able to read my mind?
Professor X : I didn't have my powers in 1973. Logan, you're going to have to do for me what I once did for you: lead me, guide me. I was a very different man then. You'll have to be patient with me.
Logan : Patience isn't my strongest suit.
Magneto : You'll need me as well.
Logan : What?
Magneto : After Mystique left Charles, she came with me, and I set her on a dangerous path, a darker path. It's going to take the two of us, side by side at a time when we couldn't be further apart.
Logan : Great. So where do I find you?
Magneto : Well, it's complicated...

Hank McCoy : I probably shouldn't be asking this sort of thing... but in the future, do I make it?
Logan : No.
Logan : But we can change that, right?

Will X-Men Days of Future Past Suck?