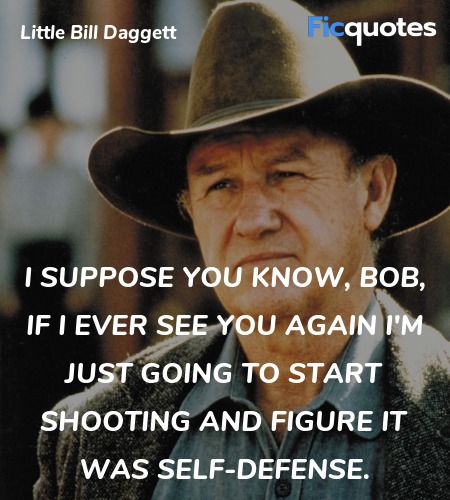 I suppose you know, Bob, if I ever see you again I'm just going to start shooting and figure it was self-defense. 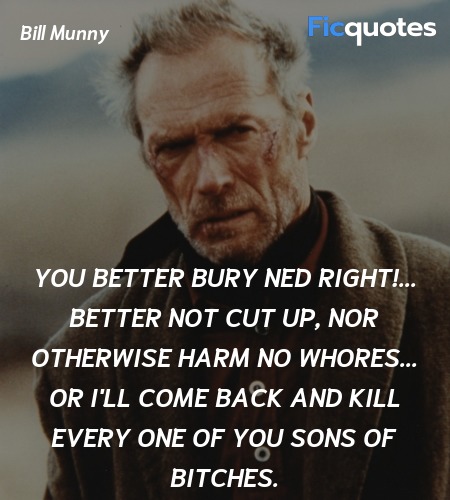 You better bury Ned right!... Better not cut up, nor otherwise harm no whores... or I'll come back and kill every one of you sons of bitches. 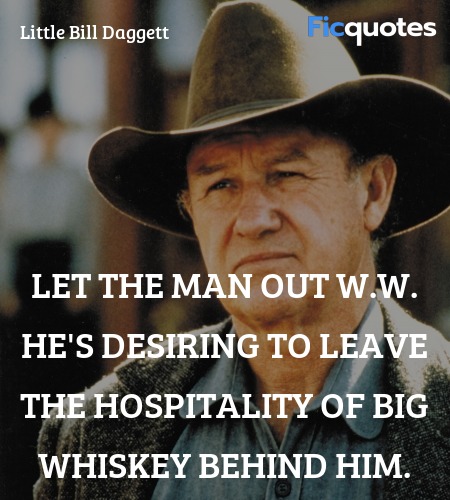 Let the man out W.W. He's desiring to leave the hospitality of Big Whiskey behind him. 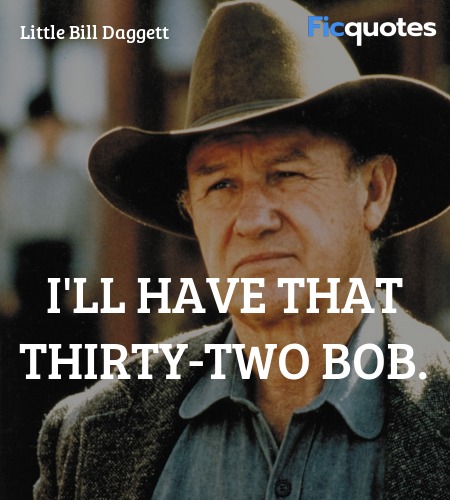 I'll have that thirty-two Bob.

I guess you think I'm kicking you Bob!

Now Ned, them whores are going to tell different lies than you. And when their lies ain't the same as your lies... Well, I ain't gonna hurt no woman. But I'm gonna hurt you. And not gentle like before... but bad.

Strawberry Alice : You just kicked the shit out of an innocent man.
Little Bill Daggett : Innocent? Innocent of what?

It's a hell of a thing, killin' a man. Take away all he's got, and all he's ever gonna have.

Any man don't wanna get killed better clear on out the back.

I've killed women and children. I've killed everything that walks or crawls at one time or another. And I'm here to kill you, Little Bill, for what you done to Ned.

All right, I'm coming out. Any man I see out there, I'm gonna shoot him. Any sumbitch takes a shot at me, I'm not only gonna kill him, but I'm gonna kill his wife, all his friends, and burn his damn house down.

Here, take this money and give my half and Ned's half to my kids. Tell 'em if I ain't back in a week, they give half to Sally Two-Trees. You keep the rest, you can get them spectacles now.

What I said the other day, you looking like me, that ain't true. You ain't ugly like me, it's just that we both have got scars.

Yeah, well, a lotta folks did call him "Two Gun," but that wasn't because he was sportin' two pistols. No, it was because he had a dick that was so big, it was longer than the barrel on that Walther Colt that he carried. And the only insultin' he ever did was to stick that thing of his into this French lady that English Bob here was kinda sweet on.

Now all you gotta do is pull the trigger mister.

Will Munny : Hey, Kid!
Ned Logan : KID? Is that Kid shooting at us?

Ned Logan : I sure do miss my bed.
Will Munny : You said that last night.
Ned Logan : No, last night I said I missed my wife, tonight I just miss my dadgum bed.