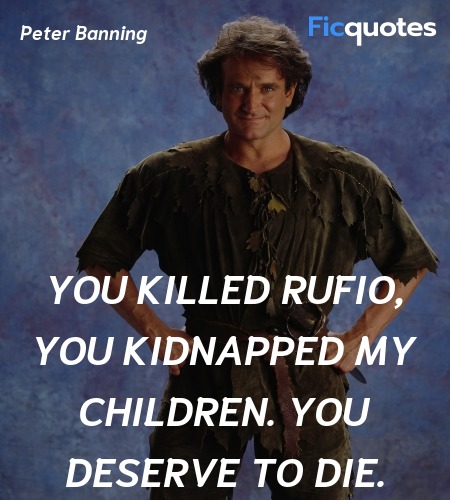 You killed Rufio, you kidnapped my children. You deserve to die.

Is it you? My great and worthy opponent? But it can't be. Not this pitiful, spineless, pasty, bloated codfish I see before me. You're not even a shadow of Peter Pan. 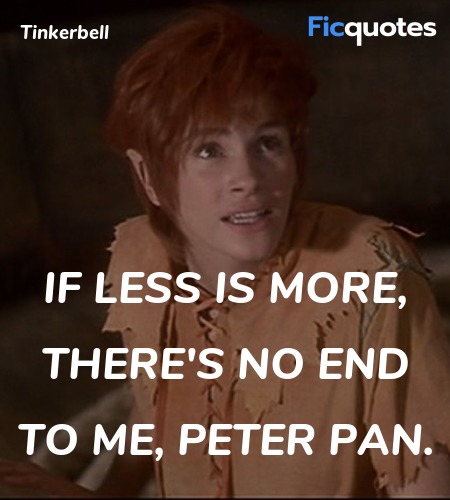 If less is more, there's no end to me, Peter Pan. 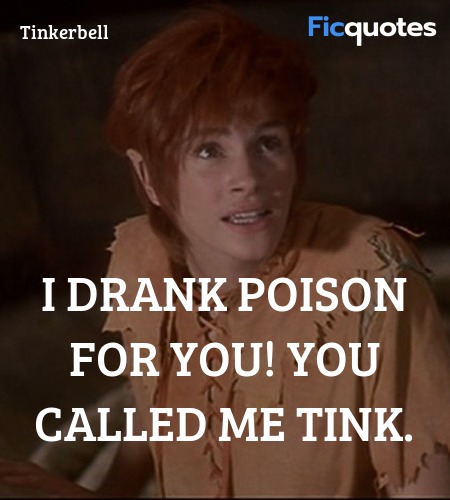 I drank poison for you! You called me Tink. 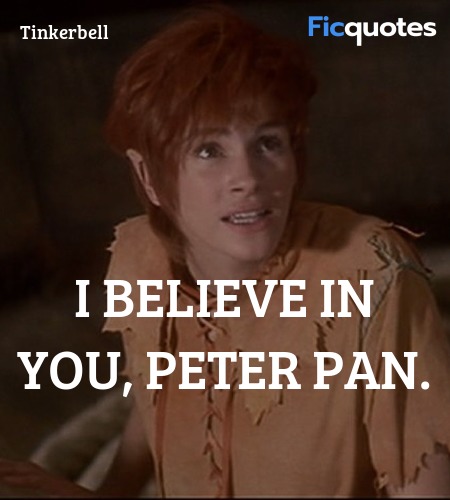 I believe in you, Peter Pan.

Don't mess with me man, I'm a lawyer!

Are you related to Mighty Mouse?

Thank you for believing.

Are you ready for me Peter? Come on, humor the Hook.

What would the world be like without Captain Hook?

You know you're not really Peter Pan, don't you? This is only a dream. When you wake up, you'll just be Peter Banning - a cold, selfish man who drinks too much, is obsessed with success, and runs and hides from his wife and children!

Granny Wendy : So... your adventures are over.
Peter Banning : Oh, no. To live... to live would be an awfully big adventure.

Peter Banning : Wow. Brad, hi! You been holding this long? Uh huh. I'm incredible. Yeah, Neverland. Uh-huh. Lost Boys. Jim Hook, duel to the death. I'll fill you in later. Listen, I'd love to chat, but I gotta climb a drain pipe right now. Why? Because I ran out of fairy dust, if not I would've flown up.
Peter Banning : Why?

Wendy Darling : Boy, why are you crying?
Peter Banning : I don't know. A tear for every happy thought.

Gentlemen, I'm afraid I have decided to cancel the war. Kill them. Kill them all.

Captain James Hook : Hear me, men. For reasons of good form, I have decided that the so-called Pan will return in three days to commit the arbitrament of the sword. Smee, translate.
Smee : In three days, we're gonna have a war! A battle between good and evil to the death!

You are a very ill-mannered young man. Do you know that?

We hope you enjoyed reading Hook quotes. Browse other movie quotes on Ficquotes also. If you think we missed any quote from Hook , please send it to us so we can expand our collection of the best Hook quotes.