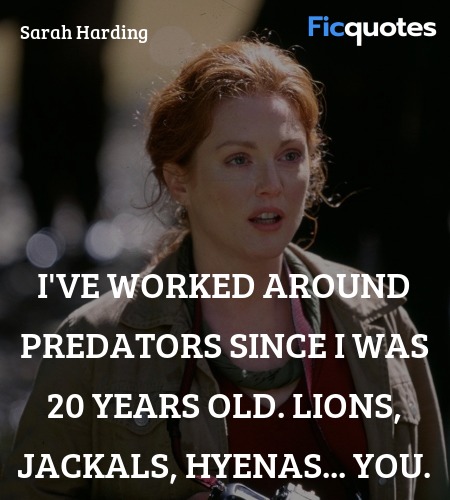 I've worked around predators since I was 20 years old. Lions, jackals, hyenas... you. 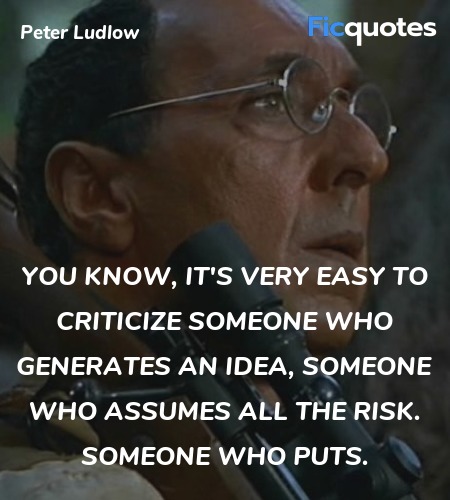 You know, it's very easy to criticize someone who generates an idea, someone who assumes all the risk. Someone who puts. 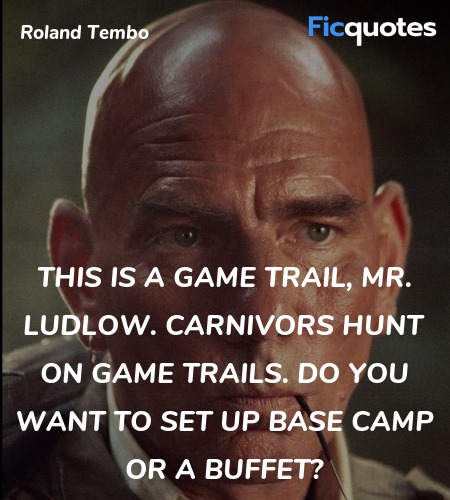 This is a game trail, Mr. Ludlow. Carnivors hunt on game trails. Do you want to set up base camp or a buffet? 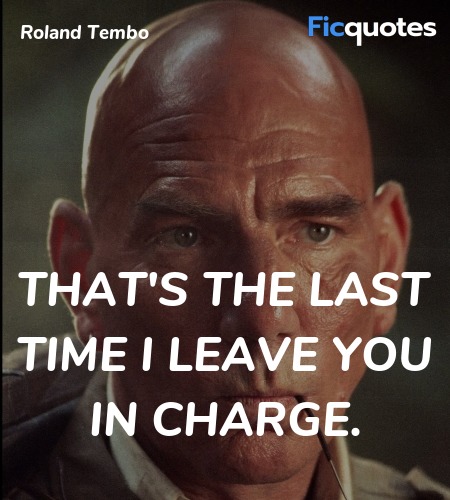 That's the last time I leave you in charge.

The school cut you from the team?

Hang on, this is gonna be bad.

Careful. This suit cost more than your education.

Peter Ludlow : Where's the crew?
InGen Worker : All over the place.

So you went from capitalist to naturalist in just 4 years. That's something.

It's fine if you wanna put your name on something but STOP putting it on other people's headstones.

InGen Worker : You okay, Mr. Ludlow?
Peter Ludlow : I don't know, how do I look?

It is absolutely imperative that we work with the Costa Rican Department of Biological Preserves to establish a set of rules for the preservation and isolation of that island. These creatures require our absence to survive, not our help. And if we could only step aside and trust in nature, life will find a way.

Roland Tembo : I'm sorry, Ajay, you were saying?
Ajay Sidhu : You broke that man's jaw for no other reason than your own boredom. Tell me the truth, Roland, are you not even interested in this expedition's quarry?
Roland Tembo : Ajay, go up to my ranch, take a look around the trophy room, and tell me what kind of quarry you think could possibly be of any interest to me?

Roland Tembo : Dieter, get in the outrigger. You're closing in on a parasauro...
Dieter Say that again, Roland. A what?
Roland Tembo : The one with the big red horn! The pompadour! Elvis!

Nick Van Owen : You seem like you have a shred of common sense, what the hell are you doing here?
Roland Tembo : Somewhere on this island is the greatest predator there ever lived. The second greatest predator must take him down.
Nick Van Owen : You gonna use that?
Roland Tembo : If he doesn't surrender, yes.
Nick Van Owen : The animal exists on the planet for the first time in tens of millions of years and the only way you can express yourself is to kill it.
Roland Tembo : Remember that chap about twenty years ago? I forget his name. Climbed Everest without any oxygen, came down nearly dead. When they asked him, they said why did you go up there to die? He said I didn't, I went up there to live.

Peter, if you want me to run your little camping trip, there are two conditions: firstly, I'm in charge, and when I'm not around, Dieter is. All you need to do is sign the checks, tell us we're doing a good job, and open your case of Scotch when we have a good day. Second condition: my fee? You can keep it. All I want in exchange for my services is the right to hunt one of the tyrannosaurs. A male, a buck only. How and why are my business. Now if you don't like either of those two conditions, you're on your own. So go ahead, set up base camp right here, or in a swamp, or in the middle of a Rex nest for all I care. But I've been on too many safaris with rich dentists to listen to any more suicidal ideas, OK?

The queen, the goddess, my inspiration.

OK, so there is another island of dinosaurs, no fences this time and you wanna send people in, very few people, on the ground? Right?

Dr. Ian Malcolm : Eddie, is there any reason to think that the radio in the trailer might work?
Eddie Carr : If you feel at all qualified, try turning the switch to "on."

Hey, you want some good parental advice? Don't listen to me.

Kelly Malcolm : She doesn't even have Sega. She's such a troglodyte.
Dr. Ian Malcolm : Cruel, but good word use.

Eddie Carr : It keeps you out of harm's way, away from the animals.
Dr. Ian Malcolm : Actually, it would put them at very convenient biting height.

Oh, they get very angry when you run out of film.

What are you talking about? Five years of work and a hundred miles of electrified fence couldn't prepare the other island. And you think that, what? A couple dozen Marlboro men were going to make a difference here?