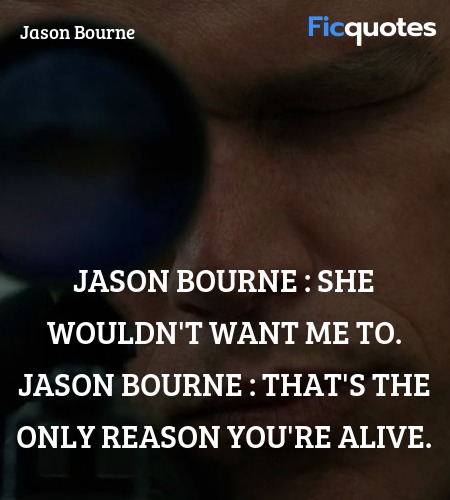 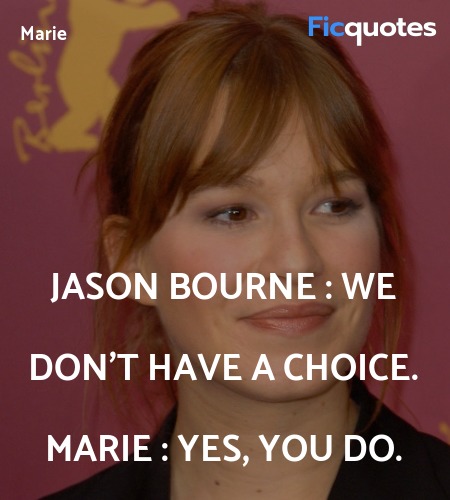 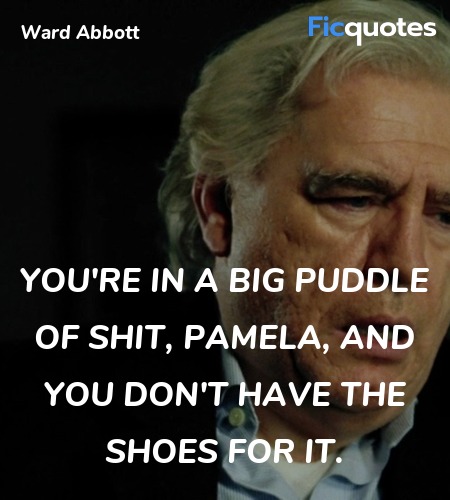 You're in a big puddle of shit, Pamela, and you don't have the shoes for it.

Pamela Landy : What if I can't find her?
Jason Bourne : It's easy. She's standing right next to you.

Jarda : Word in the ether was you'd lost your memory.
Jason Bourne : You still should have moved.

Ward Abbott : So, what are we looking at?
Pamela Landy : I want to know about it.
Ward Abbott : Know about it? It was a kill squad. Black on black. We closed it down two years ago. Nobody wants to know about Treadstone. Not around here. So I think you better take this back to Marty and let him know exactly what you're doing.
Pamela Landy : He does. I've been down to the archives. I've have the files Ward. Let's talk about Conklin.
Ward Abbott : What are you after Pam? You want to fry me? You want my desk. Is that it?
Pamela Landy : I want to know what happened.
Ward Abbott : What happened? Jason Bourne happened. You got the files. Then let's cut the crap. Conklin had these guys wound so tight they were bound to snap. Bourne was his number one. The guy went for a job, screwed the op, never came back. Conklin couldn't fix it, couldn't find Bourne, couldn't adjust. It all went sideways.
Pamela Landy : So you had Conklin killed. I mean if we're cutting the crap.
Ward Abbott : I've given 30 years and 2 marriages to this agency. I've shoveled shit on 4 continents. I'm due to retire next year. But if you think I'm going to sit here and let you dangle me with this, you can go to hell. And Marshall too. It had to be done.

Pamela Landy : What?
Ward Abbott : I know how you're feeling. You lost two men in Berlin and you want it to mean something, but nothing Bourne gives you will bring your men back. Nothing in those files makes their sacrifice worthwile. You have to let go. We're professionals, when an operation goes bad, we tie it off.
Pamela Landy : If there's something you're not telling me I want it now before I send that girl out there, do you understand?
Ward Abbott : You talk about this stuff like you read it in a book.

Tom Cronin : He's making his first mistake.
Nicky : It's not a mistake. They don't make mistakes. They don't do random. There's always an objective. Always a target.
Pamela Landy : The objectives and targets always came from us. Who's giving them to him now?
Nicky : Scary version? He is.