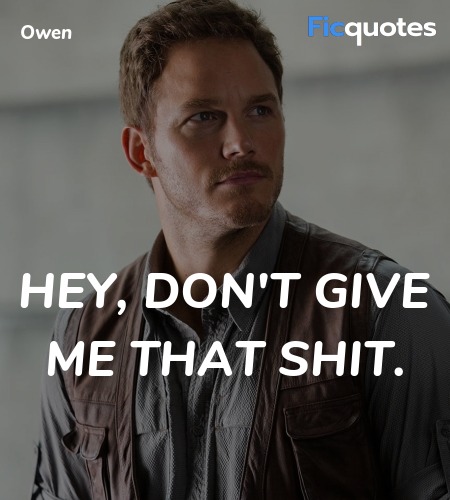 Hey, don't give me that shit. 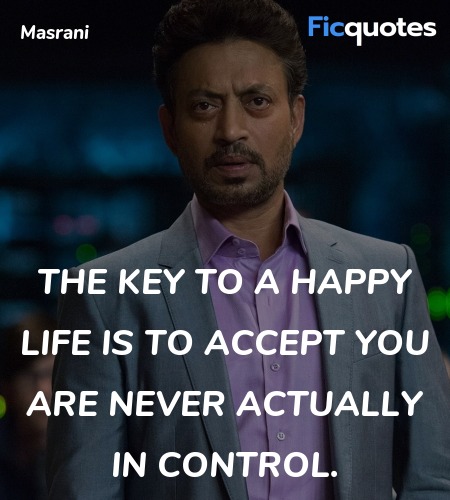 The key to a happy life is to accept you are never actually in control. 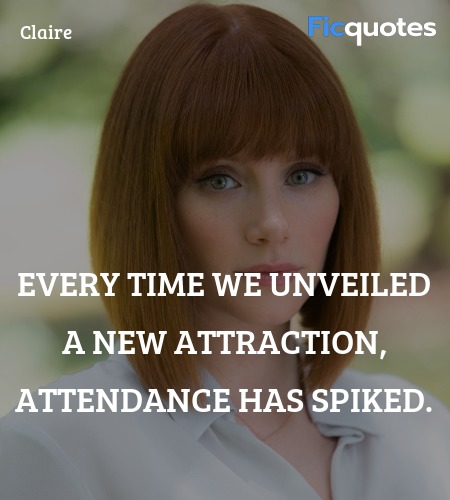 Every time we unveiled a new attraction, attendance has spiked. 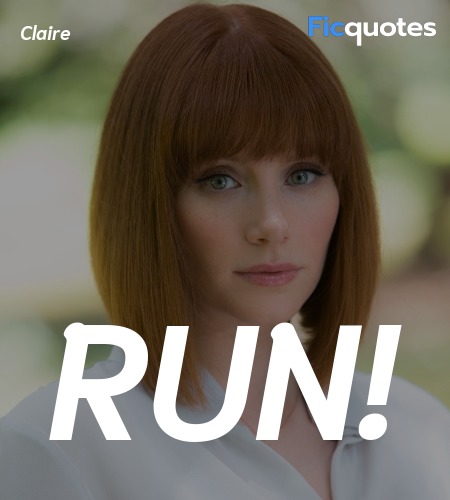 That thing out there... That is no dinosaur.

It didn't eat them. It's killing for sport.

You can't ever tell your mother about this!

We have an asset out of containment. Put ACU on alert. This not a drill.

Don't worry. It's gonna be just like taking a walk in the woods... 65 million years ago.

Watch your six! Raptors got a new alpha!

Gray : No, no, bad idea.
Zach : No, it's a great idea.
Gray : No, it's a bad idea. We're gonna get arrested, they're gonna shave our heads. and we're going to have to make root beer in the toilet.
Zach : What are you talking about?

Gray : If mom and dad get divorced, will one of us be with mom and the other with dad?
Zach : What? Why would you say that?
Gray : Because they are.
Zach : No, they're not getting divor... they're not getting divorced! Look, you haven't been around long enough; they've always been that way.
Gray : They get mail from two different lawyers.
Zach : That doesn't mean anything.
Gray : I Googled it. They're divorce lawyers.

We are safe in here right?

I can't wait to tell my mom about this!

Barry : What do you think? Want to take one home?
Hoskins : Hey, don't joke. When I was your age I rescued a wolf pup. It was like two months old. Could barely walk. Used to sleep by my bed. Watch over me. My wife, she came at me with a steak knife. He took a chunk out of her arm.
Barry : You put him down?
Hoskins : Hell no.

Remember why this place was made, Claire. Jurassic World exists to show us how very small we are. Very new. You can't put a price on that.

Masrani : I never asked for a monster!
Henry Wu : Monster is a relative term. To a canary, a cat is a monster. We're just used to being the cat.

The park needs a new attraction every few years in order to reinvigorate the public's interest. Kind of like the space program.

Claire : Why are the west plains closed?
Vivian : Another Pachy roaming outside his zone. But he's fully sedated and ready for relocation.

Vivian : Did you close the deal?
Claire : Looks like it. Verizon Wireless presents the Indominus Rex.
Lowery : Ugh, that is so terrible. Why not just go the distance, Claire, and just let these corporations name the dinosaurs? They got all the ball parks. Why stop there?

You might have made them in a test tube, buy they don't know that. These animals are thinking, "I gotta eat. I gotta hunt. I gotta..." You can relate to at least one of those things. Right?

Claire : And please, clean your workplace. It's... chaotic.
Lowery : I like to see it as living system... Just enough stability to keep it from falling into total anarchy.

YOU created a genetically modified hybrid, RAISED it in captivity; She is seeing all of this for the first time, she doesn't even know WHAT she is! She Will Kill ANYTHING that moves!