Did you have a nightmare? I have nightmares, too. Someday I'll explain it to you, why they came, why they won't ever go away, but I'll tell you how I survive it. I make a list in my head... of all the good things I've seen someone do. Every little thing I can remember. It's like a game. I do it over and over. Gets a little tedious after all these years, but... there are much worse games to play. 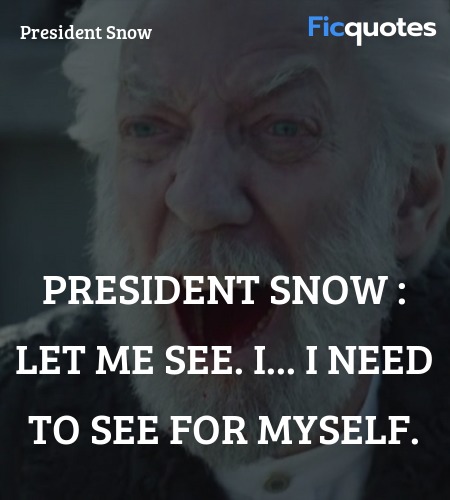 Gale Hawthorne : So now that we're dead, what're we gonna do?
Peeta Mellark : Isn't it obvious? The next move is to kill me. 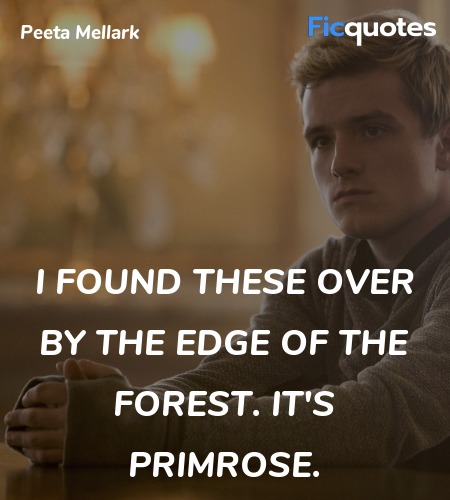 I found these over by the edge of the forest. It's primrose. 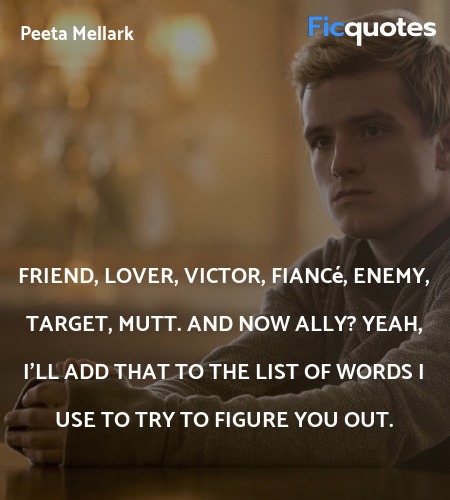 Friend, lover, Victor, fiancé, enemy, target, mutt. And now ally? Yeah, I'll add that to the list of words I use to try to figure you out. 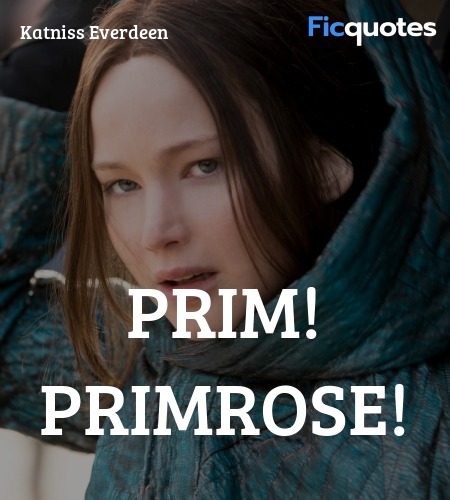 I wish he'd hurry up with that last part.

We can take down the Capitol.

President Snow : It's her. It is her. The arena has moved underground.

Gale Hawthorne : What's the difference, Katniss? Crushing the enemy in a mine or blowin' them outta of the sky with one of Beetee's arrows. It's the same thing.
Katniss Everdeen : We were under attack in District 8. And that hovercraft wasn't filled with civilians.
Gale Hawthorne : Doesn't matter. Even if those civilians are just moppin' floors, they're helping the enemy. And if they have to die, I can live with that. No one who supports the Capitol is innocent.
Katniss Everdeen : With that kind of thinking, you can kill whoever you want. You can send kids off to the Hunger Games to keep the districts in line.
Gale Hawthorne : It's war, Katniss. Sometimes killing isn't personal. Figured if anyone knew that, it was you.
Katniss Everdeen : I, of all people, know that it's always personal.

Katniss Everdeen : I'm going to kill Snow. Nothing good is safe while he's alive. And I can't make another speech about it. No more cameras. No more propos. No more Games. He needs to see my eyes when I kill him.
Johanna Mason : Now you're talking.

Johanna Mason : Well, there she is. The Mockingjay. Oh, that speech you gave. Oh, man, feel. I mean, still have goosebumps.
Johanna Mason : You don't mind, do you? They cut off my supply of morphling. There's this head doctor that comes in and sees me every day, trying to help me adjust to reality. Like some guy from this rabbit's warren actually knows anything about my reality. At least twenty times in a session, he tells me that I'm totally safe. Safe from the Capitol. Safe from Snow. What about you, Mockingjay? You feeling totally safe?
Katniss Everdeen : 'Till I got shot.
Johanna Mason : Oh, please. The bullet didn't even touch you. Cinna saw to that. Of course your costume would be bulletproof. So, what are your injuries?
Katniss Everdeen : Bruised ribs, bruised lung.
Johanna Mason : I'm surprised they haven't found you a new lung. I mean, I've got two. Do you want one of mine? I mean, it's everybody's job to keep you alive.
Katniss Everdeen : Is that why you hate me?
Johanna Mason : Partly. You're also a little hard to swallow. The whole tacky romance drama and the "defender of the hopeless" act. Even though it's not an act, which makes it even more unbearable. Feel free to take any of this personally.

Gale Hawthorne : So now that we're dead, what're we gonna do?
Peeta Mellark : Isn't it obvious? The next move is to kill me.

President Snow : Antonius, with our best troops crushed in the mountains and the rebels marching on us as we speak, what did we celebrate?
Antonius : The death of the Mockingjay, sir. If Peeta didn't kill her, her own arrogance did.
President Snow : Of course. That's the same facile thinking that led you to divert our best Peacekeepers into District 2. You have a habit of burying people before they're dead. If the Mockingjay were gone, the rebels would already be using her as a martyr. No, Minister Antonius, I'm afraid that is not what we were toasting at all.

President Snow : The rebels will reach the outskirts of the Capitol in a matter of days. We'll evacuate the outer blocks to let them in. I want all anti-aircraft defenses ready, so we're secure from the skies. Lure them into the city, and then our Gamemakers will make them pay for every inch with blood. I want every camera watching. We'll turn their advance into a celebration of suffering. Let each moment be captured for all posterity.
President Snow : So, what did we toast tonight, Minister Antonius? We toasted a glorious era coming to its bitter end.

Egeria : They survived. I don't know how. We picked them up on a surveillance cam.

What do all those deaths mean? They mean that our lives were never ours. There was no real life because we didn't have any choice. Our lives belong to Snow and our deaths do, too. But if you kill him, Katniss, if you end all of this, all those deaths - they mean something.