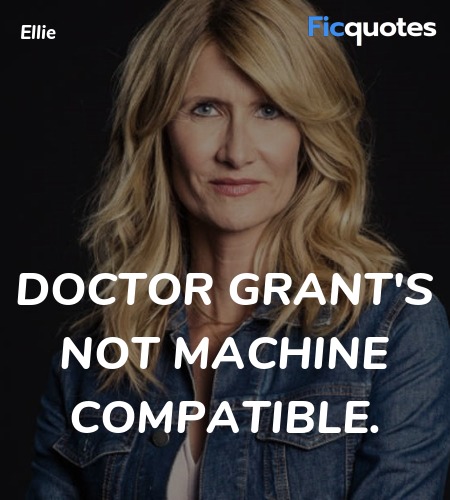 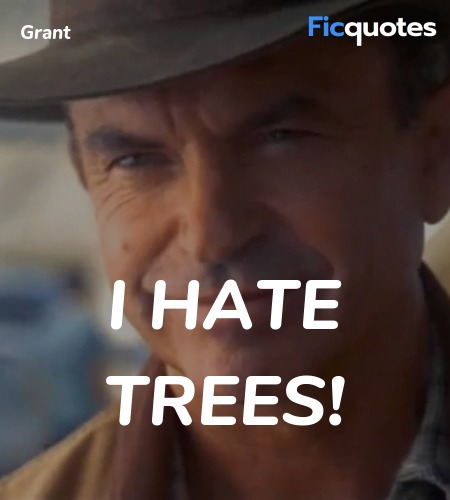 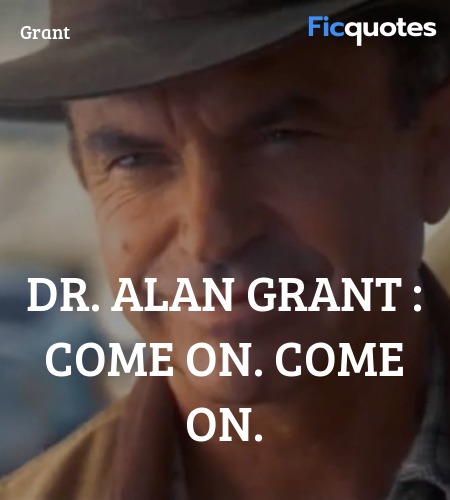 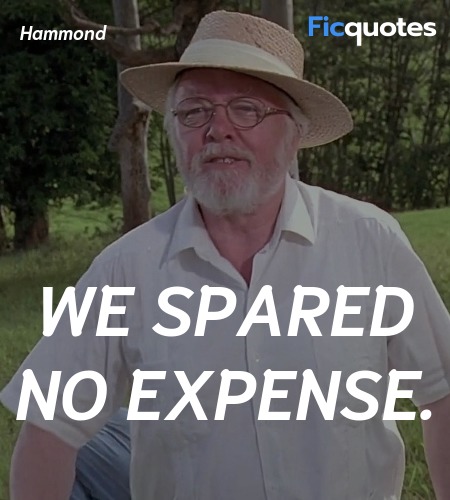 We spared no expense.

You'll have to get used to Dr. Malcolm, he suffers from a deplorable excess of personality, especially for a mathematician.

I bring the scientists, you bring a rock star.

That is one big pile of shit.

You did it. You crazy son of a bitch, you did it.

God help us, we're in the hands of engineers.

Mr. Hammond, I think we're back in business!

Hey, Alan. If you wanted to scare the kid you could have pulled a gun on him.

They're moving in herds. They do move in herds.

The shut down must've turned off all the fences. Damn it, even Nedry knew better than to mess with the raptor fences.

Muldoon : Quiet, all of you!
Muldoon : They're approaching the Tyrannosaur paddock.

Dr. Alan Grant : Hammond, after careful consideration, I've decided, not to endorse your park.
John Hammond : So have I.

They should all be destroyed.

Donald Gennaro : Let's get something straight, John, this is not a weekend excursion, this is a serious investigation of the stability of the island. Your investors, whom I represent, are deeply concerned. And 48 hours from now, if they're not convinced, I'm not convinced. I'll shut you down, John.
John Hammond : In 48 hours, I'll be accepting your apologies.

You know the first attraction I ever built when I came down south from Scotland? It was a Flea Circus, Petticoat Lane. Really quite wonderful. We had a wee trapeze, and a merry-go... carousel and a seesaw. They all moved, motorized of course, but people would say they could see the fleas. "Oh, I see the fleas, mummy! Can't you see the fleas?" Clown fleas and high wire fleas and fleas on parade... But with this place, I wanted to show them something that wasn't an illusion. Something that was real, something that they could see and touch. An aim not devoid of merit.

Donald Gennaro : Are these characters... auto-erotica?
John Hammond : No, no, no. We have no animatronics here. These are the real miracle workers of Jurassic Park.

I told you! How many times? We needed locking mechanisms on the vehicle doors!

Why didn't I build it in Orlando?

They'll be fine. Who better to get the children through Jurassic Park than a dinosaur expert?

Donald Gennaro : And we can charge anything we want, 2,000 a day, 10,000 a day, and people will pay it. And then there's the merchandise...
John Hammond : Donald, Donald... This park was not built to cater only for the super-rich. Everyone in the world has the right to enjoy these animals.
Donald Gennaro : Sure, they will. Well, we'll have a, a coupon day or something.

We've made living biological attractions so astounding that they'll capture the imagination of the entire planet.

John Hammond : So much for our first tour: two no-shows and one sick Triceratops.
Ray Arnold : It could have been worse, John. A lot worse.

Donald Gennaro : This is overwhelming, John. Are these characters auto-erotica?
John Hammond : No, no, no, we have no animatronics here. Those people are the real miracle workers of Jurassic Park.

The most advanced amusement park in the entire world. And I'm not just talking about rides, you know? Everybody has rides. No, we have made living biological attractions so astounding, that they'll capture the imaginations of the entire planet.

Volunteer Boy : That doesn't look very scary. More like a six-foot turkey.
Dr. Alan Grant : A turkey, huh? OK, try to imagine yourself in the Cretaceous Period. You get your first look at this "six foot turkey" as you enter a clearing. He moves like a bird, lightly, bobbing his head. And you keep still because you think that maybe his visual acuity is based on movement like T-Rex - he'll lose you if you don't move. But no, not Velociraptor. You stare at him, and he just stares right back. And that's when the attack comes. Not from the front, but from the side,
Dr. Alan Grant : from the other two raptors you didn't even know were there. Because Velociraptor's a pack hunter, you see, he uses coordinated attack patterns and he is out in force today. And he slashes at you with this...
Dr. Alan Grant : A six-inch retractable claw, like a razor, on the the middle toe. He doesn't bother to bite your jugular like a lion, say... no no. He slashes at you here, or here...
Dr. Ellie Sattler : Oh, Alan...
Dr. Alan Grant : Or maybe across the belly, spilling your intestines. The point is, you are alive when they start to eat you. So you know, try to show a little respect.
Volunteer Boy : OK.

Ellie, this one was always my favorite when I was a kid. And now I've seen one, its the most beautiful thing I ever saw.

Dr. Alan Grant : What kind of park is this?
John Hammond : It's right up your alley.

Keep absolutely still. Its vision is based on movement.

You will remember to wash your hands before you eat anything?

John Hammond : When we have control again...
Dr. Ellie Sattler : You never had control, that's the illusion! I was overwhelmed by the power of this place. But I made a mistake, too, I didn't have enough respect for that power and it's out now. The only thing that matters now are the people we love. Alan and Lex and Tim. John, they're out there where people are dying.

John Hammond : All major theme parks have delays. When they opened Disneyland in 1956, nothing worked!
Dr. Ian Malcolm : Yeah, but, John, if The Pirates of the Caribbean breaks down, the pirates don't eat the tourists.

What have they got in there, King Kong?

do I hate being right all the time!

You think they'll have that on the tour?

Remind me to thank John for a lovely weekend.

You see a Tyrannosaur doesn't follow a set pattern or park schedules, the essence of chaos.