Planet of the Apes Quotes

Planet of the Apes

Planet of the Apes Quotes

Beware the beast Man, for he is the Devil's pawn. Alone among God's primates, he kills for sport or lust or greed. Yea, he will murder his brother to possess his brother's land. Let him not breed in great numbers, for he will make a desert of his home and yours. Shun him; drive him back into his jungle lair, for he is the harbinger of death. 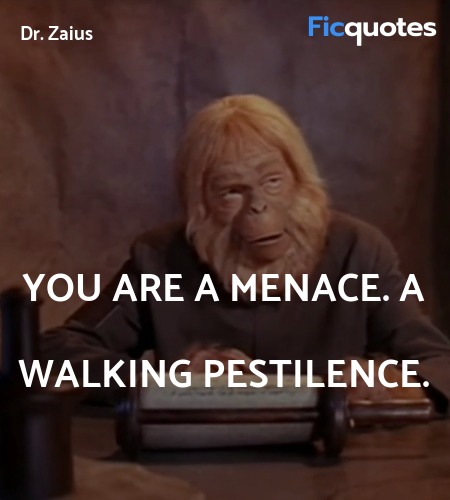 You are a menace. A walking pestilence. 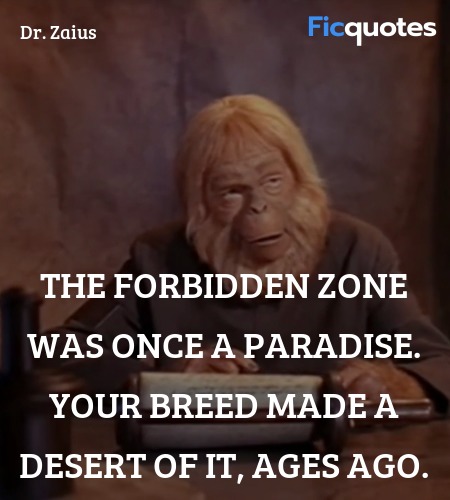 The Forbidden Zone was once a paradise. Your breed made a desert of it, ages ago. 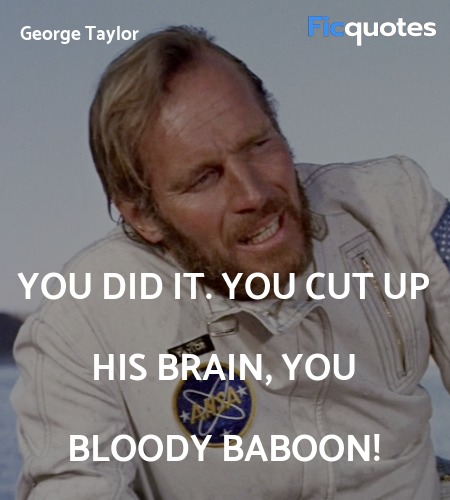 You did it. You cut up his brain, you bloody baboon! 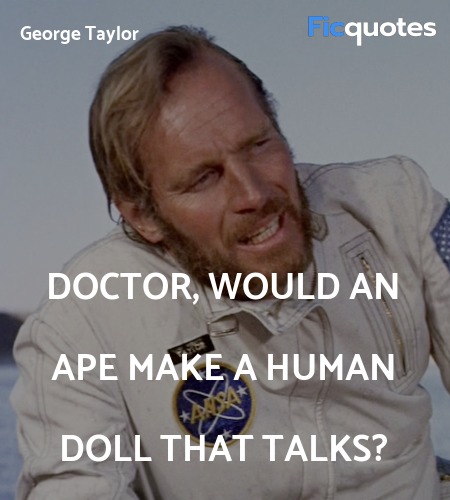 Doctor, would an ape make a human doll that TALKS?

Dr. Zira : What will he find out there, doctor?
Dr. Zaius : His destiny.

Remember, never trust anybody over 30.

What evidence? There were no weapons in that cave.

Have you forgotten your scripture, the thirteenth scroll? "And Proteus brought the upright beast into the garden and chained him to a tree and the children did make sport of him."

Ah, yes - the young ape with a shovel. I hear you're planning another archeological expedition. Cornelius, a friendly word of warning - as you dig for artifacts, be sure you don't bury your reputation.

Dr. Zira, I must caution you. Experimental brain surgery on these creatures is one thing, and I'm all in favor of it. But your behavior studies are another matter. To suggest that we can learn anything about the simian nature from a study of man is sheer nonsense. Why, man is a nuisance. He eats up his food supply in the forest, then migrates to our green belts and ravages our crops. The sooner he is exterminated, the better. It's a question of simian survival.

You are right, I have always known about man. From the evidence, I believe his wisdom must walk hand and hand with his idiocy. His emotions must rule his brain. He must be a warlike creature who gives battle to everything around him, even himself.

Well, at least they haven't tried to bite us.

Chalk up another victory to the human spirit

George Taylor : Oh my God. I'm back. I'm home. All the time, it was... We finally really did it
George Taylor : You Maniacs! You blew it up! Ah, damn you! God damn you all to hell!

Landon : You don't seem too cut up about it...
George Taylor : It's too late for a wake. She's been dead nearly a year.

Lucius : Why did you do that? Scrape off your hair?
George Taylor : In my world, when I left it, only kids your age wore beards.

Imagine me needing someone. Back on Earth I never did. Oh, there were women. Lots of women. Lots of love-making but no love. You see, that was the kind of world we'd made. So I left, because there was no one to hold me there.

Honorious : Tell us, why are all apes created equal?
George Taylor : Some apes, it seems, are more equal than others.

I'm a seeker too. But my dreams aren't like yours. I can't help thinking that somewhere in the universe there has to be something better than man. Has to be.

And that completes my final report until we reach touchdown. We're now on full automatic, in the hands of the computers. I have tucked my crew in for the long sleep and I'll be joining them soon. In less than an hour, we'll finish our sixth month out of Cape Kennedy. Six months in deep space - by our time, that is. According to Dr. Haslein's theory of time, in a vehicle travelling nearly the speed of light, the Earth has aged nearly 700 years since we left it, while we've aged hardly at all. Maybe so. This much is probably true - the men who sent us on this journey are long since dead and gone. You who are reading me now are a different breed - I hope a better one. I leave the 20th century with no regrets. But one more thing - if anybody's listening, that is. Nothing scientific. It's purely personal. But seen from out here everything seems different. Time bends. Space is boundless. It squashes a man's ego. I feel lonely. That's about it. Tell me, though. Does man, that marvel of the universe, that glorious paradox who sent me to the stars, still make war against his brother? Keep his neighbor's children starving?

Take your stinking paws off me, you damned dirty ape!