You're not the only one with a gun, bitch. 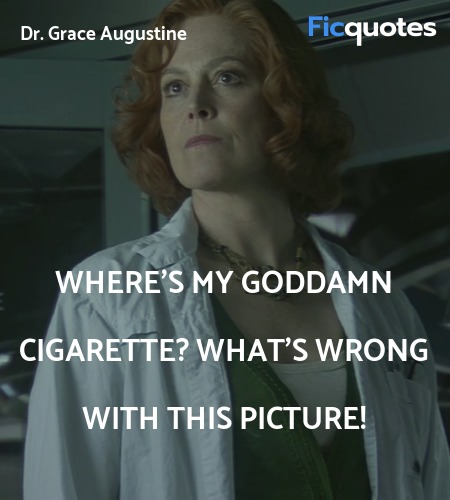 Where's my goddamn cigarette? What's wrong with this picture! 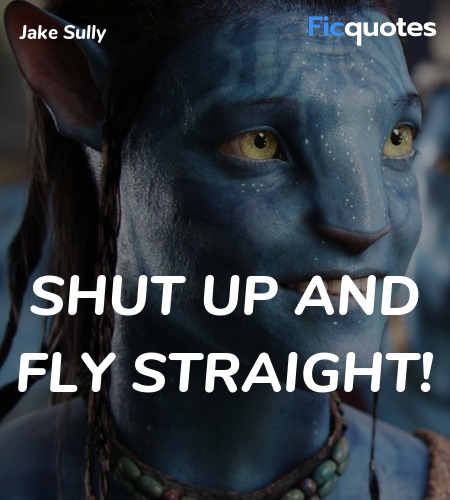 Shut up and fly straight! 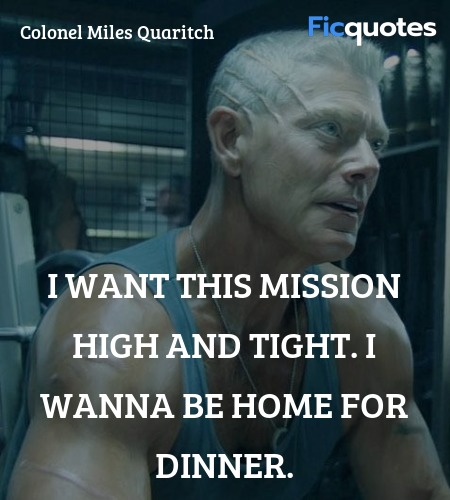 I want this mission high and tight. I wanna be home for dinner.

Sky People cannot learn, they do not see. 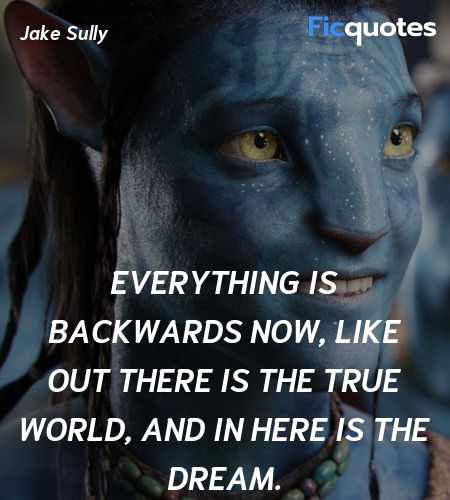 Everything is backwards now, like out there is the true world, and in here is the dream.

I need to get some samples.

Don't make me force-feed a cripple!

That is one big damn tree!

And that's how you scatter the roaches.

You should see your faces!

I was hoping for some kind of tactical plan that didn't involve martyrdom.

I may not be much of a horse guy, but I was born to do this.

The way I had it figured, Toruk's the baddest cat in the sky. Nothing attacks him. So why would he ever look up? That was just a theory.

Sometimes your whole life boils down to one insane move.

They didn't even have a word for 'lie'.

Hey Sully... how does it feel to betray your own race? You think you're one of them? Time to wake up!

I became a Marine for the hardship. Told myself that I can pass any test a man can pass. All I ever wanted was a single thing worth fighting for.

Why should they help us?

You are not in Kansas anymore. You are on Pandora, ladies and gentlemen. Respect that fact every second of every day. If there is a Hell, you might wanna go there for some R & R after a tour on Pandora. Out there beyond that fence every living thing that crawls, flies, or squats in the mud wants to kill you and eat your eyes for jujubes. We have an indigenous population of humanoids called the Na'vi. They're fond of arrows dipped in a neurotoxin that will stop your heart in one minute - and they have bones reinforced with naturally occurring carbon fiber. They are very hard to kill. As head of security, it is my job to keep you alive. I will not succeed. Not with all of you. If you wish to survive, you need to cultivate a strong, mental aptitude. You got to obey the rules: Pandora rules. Rule number one...

A recon gyrene in an Avatar body... that's a potent mix! Gives me the goosebumps!

Everyone on this base, every one of you, is fighting for survival, and that's a fact. There's an aboriginal horde out there massing for an attack. These orbital images tell me that the hostile numbers have gone from a few hundred, to well over two thousand in one day. And more are pourin' in. In a week's time there could be 20,000 of 'em. At that point they will overrun our perimeter. That's not gonna happen. Our only security lies in preemptive attack. We will fight terror with terror. The hostiles believe that this mountain territory is protected by their... deity. And when we destroy it, we will blast a crater in their racial memory so deep, that they won't come within 1,000 klicks of this place ever again. And that, too, is a fact.

She said all energy is only borrowed, and one day you have to give it back.

Jake Sully : I see you, Brother... thank you.
Jake Sully : Your spirit will now be with Eywa, but your body will remain for The People.

Jake Sully : Tsu'tey, son of Ateyo, I stand before you ready to serve the Omaticya people. You are Olo'eyctan, and you are a great warrior. I can't do this without you.
Tsu'tey : Toruk Macto, I will fly with you.

Look, Sully, I want you to learn this savages from the inside, I want you to gain their trust. I need to know how to force their cooperation or hammer them hard if they won't.

There's no such thing as an ex-marine. You may be out, but you never lose the attitude.

This is how it's done. When people are sittin' on shit that you want, you make 'em your enemy. Then you're justified in taking it.

Well, uh, I guess this is my last video log. Whatever happens tonight, either way, I'm not gonna be comin' back to this place. Well, I guess I better go. I don't wanna be late for my own party. It's my birthday, after all. This is Jake Sully signin' off.

Outcast. Betrayer. Alien. I was in the place the eye does not see. I needed their help. And they needed mine. But to ever face them again, I was gonna have to take it to a whole new level.

Moat : It is hard to fill a cup that is already full.
Jake Sully : My cup is empty. Trust me. Just ask Dr. Augustine. I'm no scientist.
Moat : Then what are you?
Jake Sully : I was a marine. A warrior... of the uh... Jarhead Clan.

Jake Sully : With your permission, I will speak now. You would honor me by translating.
Jake Sully : The Sky People have sent us a message... that they can take whatever they want. That no one can stop them. Well, we will send them a message. You ride out as fast as the wind can carry you. You tell the other clans to come. Tell them Toruk Macto calls to them! You fly now, with me! My brothers! Sisters! And we will show the Sky People... that they cannot take whatever they want! And that this... this is our land!

Who's got a date with the chief's daughter?

When I was lying in the V.A. hospital with a big hole blown through the middle of my life, I started having these dreams of flying. I was free. But sooner or later, you always have to wake up.

Up ahead was Pandora. You grew up hearing about it, but I never figured I'd be goin' there.

Learning to ride an ikran - we call 'em banshees - is a test every young hunter has to pass. But to do that, you gotta go where the banshees are. Boo-rah.

You want a fair deal? You're on the wrong planet. The strong prey on the weak, it's just the way things are. And nobody does a damned thing.

The aliens went back to their dying home. Only a few were chosen to stay.

I was a stone cold aerial hunter, death from above. Only problem is, you're not the only one.

One life ends, another begins

Sooner or later, though, you always have to wake up.

I became a marine for the hardship, to be hammered on the anvil of life. I told myself I can pass any test a man can pass.

All I ever wanted was a single thing worth fighting for.

If it ain't raining, we ain't training.

I was a warrior who dreamed he could bring peace. Sooner or later, though, you always wake up.

Toruk Macto was mighty. He brought the clans together in a time of great sorrow. All Na'vi people know this story.

This is gonna ruin my whole day!