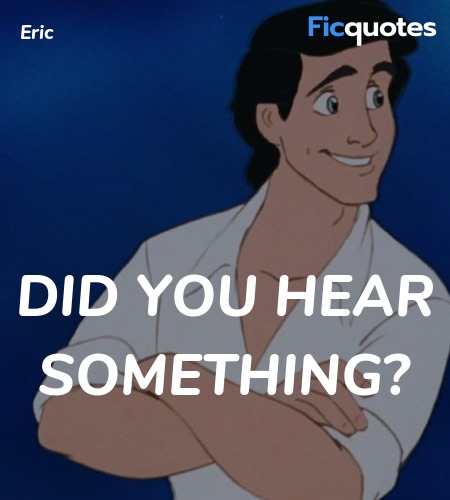 Did you hear something?

Scuttle : Wa wa wa, wa wa!
Prince Eric : Wow. Somebody should find that poor animal and put it out of its misery. 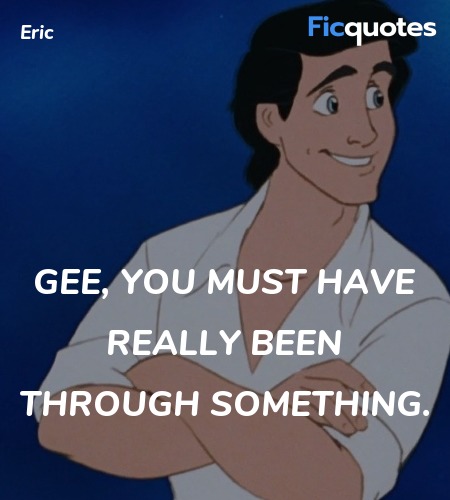 Gee, you must have really been through something.

Ursula : Well, angelfish, the solution to your problem is simple. The only way to get what you want is to become a human yourself.
Ariel : Can you do that?
Ursula : My dear, sweet child. That's what I do. It's what I live for, to help unfortunate merfolk, like yourself, poor souls with no one else to turn to. 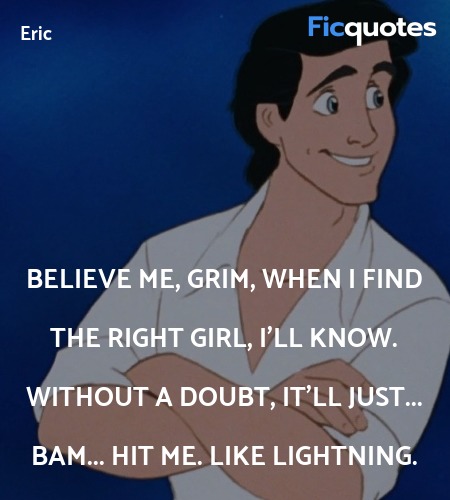 Believe me, Grim, when I find the right girl, I'll know. Without a doubt, it'll just... bam... hit me. Like lightning.

Prince Eric : Well, what do you say? Would you like to join me on a tour of my kingdom tomorrow?
Grimsby : Wonderful! Now, let's eat before this crab wanders off my plate.

Grimsby : Happy Birthday, Eric!
Prince Eric : Uh, gee Grim. It's it's really something!
Grimsby : Yes, I commissioned it myself.

Prince Eric : Isn't this great? The salty sea air, the wind blowing in your face. Aaah, the perfect day to be at sea!
Grimsby : Oh, yes urp delightful.

Triton : I just don't know what we're going to do with you, young lady.
Ariel : Daddy, I'm sorry, I just forgot, I...
Triton : As a result of your careless behavior...
Sebastian : Careless and reckless behavior!
Triton : The entire celebration was, er...
Sebastian : Well, it was ruined! That's all, completely destroyed! This concert was to be the pinnacle of my distinguished career. Now thanks to you, I am the laughingstock of the entire kingdom!
Flounder : But it wasn't her fault! Ah well first, ahh, this shark chased us yeah yeah! And we tried to but we couldn't and then grr and and we whoa! Ah, and then we were safe. But then this seagull came, and it was this is this, and that is that, and.
Triton : Seagull?
Triton : What? Oh you went up to the surface again, didn't you? Didn't you?
Ariel : Nothing happened.
Triton : Ariel, How many times must we go through this? You could've been seen by one of those barbarians by by one of those humans!
Ariel : Daddy, they're not barbarians!
Triton : They're dangerous; do you think I would want to see my youngest daughter snared by some fish eater's hook?
Ariel : I'm sixteen years old. I'm not a child.
Triton : Don't you take that tone of voice with me, young lady. As long as you live under my ocean, you'll obey my rules!
Ariel : But if you would just listen!
Triton : Not another word! And I am never, never to hear of you going to the surface again. Is that clear?

Ariel : If only I could make him understand. I just don't see things the way he does. I just don't see how a world that makes such wonderful things could be bad.
Ariel : Look at this stuff, isn't it neat? / Wouldn't ya think my collection's complete / Wouldn't you think I'm the girl / Girl who has everything / Look at this trove, treasures untold / How many wonders can one cavern hold? / Looking around you'd think / Sure, she's got everything / I've got gadgets and gizmos aplenty / I have whoozits and whatzis galore / You want thingamabobs? I've got twenty / But who cares? No big deal / I want more.

Ariel : But without my voice, how can I.

Ursula : You'll have your looks. Your pretty face and don't underestimate the importance of "body language." Ha!
Ursula : The men up there don't like a lot of blabber / They think a girl who gossips is a bore / Yes, on land it's much prefered / for ladies not to say a word / After all, dear, what is idle prattle for? / Come on, they're not all that impressed with conversation / True gentlemen avoid it when they can / But they dote and swoon and fawn / On a lady who's withdrawn / It's she who holds her tongue who gets her man.

Louis : Les Poissons, Les Poissons / How I love Les Poissons / Love to chop and to serve little fish / First I cut off their heads, then I pull out their bones / Ah, mais oui ça c'est toujours delish / Les poissons, les poissons, Hee-hee-hee, ho-ho-ho! / With the cleaver I hack them in two / I pull out what's inside, and I serve it up fried / 'Cause I love little fishes, don't you? / Here's something for tempting the palate / Prepared in the classic technique / First you pound the fish flat with the mallet / Then you slash through the skin, give the belly a slice / Then you rub some salt in, 'cause that makes it taste nice!
Louis : Zut alors! I have missed one.
Louis : Sacrebleu! What is this? / How on earth could I miss / Such a sweet, little succulent crab / Quel dommage, what a loss! / Here we go, in the sauce / Now some flour, I think just a dab / Now I'll stuff you with bread! / It don't hurt, 'cause you're dead / And you're certainly lucky you are / 'Cause it's gonna be hot in my big silver pot / Toodle-oo, mon poisson, au revoir!

I love you, Daddy.

Ariel : I wanna be where the people are, I wanna see, wanna see 'em dancing, walking around on those...
Ariel : What do you call 'em? Oh... feet!
Ariel : Flippin' your fins, you don't get too far, legs are required for jumping, dancing! Strolling along down a...
Ariel : What's that word again? Street! Up where they walk, up where they run, up where they stay all day in the sun, wandering free, wish I could be part of that world!