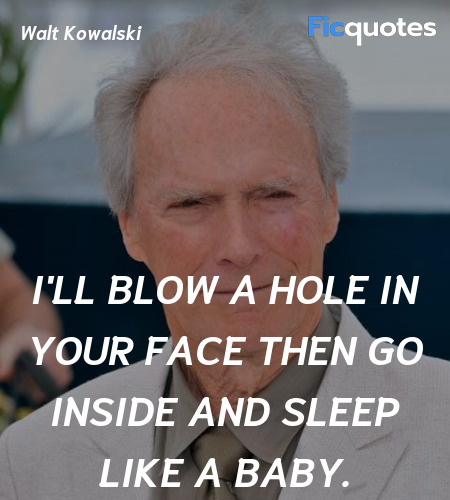 I'll blow a hole in your face then go inside and sleep like a baby. 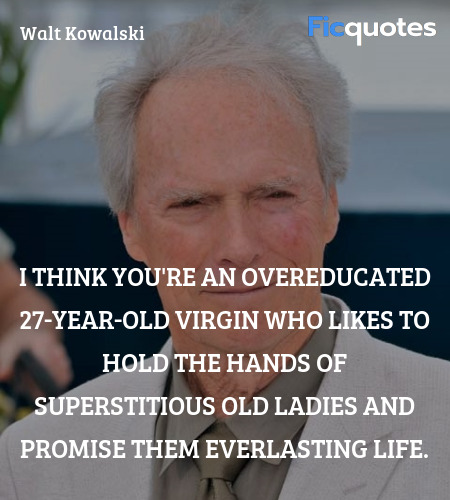 I think you're an overeducated 27-year-old virgin who likes to hold the hands of superstitious old ladies and promise them everlasting life. 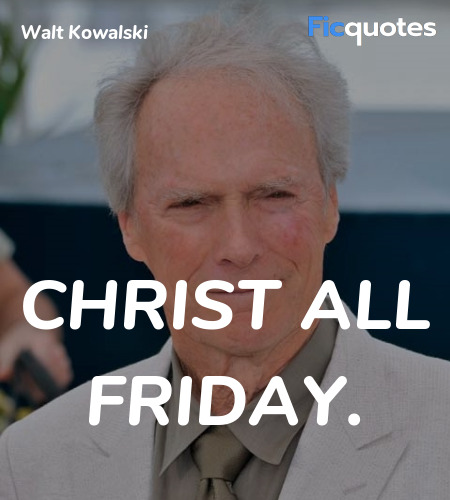 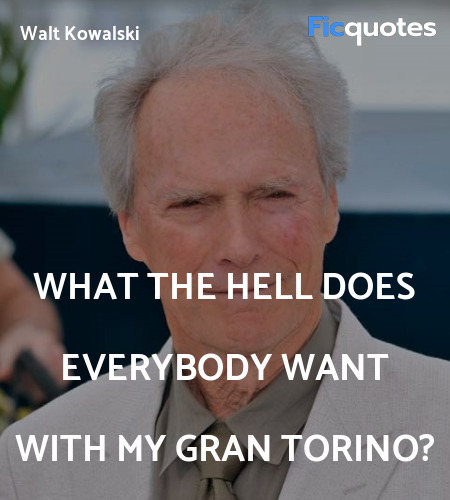 What the hell does everybody want with my Gran Torino?

I'm no hero. I was just trying to get that babbling gook off my lawn!

Would it kill you to buy American?

Walt Kowalski: Now go out and talk to him, and it ain't rocket science for Christ's sake.
Thao Vang Lor: Yeah, but I don't have a job, a car, or a girlfriend.
Barber Martin: Jesus. I shoulda blown his head off when I had the chance.
Walt Kowalski: Yeah. Maybe so.

Father Janovich: What are you gonna do, Walt?
Walt Kowalski: Whatever it is, they won't have a chance.

I know you're close to these people, but this pisses me off, Mr. Kowalski.

What is this thing called life?

Excuse me Sir, I need a haircut if you ain't too busy you old Italian son of a bitch prick barber. Boy, does my ass hurt from all of the guys at my construction job.

Walt Kowalski: Relax, zipperhead. I'm not gonna shoot you. I'd look down too, if I was you. You know, I knew you were a dipshit the first time I ever saw you. Then I thought you were worse with women than stealing cars... Toad.
Thao Vang Lor: It's Thao.
Walt Kowalski: What?
Thao Vang Lor: It's not Toad, my name is Thao.
Walt Kowalski: Yeah, well, you were blowing it with that girl who was there. Not that I give two shits about a toad like you.
Thao Vang Lor: You don't know what you're talking about.
Walt Kowalski: You're wrong, eggroll, I know exactly what I'm talking about. I may not be the most pleasant person to be around, but I got the best woman who was ever on this planet to marry me. I worked at it, it was the best thing ever happened to me. Hands down. But you, you know, you're letting Click-Clack, Ding-Dong and Charlie Chan just walk out with Miss What's-her-face. She likes you, you know? Though I don't know why!
Thao Vang Lor: Who?
Walt Kowalski: Yum Yum. You know, the girl in the purple sweater. She's been looking at you all day, stupid!
Thao Vang Lor: You mean Youa?
Walt Kowalski: Yeah... Yum Yum... yeah... nice girl... nice girl, very charming girl... I talked with her... yeah. But you, you just let her walk out right out with the Three Stooges. And you know why? 'Cause you're a big fat pussy. Well, I gotta go. Good day, pussycake.

Thao Vang Lor: You should quit. Those things are bad for you.
Walt Kowalski: Yeah? So's being in a gang.

Thao Vang Lor: What was it like to kill someone?
Walt Kowalski: You don't want to know.

Thao Vang Lor: What are we doing?
Walt Kowalski: You wanna carry your tools in a rice bag?

Thao Vang Lor: They were going to take me away. They're pissed because I blew my first initiation.
Walt Kowalski: Yeah, you're a real pussy for wanting to hang out with that gang. What was your initiation anyway?
Walt Kowalski: My Gran Torino?

Thug: How old are you anyway?
Sue Lor: Mentally, I'm way too old for you.

Sue Lor: There's a ton of food.
Walt Kowalski: Yeah, well just keep your hands off my dog.
Sue Lor: No worries, we only eat cats.

Walt Kowalski: I don't care about him.
Sue Lor: You hang out with him, you teach him to fix things, you saved him from that fucked cousin of ours.
Walt Kowalski: Watch your language, lady.
Sue Lor: And you're a better man to him than our own father was. You're a good man.

Hmong girls over here fit in better. The girls go to college and the boys go to jail.

Oh great, another asshole with an Asian girl fetish. God, this is getting so old.

My name? It's "Take your crude, overly obvious come-on to every woman who walks past and cram it." That's my name.

You got your whole life ahead of you, but for me, I finish things.

Oh, I've got one. A Mexican, a Jew, and a colored guy go into a bar. The bartender looks up and says, "Get the fuck out of here."

Get off my lawn!

Take these three items, some WD-40, a vise grip, and a roll of duct tape. Any man worth his salt can fix almost any problem with this stuff alone.

I once fixed a door that wasn't even broken yet.

You wanna know what it's like to kill a man? Well, it's goddamn awful, that's what it is. The only thing worse is getting a medal... for killing some poor kid that wanted to just give up, that's all. Yeah, some scared little gook just like you. I shot him in the face with that rifle you were holding in there a while ago. Not a day goes by that I don't think about it, and you don't want that on your soul.

I confess that I have no desire to confess.

I used to stack fucks likes you five feet high in Korea... use ya for sand bags.

Father Janovich: Walt Kowalski once said to me that I knew nothing about life or death, because I was an over-educated, 27-year-old virgin who held the hand of superstitious old women and promised them eternity.
Father Janovich: Walt definitely had no problem calling it like he saw it. But he was right. I knew really nothing about life or death, until I got to know Walt... and boy, did I learn.

What are you spooks up to?

Get me another beer, Dragon Lady! This one's running on empty.

I worked in Ford for 50 years and he sells Japanese cars.

You know, Thao and Sue are never going to find peace in this world as long as that gang's around.

I got blood on my hands, I'm soiled. That's why I'm going it alone tonight.

Duke: What you lookin' at old man?
Walt Kowalski: Ever notice how you come across somebody once in a while you shouldn't have fucked with? That's me.

Father Janovich: Why didn't you call the police?
Walt Kowalski: Well you know, I prayed for them to come but nobody answered.

Walt Kowalski: I'm here for a confession.
Father Janovich: Oh, Lord Jesus what have you done?