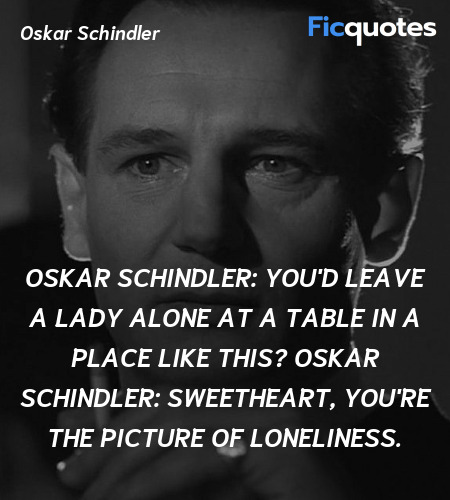 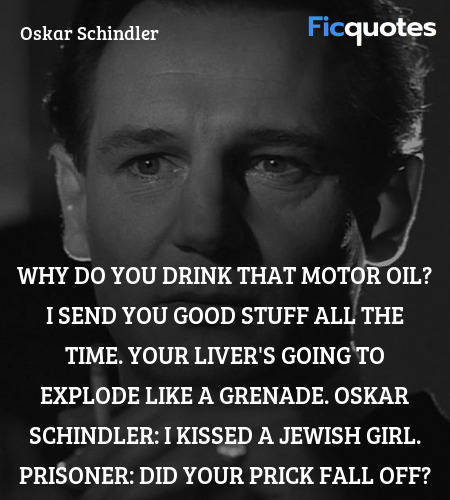 Why do you drink that motor oil? I send you good stuff all the time. Your liver's going to explode like a grenade.
Oskar Schindler: I kissed a Jewish girl.
Prisoner: Did your prick fall off? 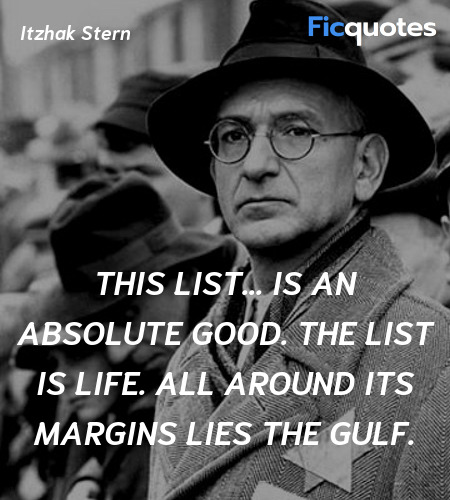 This list... is an absolute good. The list is life. All around its margins lies the gulf. 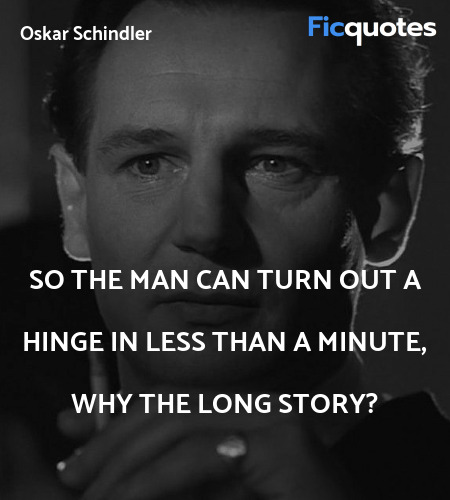 So the man can turn out a hinge in less than a minute, why the long story?

It's Hebrew, it's from the Talmud. It says, "Whoever saves one life, saves the world entire."

No doorman or Maitre d' will ever mistake you again. I promise.

Reiter: I'm a graduate of Civil Engineering from the University of Milan.
Amon Goeth: Ah, an educated Jew... like Karl Marx himself. Unterscharfuehrer!
Hujar: Jawohl?
Amon Goeth: Shoot her.
Reiter: Herr Kommandant! I'm only trying to do my job!
Amon Goeth: Ja, I'm doing mine.

This is very cruel, Oskar. You're giving them hope. You shouldn't do that. That's cruel!

Amon Goeth: Can you believe this? As if I don't have enough to do, they come up with this? I have to find every rag buried up here and burn it. The party's over, Oskar. They're closing us down, sending everybody to Auschwitz.
Oskar Schindler: When?
Amon Goeth: I don't know. As soon as I can arrange the shipments, maybe thirty, forty days. That ought to be fun.

The truth, Helen, is always the right answer.

They cast a spell on you, you know, the Jews. When you work closely with them, like I do, you see this. They have this power. It's like a virus. Some of my men are infected with this virus. They should be pitied, not punished. They should receive treatment because this is as real as typhus. I see it all the time. It's a matter of money? Hmm?

One of you is a very lucky girl. There is an opening for a job away from all this back-breaking work, in my new villa. Umm, which of you has domestic experience? Ja, on second thought, I don't really want someone else's maid. All those annoying habits I'd have to undo.

We won't have arguments with these people.

Amon Goeth: It has a nice sheen to it. What is it, silk?
Oskar Schindler: Of course! I'd say I'd get you one but the man who made it's probably dead.

Today is history. Today will be remembered. Years from now the young will ask with wonder about this day. Today is history and you are part of it. Six hundred years ago, when elsewhere they were footing the blame for the Black Death, Casimir the Great - so called - told the Jews they could come to Krakow. They came. They trundled their belongings into the city. They settled. They took hold. They prospered in business, science, education, the arts. They came with nothing. And they flourished. For six centuries there has been a Jewish Krakow. By this evening those six centuries will be a rumor. They never happened. Today is history.

Amon Goeth: You want these people?
Oskar Schindler: These people. My people. I want my people.
Amon Goeth: Who are you? Moses?

Stern, if this factory ever produces a shell that can actually be fired, I'll be very unhappy.

Don't let things fall apart, Oskar. I work too hard.
S.S. Guard: Occupation?
Moses: I am a writer. I play the flute.
Itzhak Stern: But Moses is also a skilled metal worker. He can make pots, he can make tanks, he can make whatever Mr Schindler asks.

Cry, and I will have you arrested! I swear to God!

War brings out the worst in people.

Boxed teas are good - coffee, pâté... um, kielbasa sausage, cheeses, beluga caviar. And of course, who could live without German cigarettes? As many as you can find. Some more fresh fruit, the real rarities - oranges, lemons, pineapples. I'll need several boxes of Cuban cigars, the best. And dark unsweetened chocolate, not in the shape of lady fingers - the chunk chocolate, as big as my hand, you sample at wine tastings. I'm going to need lots of cognac, the best, Hennessy. Dom Pérignon champagne... Um, get L'Espadon sardines. And, oh - try to find nylon stockings.

They won't soon forget the name "Oskar Schindler" around here. "Oskar Schindler," they'll say, "Everybody remembers him. He did something extraordinary. He did what no one else did. He came with nothing, a suitcase, and built a bankrupt company into a major manufactory. And left with a steamer trunk, two steamer trunks, of money. All the riches of the world."

Helen Hirsch: My first day here, he beat me because I threw out the bones from dinner. He came down at midnight and asked for them. And I asked him, I don't know how, I could never ask him now, I said, "Why are you beating me?" He said, "The reason I beat you now is because you ask why I beat you."
Oskar Schindler: I am sorry for your troubles, Helen.
Helen Hirsch: I have accepted them.
Oskar Schindler: Accepted them?
Helen Hirsch: One day, he will shoot me.
Oskar Schindler: No, he won't shoot you.
Helen Hirsch: He will. I see things. We were on the roof on Monday, young Lisiek and I and we saw the Herr Kommandant come out of the house on the patio right there below us and he drew his gun and shot a woman who was passing by. Just a woman with a bundle, just shot her through the throat. She was just a woman on her way somewhere, she was no faster or slower or fatter or thinner than anyone else and I couldn't guess what had she done. The more you see of the Herr Kommandant the more you see there are no set rules you can live by, you cannot say to yourself, "If I follow these rules, I will be safe."
Oskar Schindler: He won't shoot you because he enjoys you too much. He enjoys you so much he won't even let you wear the star. He doesn't want anyone to know it's a Jew he's enjoying. He shot the woman from the steps because she meant nothing to him. She was just one of a series neither offending him or pleasing him.

My father was fond of saying you need three things in life - a good doctor, a forgiving priest, and a clever accountant. The first two, I've never had much use for.