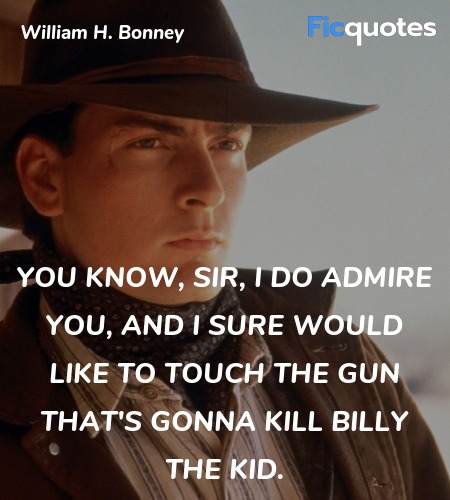 You know, Sir, I do admire you, and I sure would like to touch the gun that's gonna kill Billy the Kid. 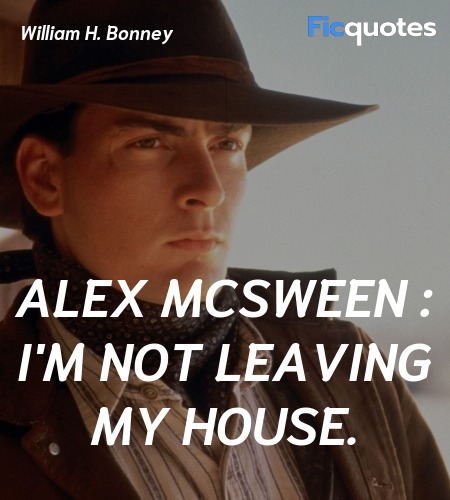 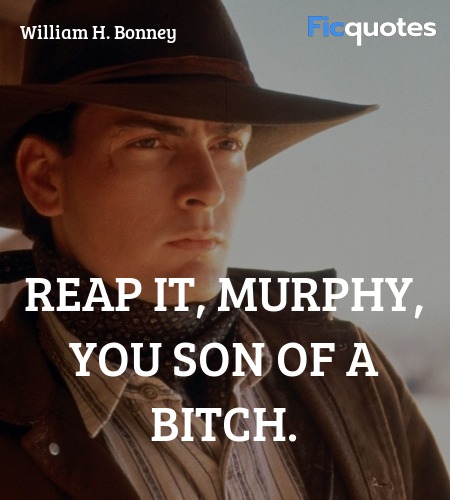 Reap it, Murphy, you son of a bitch. 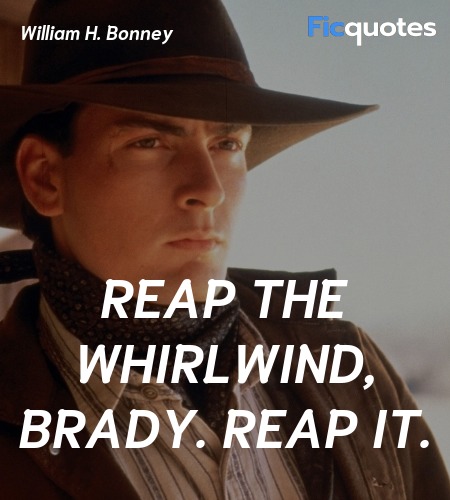 Reap the whirlwind, Brady. Reap it.

If we're caught, we're gonna hang... But there's many a slip twixt the cup and the lip.

Dear Governor Axtell. I've heard that you will give 200 dollars for my head. Perhaps we should meet and talk. I am at the Juarez village at the border. Send 3 men, and instruct them not to shoot, as I am unarmed. In short, Sir; I surrender. Your obedient servant William H. Bonney. PS: I changed my mind. Kiss my ass."

William H. Bonney : Alex, if you stay they're gonna kill you. And then I'm gonna have to to go around and kill all the guys who killed you. That's a lot of killing.

Richard Brewer : Lord, forgive us for our wrongdoings, for our misguidance by heathen religions. Thank you for keeping us alive. Lord, be with us in doing the right thing. Our Father, who art in Heaven, hallow be thy name.
William H. Bonney : Please, Dick. It's getting cold. I could've killed you, Dick. I could've killed you, but I don't want to kill you. I want to eat.

Charley Bowdre : Hey, Billy. I've got to get out of here. I've got a wife. She's this little Mexican gal. Please, Billy.
William H. Bonney : Charley, if you don't stand up and start whooping some ass, you ain't ever gonna see her again.

Yen Sun : I am unclean. That is not for a young man.
Doc : Yen, I used to ride with the dirty underwear gang out of Liberty, Missouri.

Advices from Lincoln report that Jose Chavez Y Chavez moved to California where he changed his name and took work on a fruit ranch. Josiah 'Doc' Scurlock is reported to have left the West for the East, taking with him a celestial bride, her mother and fourteen brothers and sisters. Susan McSween went on to see both her husband's and John Tunstall's dreams to fruition, by becoming one of most prominent cattlewomen of all time. Governor Axtel was forced to resign by President Rutherford B. Hayes and both the Murphy-Dolan faction and the Santa Fe Ring collapsed. William H. Bonney, also known as 'Billy the Kid' continued to ride, never leaving New Mexico. He was caught in Fort Sumner by Sheriff Pat Garret and killed. Sources report that he was unarmed, and shot in the dark. He was buried with Charley Bowdre at Old Fort Sumner. Advices report that sometime later, an unidentified person snuck into the graveyard and chiseled an inscription. The epitaph read only one word... 'Pals'.

Yen Sun : I know what you've come to do. You've come to lay with me and cut me into tiny pieces. You're the bandit that eats children and old people.
Doc : I eat meat and potatoes.

"Dirty Steve" Stephens : Damn good riding with you, Chavez.
Chavez : Many nights, my friend... Many nights I've put a blade to your throat while you were sleeping. Glad I never killed you, Steve. You're all right...

"Dirty Steve" Stephens : You're a red ass Mexican greaser, you do it with your horse. Mexican greaser!
Chavez : Come here, you little white chicken shit.