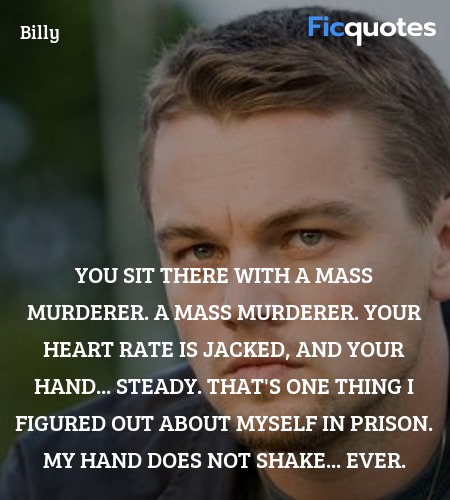 You sit there with a mass murderer. A mass murderer. Your heart rate is jacked, and your hand... steady. That's one thing I figured out about myself in prison. My hand does not shake... ever. 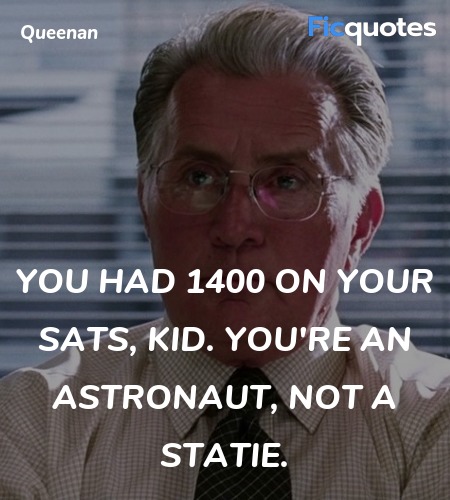 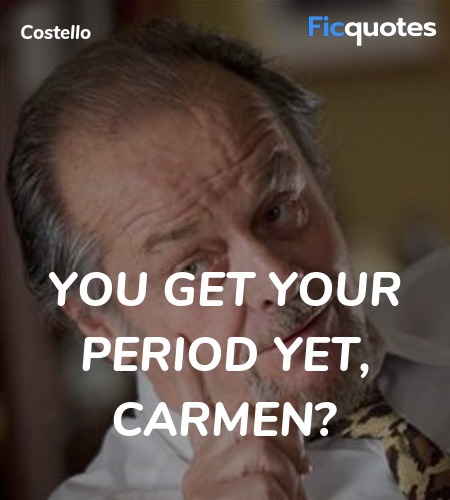 You get your period yet, Carmen? 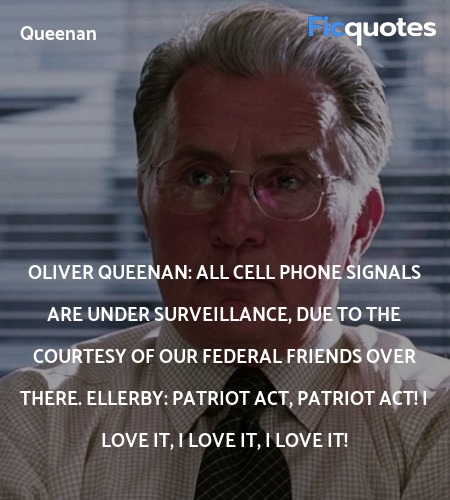 You want some coke? There it is. Don't move till you're numb.

I'm gonna go have a smoke right now. You want a smoke? You don't smoke, do ya, right? What are ya, one of those fitness freaks, huh? Go fuck yourself.

One of us had to die. With me, it tends to be the other guy.

Colin Sullivan: Yeah, shoot a cop, Einstein. Watch what happens.
Billy Costigan: What would happen is this bullet would go right through your fucking head!

Oliver Queenan: One of you mugs got a light.

You hear me, you two-faced faggot?

We're not here to solve the case of the missing scumbag, we're here to nail Costello.

Do you got any suits at home or do you like to come to work like you're gonna invade Poland?

This unit is new, and you are the newest members of it. You have been selected from the basis of intelligence and aptitude. This is an elite unit. Our job is to smash, or marginally disrupt, organized crime in the city by enhanced cooperation of the FBI, represented here today by Frank Lazio. And we will do it. By organized crime in the city, you know who we mean - that's Jackie Costigan, that's an old picture. Jackie met his demise. Last known photograph. Costello uses three key guys: that's Fitzy - off-the-boat psycho who lives with his mother, who's straight out of Going My Way. Delahunt - muscle. French - the number one. But of course the rock star - you know who. We've done a briefing. Books, so read up. I want any and all ideas so I can pass them off as my own. Word hard, you'll rise fast. You're in the best possible position in the department. Let's go to work.

Fitzy: She didn't notice us, she must be a cop.
Delahunt: Yeah, she's probably the fucking Police Commissioner.

Billy Costigan: No, I gotta get out. I can't be doing this anymore. You know what's gonna happen?
Oliver Queenan: What?
Billy Costigan: I know he's gonna find out who I am and he's gonna fucking kill me.
Oliver Queenan: I'm really sorry... I swear to God I am. I'll get you out of this. It won't be immediately but I will get you out. Two weeks at most.

Oliver Queenan: You're a worker. You rise fast.
Dignam: Like a 12-year-old's dick.
Colin Sullivan: Thank you, Sergeant.
Dignam: My pleasure.

Oliver Queenan: You don't have much family.
Billy Costigan: I don't have any family.

We deal in deception here. What we do not deal with is self-deception.

Dignam: Your fuckin' family's dug into the Southie projects like ticks. Three-decker men at best. You, however, grew up on the North Shore, huh? Well, la-di-fuckin'-da. You were kind of a double kid, I bet, right? Huh? One kid with your old man, one kid with your mother. You're upper-middle class during the weeks, then you're droppin' your "R"s and you're hangin' in the big, bad Southie projects with your daddy, the fuckin' donkey on the weekends. I got that right?
Dignam: Yup. You have different accents? You did, didn't you? You little fuckin' snake. You were like different people.
Billy Costigan: You a psychiatrist?
Dignam: Well, if I was I'd ask you why you're a Statie making 30 grand a year. And I think if I was Sigmund fuckin' Freud I wouldn't get an answer. So tell me, what's a lace-curtain motherfucker like you doing in the Staties?
Billy Costigan: Families are always rising or falling in America, am I right?
Oliver Queenan: Who said that?
Billy Costigan: Hawthorne.
Dignam: What's the matter, smartass, you don't know any fuckin' Shakespeare?

Oliver Queenan: Do you know what we do here? My section?
Billy Costigan: Sir, yes, sir. I have an idea...
Dignam: Whoa, whoa, whoa. Let's say you have no idea and leave it at that, okay? No idea. Zip. None. If you had an idea of what we do, we would not be good at what we do, now would we? We would be cunts. Are you calling us cunts?
Oliver Queenan: Staff Sergeant Dignam has a style of his own. I'm afraid we all have to get used to it.

Ellerby: Staff Sergeant Dignam is our liaison to the the undercover department, his undercover work is extensive. He's here to give us his report. Sergeant Dignam.
Dignam: Ok. My people are out there. They're like fuckin' indians. You're not gonna see 'em you're not gonna hear about 'em except from me or Captain Queenan. You will not ever know the identity of undercover people. Unfortunately, this shithole has more fuckin' leaks than the Iraqi Navy.
Ellerby: Fuck yourself.
Dignam: I'm tired from fuckin' your wife.
Ellerby: How's your mother?
Dignam: Good, she's tired from fuckin' my father.

Dignam: This is unbelievable. Who put the fuckin' cameras in this place?
Police Camera Tech: Who the fuck are you?
Dignam: I'm the guy who does his job. You must be the other guy.

My theory on Feds is that they're like mushrooms, feed 'em shit and keep 'em in the dark

Now whenever you make a call ask for Mikey, MIKEY!... huh... you ask for a Mikey 'cause there is no Mikey.

Just keep it. Buy yourself some makeup.

When you decide to be something, you can be it. That's what they don't tell you in the church. When I was your age they would say we can become cops, or criminals. Today, what I'm saying to you is this: when you're facing a loaded gun, what's the difference?

What we generally do - in this country... is one guy brings the items and the other guy pays him. No tickee, no laundry!

I don't want to be a product of my environment. I want my environment to be a product of me. Years ago we had the church. That was only a way of saying - we had each other. The Knights of Columbus were real head-breakers; true guineas. They took over their piece of the city. Twenty years after an Irishman couldn't get a fucking job, we had the presidency. May he rest in peace. That's what the niggers don't realize. If I got one thing against the black chappies, it's this - no one gives it to you. You have to take it.

You know who I am.

There is no one more full of shit than a cop except for a cop on TV.