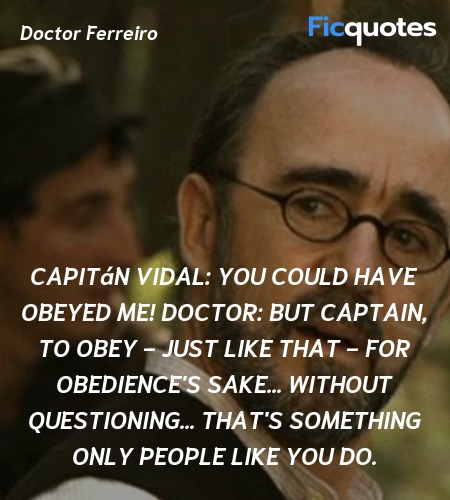 Capitán Vidal: You could have obeyed me!
Doctor: But Captain, to obey - just like that - for obedience's sake... without questioning... That's something only people like you do. 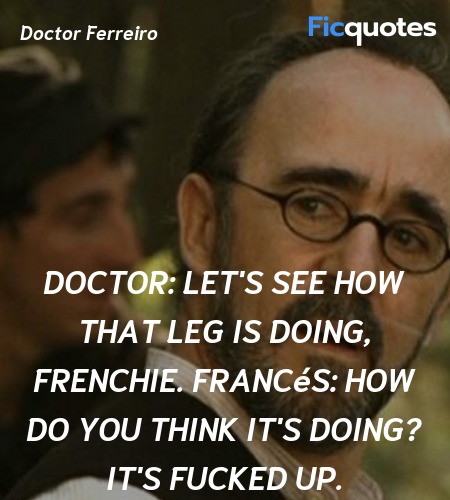 Doctor: Let's see how that leg is doing, Frenchie.
Francés: How do you think it's doing? It's fucked up. 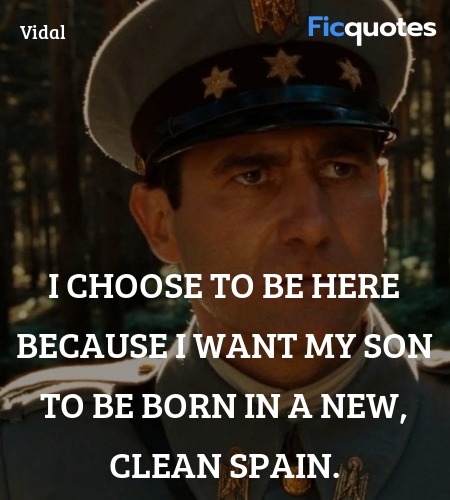 I choose to be here because I want my son to be born in a new, clean Spain. 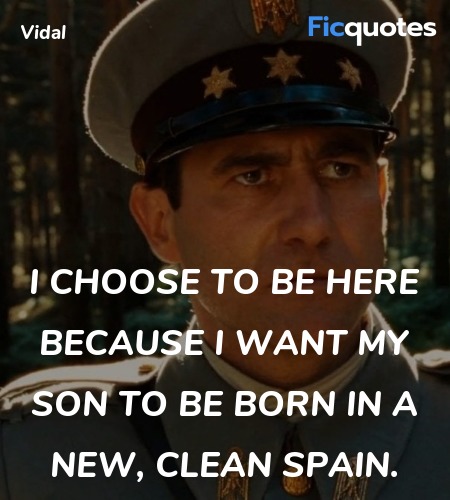 I choose to be here because I want my son to be born in a new, clean Spain.

My mother told me to be wary of fauns.

I'm not some old man! Or a wounded prisoner! Motherfucker... Don't you dare touch the girl. You won't be the first pig I've gutted!

Hi! Are you a fairy?

My father was a tailor.

Have you seen my mother? She's very beautiful.

Hello. I am Princess Moanna, and I am not afraid of you.

You'll meet her, she's very pretty, even though sometimes she's sad for many days at a time. You'll see, when she smiles, you'll love her.

Many, many years ago in a sad, faraway land, there was an enormous mountain made of rough, black stone. At sunset, on top of that mountain, a magic rose blossomed every night that made whoever plucked it immortal. But no one dared go near it because its thorns were full of poison. Men talked amongst themselves about their fear of death, and pain, but never about the promise of eternal life. And every day, the rose wilted, unable to bequeath its gift to anyone... forgotten and lost at the top of that cold, dark mountain, forever alone, until the end of time.

Capitán Vidal: Damn this cigarette is good! Real tobacco - hard to find.
El Tarta: G-g-g-go to hell.
Capitán Vidal: Damn, Garces. We catch one and he turns out to be a stutterer. We'll be here all night.
Garcés: As long as he talks.
Capitán Vidal: Garces is right. You'd do better to tell us everything. But to make sure it happens, I brought along a few tools. Just things you pick up along the way. At first I won't be able to trust you, but after I use this, you'll own up to a few things. When we get to these we'll have developed a... how can I put this? A closer bond, much like brothers. You'll see. And when we get to this one, I'll believe anything you tell me.

Doctor: Just one more thing, Captain. What makes you so sure the baby is a male?
Capitán Vidal: Don't fuck with me.