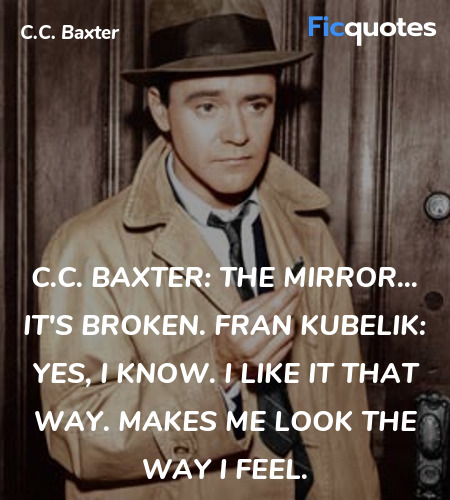 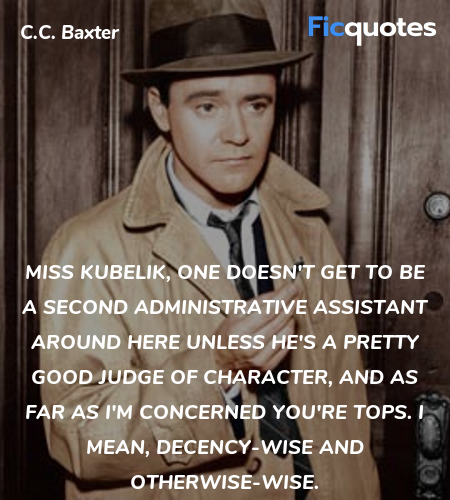 Miss Kubelik, one doesn't get to be a second administrative assistant around here unless he's a pretty good judge of character, and as far as I'm concerned you're tops. I mean, decency-wise and otherwise-wise.

Sheldrake's Wife: What is it, Jeff? Who's on the phone?
J.D. Sheldrake: One of our employees had an accident. I don't know why they bother me with these things on Christmas day.

Oh, I have a present for you. I didn't quite know what to get you. Besides, it's kind of awkward for me shopping, so here's a hundred dollars. You go and buy yourself something.

J.D. Sheldrake: Ya know, you see a girl a couple of times a week, just for laughs, and right away they think you're gonna divorce your wife. Now I ask you, is that fair?
C.C. Baxter: No, sir, it's very unfair... Especially to your wife.

Fran Kubelik: What do you call it when somebody keeps getting smashed up in automobile accidents?
C.C. Baxter: Bad insurance risk?
Fran Kubelik: That's me with men.

Fran Kubelik: [Baxter is straining spaghetti with a tennis racket] Say, you're pretty good with that racket.
C.C. Baxter: You should see my backhand. Wait'll you see me serve the meatballs.

Fran Kubelik: Shall I light the candles?
C.C. Baxter: It's a must! Gracious living-wise.

You fool. You damn fool.

I was jinxed from the word go. The first time I was ever kissed was in a cemetery.

Just because I wear a uniform doesn't make me a girl scout.

Why do people have to love people anyway?

Fran Kubelik: He's a taker.
C.C. Baxter: A what?
Fran Kubelik: Some people take, some people get took. And they know they're getting took and there's nothing they can do about it.

When you're in love with a married man, you shouldn't wear mascara. 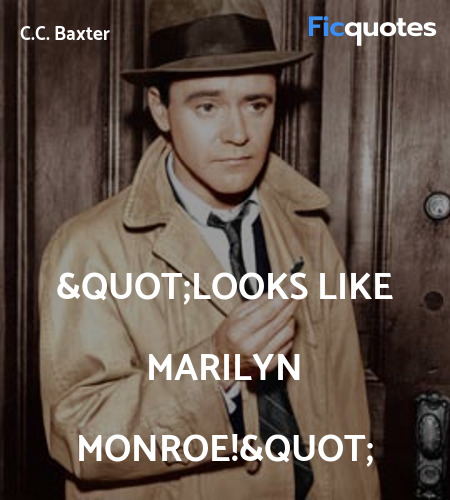 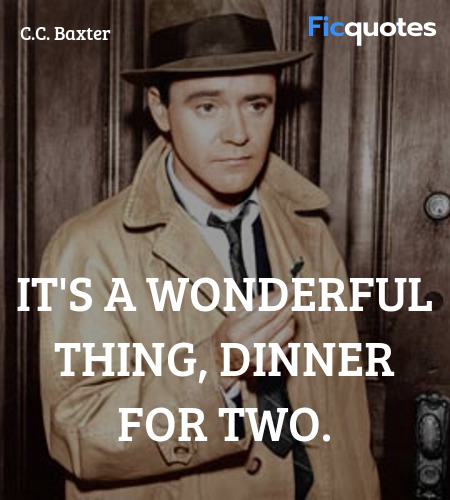 It's a wonderful thing, dinner for two.

On November 1st, 1959, the population of New York City was 8,042,783. If you laid all these people end to end, figuring an average height of five feet six and a half inches, they would reach from Times Square to the outskirts of Karachi, Pakistan. I know facts like this because I work for an insurance company - Consolidated Life of New York. We're one of the top five companies in the country. Our home office has 31,259 employees, which is more than the entire population of uhh... Natchez, Mississippi. I work on the 19th floor. Ordinary Policy Department, Premium Accounting Division, Section W, desk number 861.

Ya know, I used to live like Robinson Crusoe; I mean, shipwrecked among 8 million people. And then one day I saw a footprint in the sand, and there you were.

That's the way it crumbles... cookie-wise.