Don't let yourself get attached to anything you are not willing to walk out on in 30 seconds flat if you feel the heat around the corner. 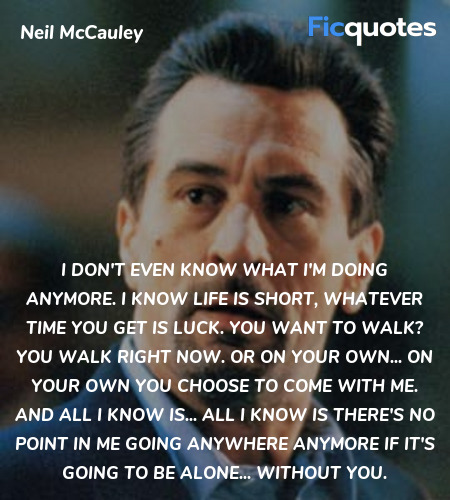 I don't even know what I'm doing anymore. I know life is short, whatever time you get is luck. You want to walk? You walk right now. Or on your own... on your own you choose to come with me. And all I know is... all I know is there's no point in me going anywhere anymore if it's going to be alone... without you.

Right now I want you to sit on the floor and put your hands on your head, anybody feels sick, anybody got heart trouble, go ahead and lean against the wall.

I have this reoccurring dream. I'm sitting at this big banquet table: all of the victims of all the murders I've ever worked are sitting at this table and they're staring at me, they have these black eyeballs because they have eight ball hemorrhages from their head wounds and there they are these big balloon people because I found them two weeks after they've been found under the bed. The neighbors reported the smell and there they are: just sitting there. 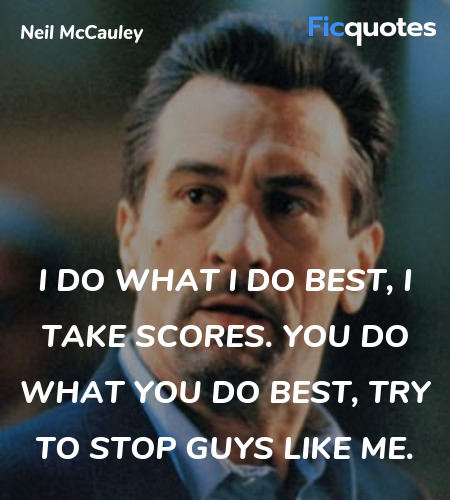 I do what I do best, I take scores. You do what you do best, try to stop guys like me.

He knew the risks, he didn't have to be there. It rains... you get wet. 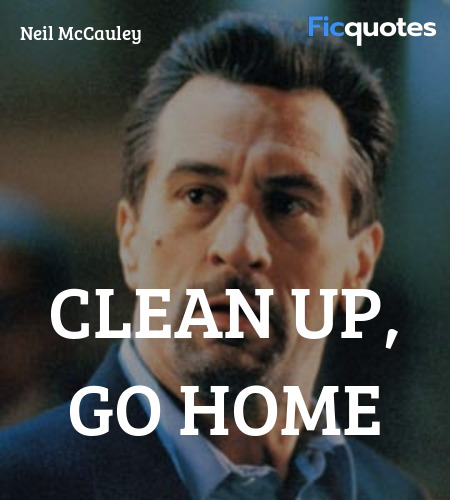 And I am double the worst trouble you ever had.

Our problem is take the bank or split right now, do not go home, do not pack, nothing. 30 secs flat from now we are gone on our separate ways, that's it...

Eight to ten hours is enough time to set up a new "out". After that he's gone. Bye, bye, bang! 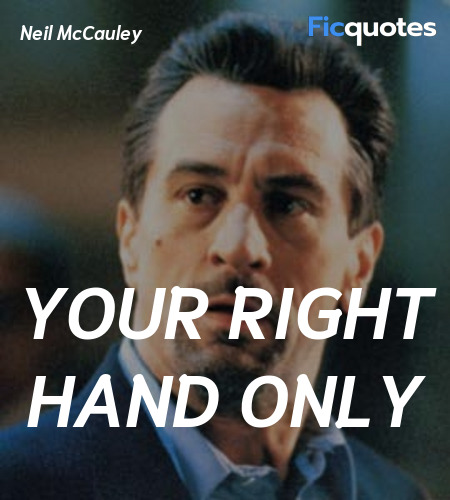 your right hand only

put your hands where I can see them

I'll be right back, just leave it running.

For me the sun rises and sets with her, man.

The bank is worth the risk. I need it, brother. We should stay and take it down.

behind you on the right.

So, so long, brother. You take it easy. You're home free.

be it as it may

By the time I get to Phoenix, we'll be rising. He'll probably leave a note right on the door.

Who? Who? What are you, a fucking owl?

I gotta hold on to my angst. I preserve it because I need it. It keeps me sharp, on the edge, where I gotta be.

That's exactly what they're gonna do, they're gonna walk. This is my operation, I have tactical command that supercedes your rank, they will walk away and you will let them...

Gimme all you got!

Here's the update: Hugh Benny has reformed his wayward life and become a "born again good citizen", apparently Neil got sold out to us by a cowboy named "Waingro", Waingro used to be a part of Neil's crew then he went to work for a money launderer named Van Zant ,units are at Van Zant's house as we speak because he got shot dead earlier tonight, if Neil goes after anyone else, it's going to be Waingro, Waingro just got himself a suite at the airport Marquee under the name "Jameson" he's there now I want you to get that to bail bondsmen, bookies, assignment officers and snitches in county anyone you can think of that will put it out on the street, deploy a team down at the hotel and personally check their COMMS every thirty minutes because maybe Neil would go for him

I'm angry. I'm very angry, Ralph. You know, you can ball my wife if she wants you to. You can lounge around here on her sofa, in her ex-husband's dead-tech, post-modernistic bullshit house if you want to. But you do not get to watch my fucking television set!

It's like you said. All I am is what I'm going after.

What are you going to take them on? Breaking and entering? They didn't steal anything, don't you get it? It gets knocked back to some chicken shit misdemeanor they do six months and their out, no fucking way

Tell SIS I want full surveillance on McCauley twenty four hours around the clock day and night never close open seven days a week bug, the car and the house I want pictures of who he moves with and sits with then you guys run makes on them if they got jackets I want to see who they move and sit with and I want it up and running by tomorrow night

Alright we're going to have to take them in the car wait until their all in, take clean shots, and watch your background

you ratted McCauley to us, how'd you know?Who told you?WHO?

We hope you enjoyed reading Heat quotes. Browse other movie quotes on Ficquotes also. If you think we missed any quote from Heat, please send it to us so we can expand our collection of the best Heat quotes.