Directed by: David Fincher
Written by: Andrew Kevin Walker
Starring: Morgan Freeman, Brad Pitt, Kevin Spacey
Released on: September 22, 1995
Taglines: Earnest Hemingway once wrote, "The world is a fine place and worth fighting for." I believe the second part. 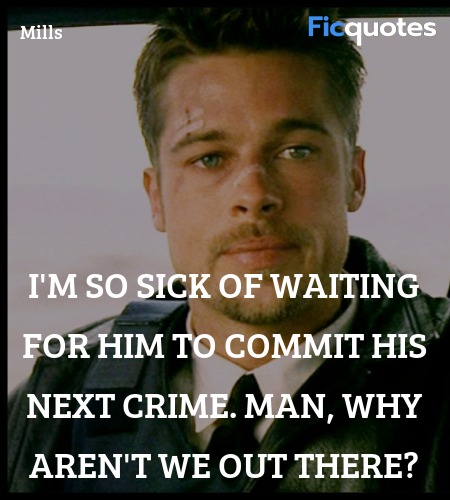 I'm so sick of waiting for him to commit his next crime. Man, why aren't we out there? 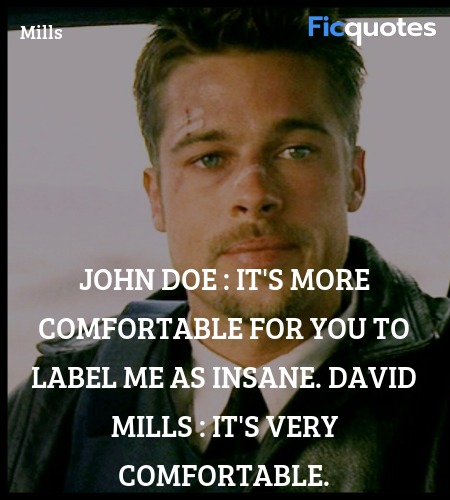 John Doe : It's more comfortable for you to label me as insane.
David Mills : It's VERY comfortable. 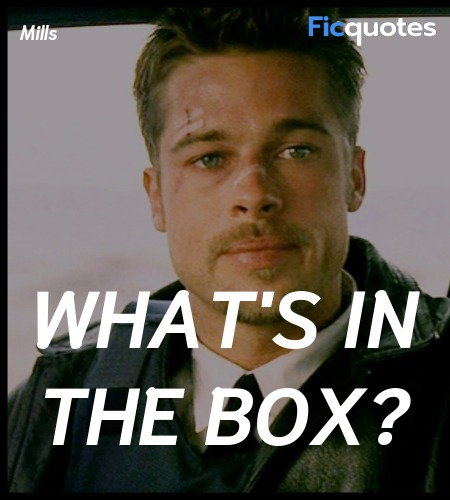 What's in the box?

You're no messiah. You're a movie of the week. You're a fucking t-shirt, at best. 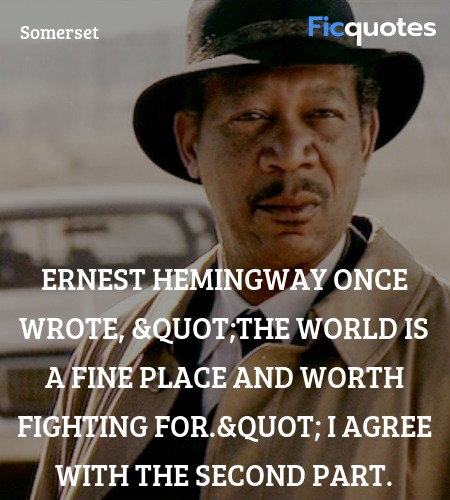 Ernest Hemingway once wrote, "The world is a fine place and worth fighting for." I agree with the second part.

I can't tell you whether or not to keep the baby. But if you do, you spoil that kid every chance you get.

This isn't going to have a happy ending.

Get out of the FUCKING HALL, police!

David. If you kill him, he will win.

How much money do we have left?

Who knows. So many freaks out there doin' their little evil deeds they don't wanna do... "The voices made me do it. My dog made me do it. Jodie Foster told me to do it."

I don't think you're quitting because you believe these things you say. I don't. I think you want to believe them, because you're quitting. And you want me to agree with you, and you want me to say, "Yeah, yeah, yeah. You're right. It's all fucked up. It's a fucking mess. We should all go live in a fucking log cabin." But I won't. I won't say that. I don't agree with you. I do not. I can't.

Ladies and gentlemen, we have ourselves a homicide.

Detective Taylor : Neighbors heard them screaming at each other, like for two hours, and it was nothing new. Then they heard the gun go off, both barrels. Crime of passion.
William Somerset : Yeah, just look at all the passion on that wall.

I had to consider the integrity of the scene.

You know what happens if you kill a suspect!

Even the most promising clues usually only lead to others.

But you gotta be a, a hero. You want to be a champion. Well, let me tell you. People don't want a champion. They want to eat cheeseburgers, play the lotto and watch television.

It's impressive to see a man feeding off his emotions.

California, tell your people to stay away. Stay away now, don't - don't come in here. Whatever you hear, stay away! John Doe has the upper hand!

If John Doe's head splits open and a UFO should fly out, I want you to have expected it.

On the subway today, a man came up to me to start a conversation. He made small talk, a lonely man talking about the weather and other things. I tried to be pleasant and accommodating, but my head hurt from his banality. I almost didn't notice it had happened, but I suddenly threw up all over him. He was not pleased, and I couldn't stop laughing.

If we catch John Doe and he turns out to be the devil, I mean if he's Satan himself, that might live up to our expectations, but he's not the devil. He's just a man.

We hope you enjoyed reading Se7en quotes. Browse other movie quotes on Ficquotes also. If you think we missed any quote from Se7en , please send it to us so we can expand our collection of the best Se7en quotes.