On the Waterfront Quotes

Best On the Waterfront Movie Quotes

Directed by: Elia Kazan
Written by: Budd Schulberg, Budd Schulberg
Starring: Marlon Brando, Karl Malden, Lee J. Cobb
Released on: October 12, 1954
Taglines: It walked away with just about every award there was - and it still could !

On the Waterfront Quotes 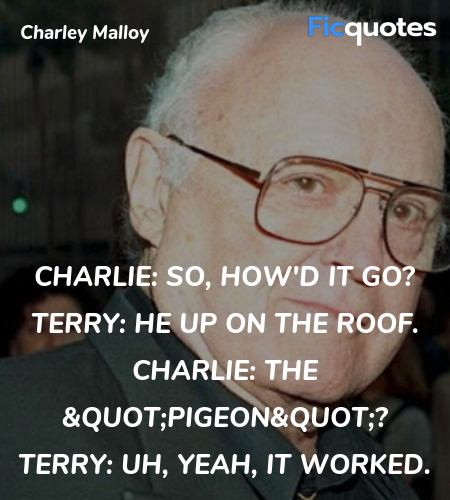 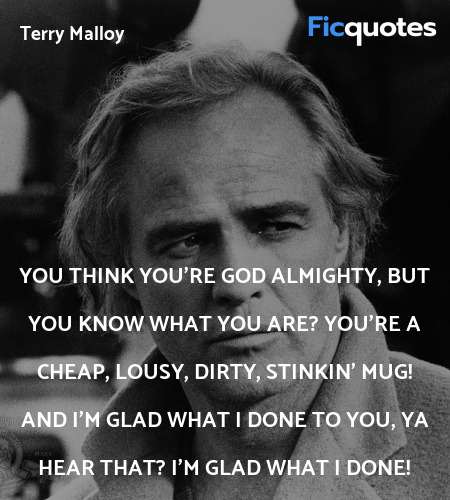 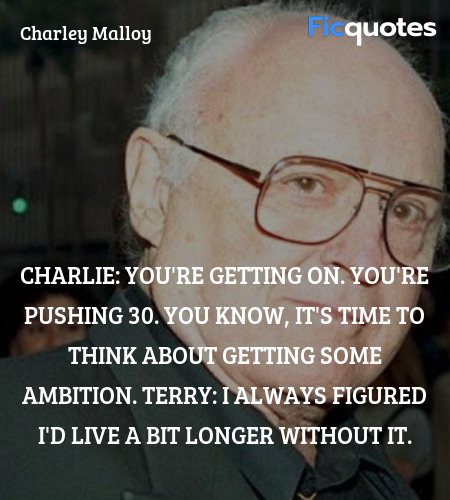 Charlie: You're getting on. You're pushing 30. You know, it's time to think about getting some ambition.
Terry: I always figured I'd live a bit longer without it. 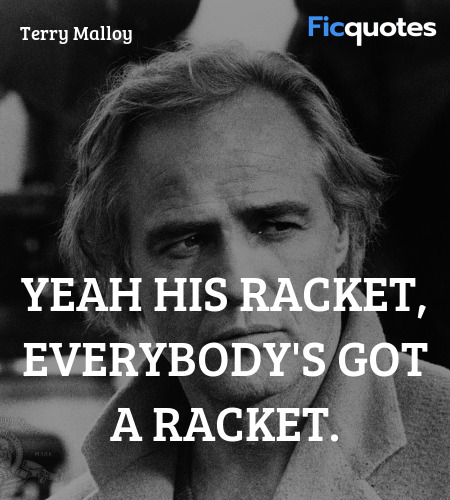 Yeah his racket, everybody's got a racket.

You want to know what's wrong with our waterfront? It's the love of a lousy buck. It's making love of a buck - -the cushy job - -more important than the love of man!

Hey, you wanna hear my philosophy of life? Do it to him before he does it to you.

Some people think the Crucifixion only took place on Calvary. Well, they better wise up!

You'd better get rid of that gun, unless you haven't got the guts, and if you don't, you'd better hang on to it!

Boys, this is my church! And if you don't think Christ is down here on the waterfront you've got another guess coming!

Charlie: Look, kid, I - how much you weigh, son? When you weighed one hundred and sixty-eight pounds you were beautiful. You coulda been another Billy Conn, and that skunk we got you for a manager, he brought you along too fast.
Terry: It wasn't him, Charley, it was you. Remember that night in the Garden you came down to my dressing room and you said, "Kid, this ain't your night. We're going for the price on Wilson." You remember that? "This ain't your night"! My night! I coulda taken Wilson apart! So what happens? He gets the title shot outdoors on the ballpark and what do I get? A one-way ticket to Palooka-ville! You was my brother, Charley, you shoulda looked out for me a little bit. You shoulda taken care of me just a little bit so I wouldn't have to take them dives for the short-end money.
Charlie: Oh I had some bets down for you. You saw some money.
Terry: You don't understand. I coulda had class. I coulda been a contender. I coulda been somebody, instead of a bum, which is what I am, let's face it. It was you, Charley.

You take it from here, Slugger.

Isn't it simple as one, two, three? One: The working conditions are bad. Two: They're bad because the mob does the hiring. And three: The only way we can break the mob is to stop letting them get away with murder.

Some people think the Crucifixion only took place on Calvary. They better wise up! Taking Joey Doyle's life to stop him from testifying is a crucifixion. And dropping a sling on Kayo Dugan because he was ready to spill his guts tomorrow, that's a crucifixion. And every time the Mob puts the pressure on a good man, tries to stop him from doing his duty as a citizen, it's a crucifixion. And anybody who sits around and lets it happen, keeps silent about something he knows that happened, shares the guilt of it just as much as the Roman soldier who pierced the flesh of our Lord to see if he was dead.

You know you're not too funny today, fat man.

Quite a nose, huh? Some people just have a face that sticks in your mind.

You know this city's full of hawks? That's a fact. They hang around on the top of the big hotels. And they spot a pigeon in the park. Right down on him.

Conscience... that stuff can drive you nuts!