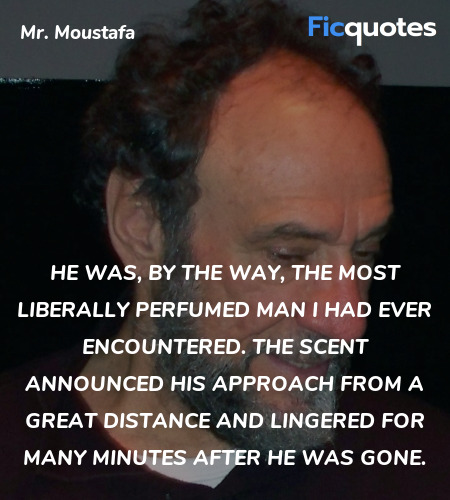 He was, by the way, the most liberally perfumed man I had ever encountered. The scent announced his approach from a great distance and lingered for many minutes after he was gone. 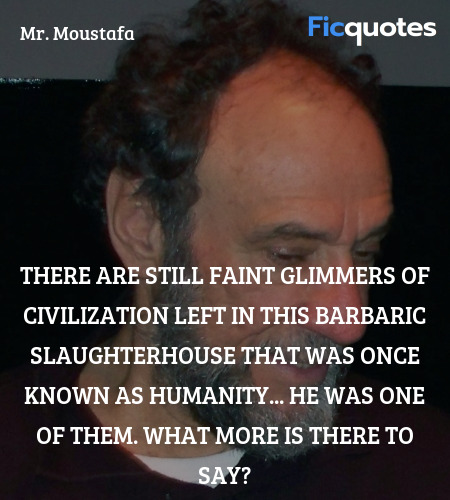 There are still faint glimmers of civilization left in this barbaric slaughterhouse that was once known as humanity... He was one of them. What more is there to say? 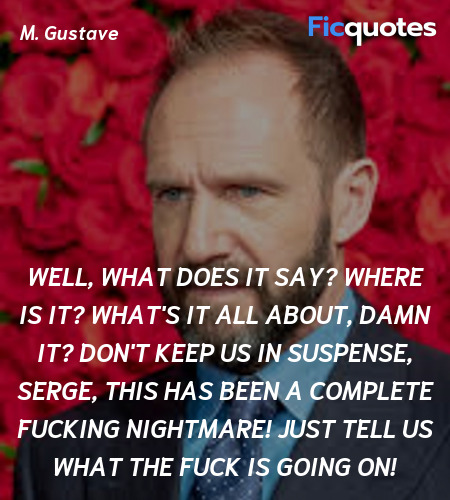 Well, what does it say? Where is it? What's it all about, damn it? Don't keep us in suspense, Serge, this has been a complete fucking nightmare! Just tell us what the fuck is going on! 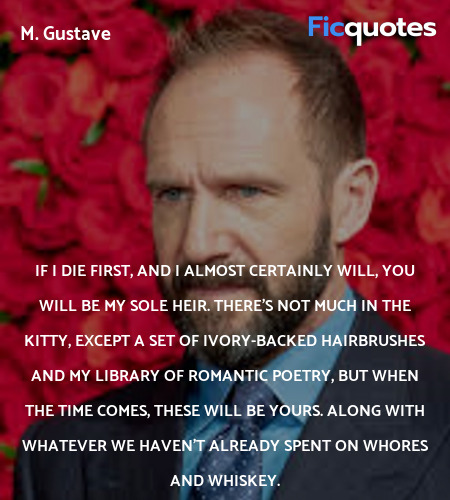 If I die first, and I almost certainly will, you will be my sole heir. There's not much in the kitty, except a set of ivory-backed hairbrushes and my library of romantic poetry, but when the time comes, these will be yours. Along with whatever we haven't already spent on whores and whiskey.

I give you my word, if you lay a finger on this man, I'll see you dishonorably discharged, locked up in the stockade, and hanged by sundown.

You can't arrest him just because he's a bloody immigrant, he hasn't done anything wrong!

I was perhaps for a time considered the best lobby boy we ever had at the Grand Budapest. I think I can say that. This one finally surpassed me. Although I must say, I am an exceptional teacher.

M. Gustave: How does one come by front row aisle seats for a first night at the Opera Toscana with one day's notice? How does one arrange a private viewing of the tapestry collection at the Royal Saxon Gallery? How does one secure a corner table at Chez Dominique on a Thursday?
M. Gustave: Ivan, darling, it's Gustave, hello!... Well, I was until about five minutes ago. We've taken it upon ourselves to clear out in a hurry, if you see what I mean... Well, through a sewer, as it happens... Exactly! Listen, Ivan, I'm sorry to cut you off, but we're in a bit of a bind. This is an official request. I'm formally calling on the special services of...

Serge X.: Forgive me, Monsieur Gustave, I never meant to betray you. They threatened my life and now they've murdered my only family.
M. Gustave: No! Who'd they kill this time?
Serge X.: My dear sister.
M. Gustave: The girl with the club foot?
Serge X.: Yes.
M. Gustave: Those fuckers!

When the destiny of a great fortune is at stake, men's greed spreads like a poison in the bloodstream. Uncles, nephews, cousins, in-laws of increasingly tenuous connection. The old woman's distant relations had come foraging out of the woodwork.

These are NOT acceptable.

There's really no point in doing anything in life because it's all over in the blink of an eye, and the next thing you know, rigor mortis sets in.

May I offer any of you inmates a plate of mush?

All of Lutz will be dressed in black... except her own ghastly, deceitful children, whom she loathed and couldn't bear to kiss hello. They'll be dancing like gypsies.

You're the first of the official death squads to whom we've been formally introduced. How do you do?

You see, there are still faint glimmers of civilization left in this barbaric slaughterhouse that was once known as humanity. Indeed that's what we provide in our own modest, humble, insignificant... oh, fuck it.

This is van Hoytl's exquisite portrayal of a beautiful boy on the cusp of manhood. Blond, smooth skin as white as that milk, of impeccable provenance. One of the last in private hands, and unquestionably the best. It's a masterpiece. The rest of this shit is worthless junk.

What is a lobby boy? A lobby boy is completely invisible, yet always in sight. A lobby boy remembers what people hate. A lobby boy anticipates the client's needs before the needs are needed. A lobby boy is, above all, discreet to a fault. Our guests know that their deepest secrets, some of which are frankly rather unseemly, will go with us to our graves. So keep your mouth shut, Zero.

M. Gustave: If this do be the end, "Farewell!" cried the wounded piper-boy...
M. Gustave: ...whilst the muskets cracked, and the yeomen roared "Hurrah", and the ramparts fell...
M. Gustave: "Methinks me breathes me last, me fears!" said he...
M. Gustave: Holy shit, you got him!

I must say, I find that girl utterly delightful. Flat as a board, enormous birthmark the shape of Mexico over half her face, sweating for hours on end in that sweltering kitchen, while Mendl, genius though he is, looms over her like a hulking gorilla. Yet without question, without fail, always and invariably, she's exceedingly lovely.

Keep your hands off my lobby boy!

You're looking so well, darling, you really are... they've done a marvelous job. I don't know what sort of cream they've put on you down at the morgue, but... I want some.

Rudeness is merely an expression of fear. People fear they won't get what they want. The most dreadful and unattractive person only needs to be loved, and they will open up like a flower.