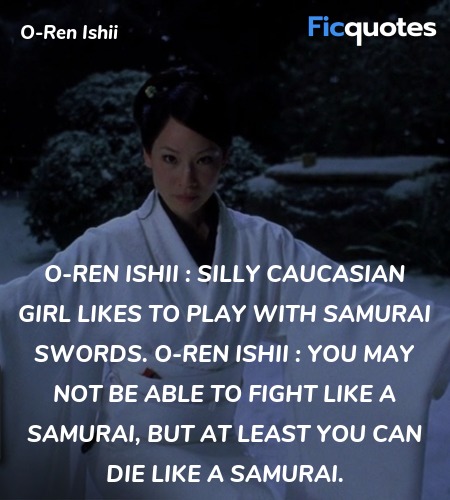 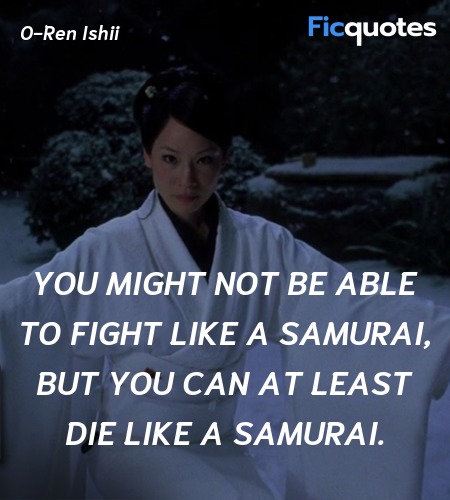 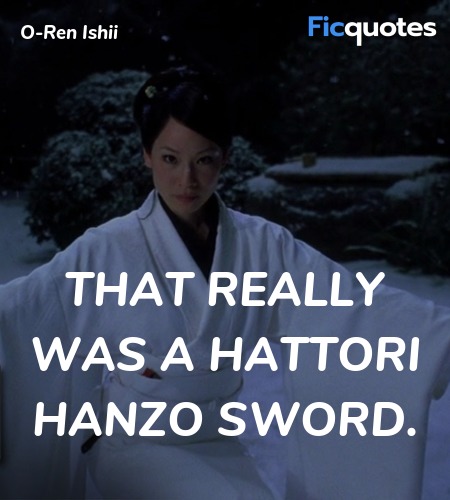 That really was a Hattori Hanzo sword.

Thought that was pretty fuckin' funny, didn't you? Word of advice, shithead - don't you ever wake up.

I might never have liked you. Point of fact, I despise you. But that doesn't suggest I don't respect you. Dying in our sleep is a luxury our kind is rarely afforded. My gift to you.

We'll have us a knife fight.

O-Ren Ishii! You and I have unfinished business!

So, O-Ren? Any more subordinates for me to kill?

My baby! My baby!

O-Ren Ishii : [after she cuts off Tanaka's head, in Japanese] So you all will know the seriousness of my warning, I shall say this in English.
O-Ren Ishii : As your leader, I encourage you from time to time, and always in a respectful manner, to question my logic. If you're unconvinced that a particular plan of action I've decided is the wisest, tell me so, but allow me to convince you and I promise you right here and now, no subject will ever be taboo. Except, of course, the subject that was just under discussion. The price you pay for bringing up either my Chinese or American heritage as a negative is... I collect your fucking head. Just like this fucker here. Now, if any of you sons of bitches got anything else to say, now's the fucking time!
O-Ren Ishii : I didn't think so.
O-Ren Ishii : Gentlemen, this meeting is adjourned.

Hard part's over. Now let's get these other piggies wiggling.

Nikki Bell : Mommy, what happened to you and the TV room?
Copperhead : Oh. That good-for-nothing dog of yours got his little ass in the living room and acted a damn fool. That's what happened.

Bill : Do you find me sadistic? You know, I bet I could fry an egg on your head right now, if I wanted to. You know, Kiddo, I'd like to believe that you're aware enough even now to know that there's nothing sadistic in my actions. Well, maybe towards those other... jokers, but not you. No Kiddo, at this moment, this is me at my most...
Bill : masochistic.
The Bride : Bill... it's your baby...

The Bride : Those of you lucky enough to have your lives, take them with you. However, leave the limbs you've lost. They belong to me now.
The Bride : Except you, Sofie! You stay right where you are!

The Bride : Then give me one of these.
Hattori Hanzo : They're not for sale.
The Bride : I didn't say "sell me", I said "give me".
Hattori Hanzo : Why should I help you?
The Bride : Because my vermin is a former student of yours. And considering the student, I'd say you have a rather large obligation.
Hattori Hanzo : You can sleep here. It will take me a month to make the sword. I suggest you spend it practicing.

As I lay in the back of Buck's truck, trying to will my limbs out of entropy, I could see the faces of the cunts that did this to me and the dicks responsible. Members all of the Deadly Viper Assassination Squad. When fortune smiles on something as violent and ugly as revenge, it seems proof like no other, that not only does God exist, you're doing His will.

The Bride : This is what you get for fucking around with Yakuzas!
The Bride : Go home to your mother!

It was not my intention to do this in front of you. For that I'm sorry. But you can take my word for it, your mother had it comin'. When you grow up, if you still feel raw about it, I'll be waiting.