Who sent you? Who are you working for?

Welcome, James. It's been a long time... and, finally, here we are. What took you so long?

If you go there, you will cross over into a place where there is no mercy... 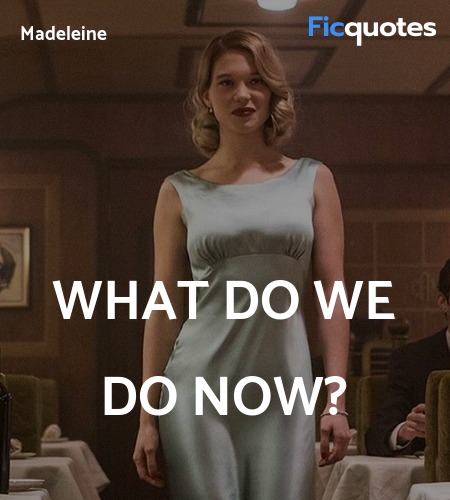 What do we do now?

The things that bring people together. Out of horror, beauty.

I've really put you through a lot, haven't I? Well, that's brothers for you: they always know which buttons to press.

Franz Oberhauser died twenty years ago, James, in an avalanche alongside his father. A man you're talking to now, a man inside your head, is Ernst Stavro Blofeld.

It was all me, James. It's always been me. The author of all your pain.

James Bond : Where is he?
Mr. White : He is everywhere. He's everywhere! He's at a bar with your friends, he's having dinner with your kids, he's in bed with your lover!

James Bond : Could you do one more thing for me?
Q : And that would be?
James Bond : Make me disappear.

Eve Moneypenny : So what's going on, James? They say that Mexico was a step too far, that you're finished.
James Bond : And what do you think?
Eve Moneypenny : I think you're just getting started.

Torture is easy, on a superficial level. A man can watch himself being disemboweled and derive great horror from the experience, but it's still going on at a distance. It isn't taking place where it is. As you know all too well, dear Madeleine, a man lives inside his head. That's where the seed of his soul is. James and I were both present recently when a man was deprived of his eyes and the most astonishing thing happened, didn't you notice? He wasn't there anymore. He had gone even though he was still alive, so this brief moment between life and death, there was nobody inside his skull. Most odd.

You see, they failed to comprehend the crucial fact that a terrible event can lead to something wonderful.

If the needle finds the correct spot in the fusiform gyrus, you recognize no one. Of course the faces of your women like to change a lot, right James? You won't know who she is. Just another passing face on your way to the grave.

James Bond : I was in a meeting recently, and your name came up.
Mr. White : I'm flattered London is still talking about me.
James Bond : It wasn't MI6... it was Rome.

James Bond : What does it do?
Q : It tells the time. Might help with your punctuality issues.
James Bond : M's idea?
Q : Precisely. Oh, one word of warning, the alarm is rather loud... if you know what I mean.
James Bond : I think I do.

We hope you enjoyed reading Spectre quotes. Browse other movie quotes on Ficquotes also. If you think we missed any quote from Spectre, please send it to us so we can expand our collection of the best Spectre quotes.