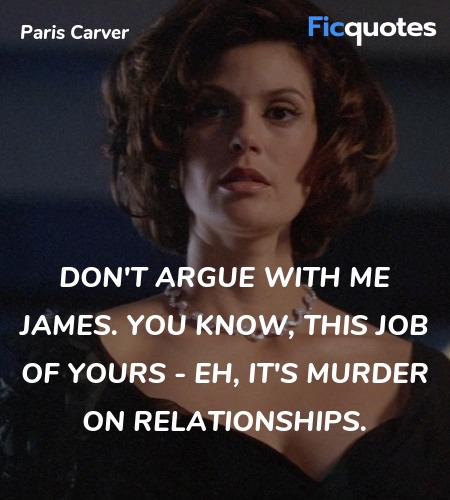 Don't argue with me James. You know, this job of yours - eh, it's murder on relationships. 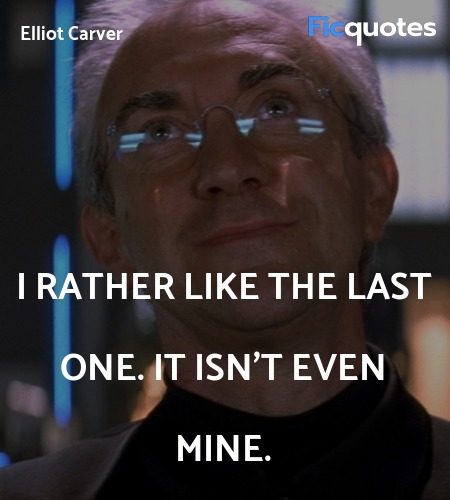 I rather like the last one. It isn't even mine. 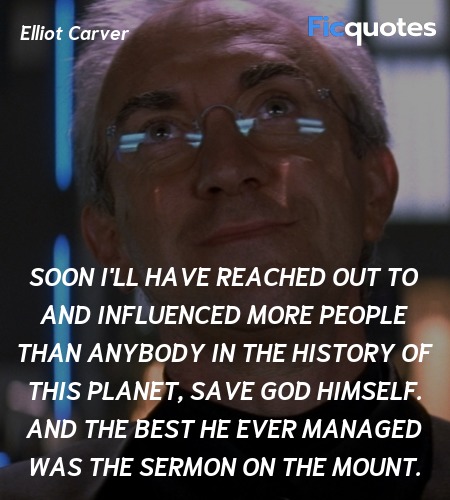 Soon I'll have reached out to and influenced more people than anybody in the history of this planet, save God himself. And the best he ever managed was the Sermon on the Mount. 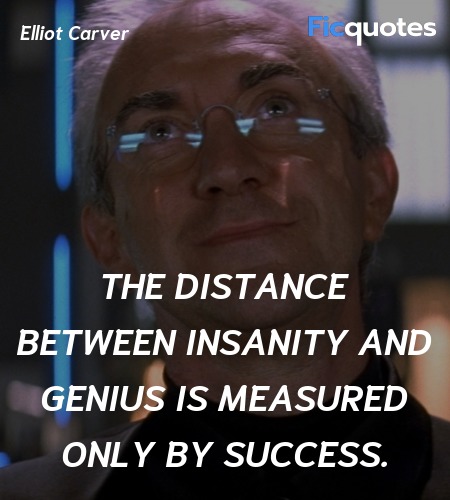 The distance between insanity and genius is measured only by success.

White Knight to White Rook, I've evacuated the area. Ask the admiral where he'd like his bombs delivered.

I never believe what I read in the press anyway.

Tell me, James: do you still sleep with a gun under your pillow?

If it comes to a choice between you and Elliot I've made my bed. You don't sleep in it anymore.

Wai-Lin : James, try the detonators! The missile will set them off.
James Bond : Never argue with a woman. They're always right.

James Bond : Are you sure you can do this on your own?
Wai-Lin : It depends whether your mission is peace or revenge.
James Bond : This is about stopping a war.

James Bond : I thought we might link up.
Wai Lin : Work hand in hand?
James Bond : Stick - closer to each other. Maybe we go after General Chang together.
Wai Lin : Your turn. Thanks for washing my hair. I work alone.

What the hell do I pay you for! If she's there, Bond is there. Stamper, find them

Wai-Lin : It's mostly dull routine, of course, but every now and then you get to sail on a beautiful evening like this. And sometimes work with a decadent agent of a corrupt Western power.
James Bond : And they say the communists don't know how to have fun.
Wai-Lin : Oh, I hate to disappoint you; but, I don't even have a little red book.

Wai Lin : Still interested in hostile takeovers?
James Bond : It's the opportunities for travel, that I like best about banking.

Wai-Lin : If I didn't know better, I'd say you were following me around, Mr. Bond.
James Bond : You have to admit, though: we seem to have developed a certain attachment to each other.
Wai-Lin : Hopefully not for long.

Wai-Lin : They're looking for us, James.
James Bond : Let's stay under cover.

Mr Stamper, would you please kill those bastards!

Ah, Miss Lin! Your countrymen are being so cooperative, so predictably eager to save face.


Words are the new weapons, satellites the new artillery.

Even if they were looking for me, we're on a stealth boat! They can't see me. Or, you. Or, even - your friend, the late Commander Bond. Who is on leave at this moment on his way to the bottom of the South China Sea. He's my new anchor man!

Fire one missile at the flagship of each fleet. The Chinese will think the British are rattling the saber. The British will think the Chinese are being belligerent. And the media will provide cool, objective coverage. - Let the mayhem begin.

When I was sixteen, I went to work for a newspaper in Hong Kong. It was a rag, but the editor taught me one important lesson. The key to a great story is not who, or what, or when, but why.

We're gonna finish this together. And if I may say so, you found the right decadent, corrupt Western agent as a partner.

I may have some breaking news for you, Elliot.

Jack Wade : You know that, officially, Uncle Sam is completely neutral in this turkey shoot.
James Bond : And unofficially?
Jack Wade : We have no interest in seeing World War III - unless we start it.

Another Carver building. If I didn't know better, I'd say he developed an edifice complex.

They'll print anything these days.

You forgot the first rule of mass media, Elliot! GIVE THE PEOPLE WHAT THEY WANT!