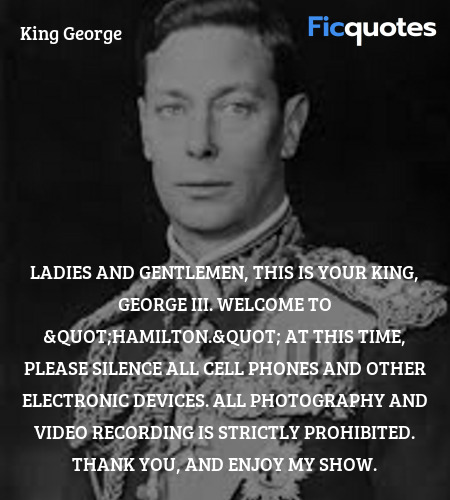 Ladies and gentlemen, this is your king, George III. Welcome to "Hamilton." At this time, please silence all cell phones and other electronic devices. All photography and video recording is strictly prohibited. Thank you, and enjoy my show. 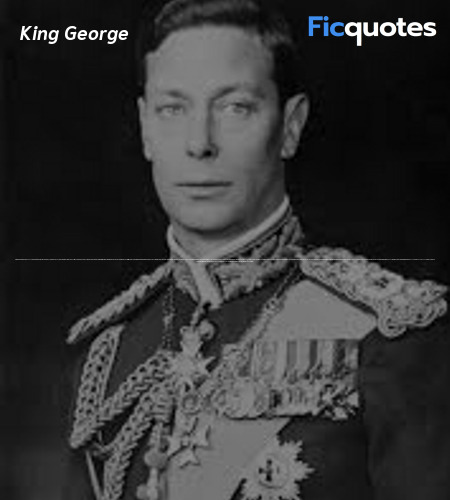 King George: They say the price of my war's not a price that they're willing to pay/Insane/You cheat with the French/Now I'm fighting with France and with Spain/I'm so blue.
King George: I thought that we made an arrangement when you went away/You were mine to subdue/Well, even despite our estrangement, I've got a small query for you/What comes next? You've been freed/Do you know how hard it is to lead?/You're on your own/Awesome, wow.
King George: Do you have a clue what happens now? Oceans rise, empires fall/It's much harder when it's all your call/All alone across the sea/When your people say they hate you/Don't come crawling back to me. 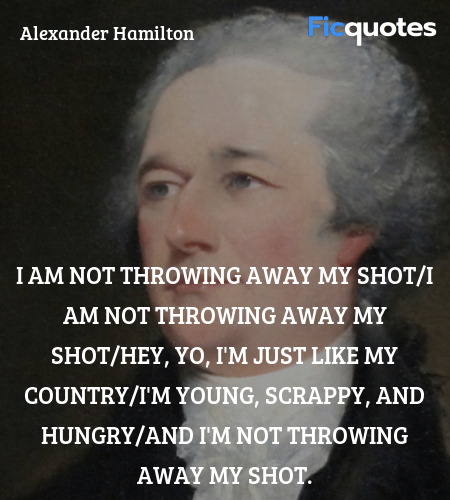 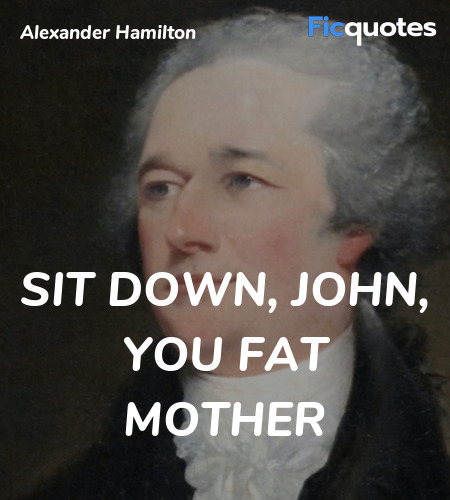 Sit down, John, you fat mother

George Washington: Let me tell you what I wish I'd known/When I was young and dreamed of glory/You have no control/Who lives? Who dies? Who tells your story?
Aaron Burr: President Jefferson.
Thomas Jefferson: I'll give him this, his financial system is a work of genius. I couldn't undo it if I tried. And I tried.
Aaron Burr: President Madison.
James Madison: He took our country from bankruptcy to prosperity. I hate to admit it, but he doesn't get enough credit for all the credit that he gave us.

Aaron Burr: The ship is in the harbor now/See if you can spot him/Another immigrant coming up from the bottom/His enemies destroyed his rep/America forgot him.
Marquis de Lafayette , Hercules Mulligan: We fought with him.
John Laurens: Me, I died for him.
George Washington: Me, I trusted him.
Peggy Schuyler , Angelica Schuyler , Eliza Hamilton: Me, I loved him.
Aaron Burr: And me/I'm the damn fool that shot him.

I dream of France without a monarchy/The unrest in France will lead to "onarchy"/Onarchy? How you say? How you... oh, anarchy!

King George: They say George Washington's yielding his power and stepping away. Is that true? I wasn't aware that was something/A person could do. I'm perplexed/Are they going to keep on replacing whoever's in charge?/If so, who's next? There's nobody else in their
King George: "country"/Who looms quite as large.
King George: What?
King George: John Adams? I know him/That can't be/That's that little guy who spoke to me/All those years ago/What was it? '85/That poor man, they're going to eat him alive/Oceans rise, empires fall/Next to Washington, they all look small/All alone/Watch them run/They will tear each other into pieces/Jesus Christ, this will be fun.
King George: President John Adams? Good luck.

Next to Washington they all look small.

I imagine death so much/It feels more like a memory/Is this where it gets me/On my feet, several feet ahead of me? I see it coming/Do I run or fire my gun or let it be?/There is no beat, no melody/Burr, my first friend, my enemy/Maybe the last face I ever see/If I throw away my shot/Is this how you remember me?/What if this bullet is my legacy?/Legacy. What is a legacy?/It's planting seeds in a garden/You never get to see/I wrote some notes/At the beginning of a song/Someone will sing for me/America, you great unfinished symphony/You sent for me/You let me make a difference/A place where even orphan immigrants can leave their fingerprints and rise up/I'm running out of time/I'm running and my time's up/Wise up, eyes up/I catch a glimpse of the other side/Laurens leads soldiers' chorus on the other side/My son is on the other side/He's with my mother on the other side/Washington is watching from the other side/Teach me how to say goodbye/Rise up. Rise up. Rise up./Eliza! My love, take your time./I'll see you on the other side.

The people are asking to hear my voice/The country is facing a difficult choice/And if you were to ask me who I'd promote/Jefferson has my vote. I have never agreed with Jefferson once/We have fought on, like, 75 different fronts/But when all is said and all is done/Jefferson has beliefs, Burr has none.

We hope you enjoyed reading Hamilton quotes. Browse other movie quotes on Ficquotes also. If you think we missed any quote from Hamilton , please send it to us so we can expand our collection of the best Hamilton quotes.