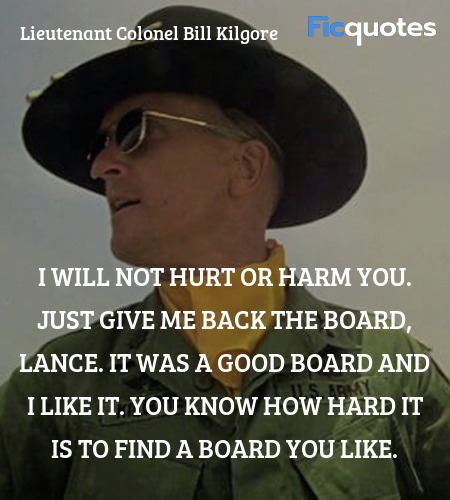 I will not hurt or harm you. Just give me back the board, Lance. It was a good board and I like it. You know how hard it is to find a board you like. 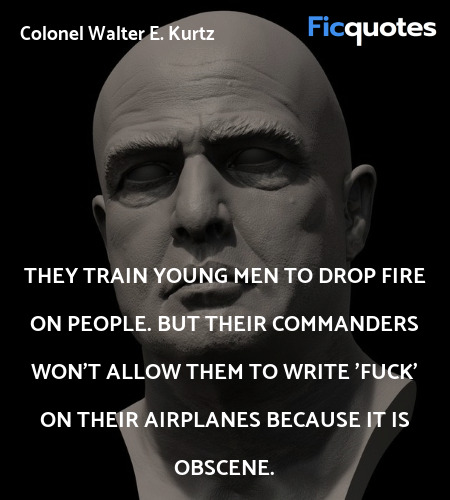 They train young men to drop fire on people. But their commanders won't allow them to write 'fuck' on their airplanes because it is obscene. 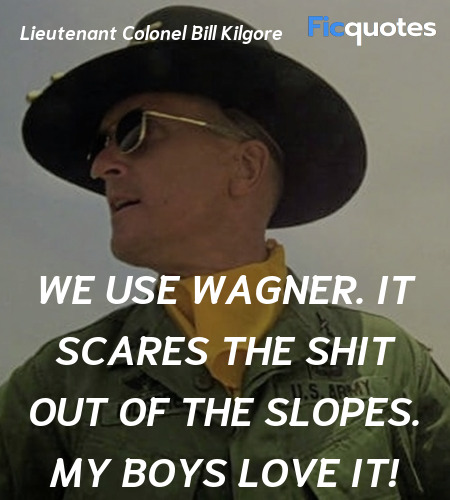 We use Wagner. It scares the shit out of the slopes. My boys love it! 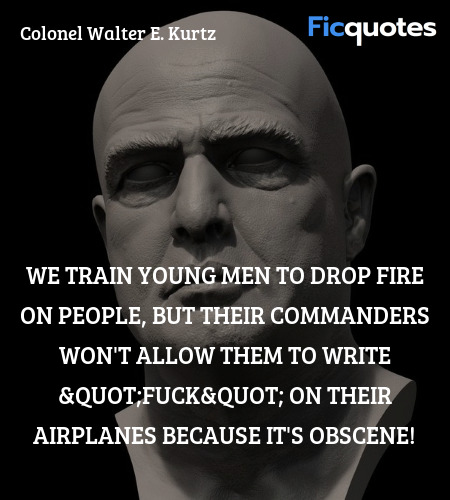 We train young men to drop fire on people, but their commanders won't allow them to write "fuck" on their airplanes because it's obscene!

Lieutenant, bomb that tree line about 100 yards back! Give me some room to breathe!

What the hell do you know about surfing, Major? You're from goddamned New Jersey!

This is a Romeo Foxtrot. Shall we dance?

Schultz, why have you forsaken me?

What do you call it when the assassins accuse the assassin? A lie. A lie and we have to be merciful.

Shultz, you need a vacation. Fresh air. A little outdoor exercise. I shall send you to a Concentration Camp.

Field Marshal Herring: We've just discovered the most wonderful, the most marvelous poisonous gas! It will kill everybody!
Adenoid Hynkel: All right, later, later, later.

Outstanding, Red Team, outstanding! Get you a case of beer for that one.

Nothing works! Not a decent pen. Not even a sharp pencil! I'm surrounded by nothing but incompetent, stupid, sterile stenographers!

We'll give him the works! We'll put on the greatest military show the world has ever known! Convinced of my strength! Napaloni will leave the invasion of Osterlich - to me.

No wonder Kurtz put a weed up Command's ass. The war was being run by a bunch of four star clowns who were gonna end up giving the whole circus away.

I've seen horrors... horrors that you've seen. But you have no right to call me a murderer. You have a right to kill me. You have a right to do that... but you have no right to judge me. It's impossible for words to describe what is necessary to those who do not know what horror means. Horror... Horror has a face... and you must make a friend of horror. Horror and moral terror are your friends. If they are not, then they are enemies to be feared. They are truly enemies! I remember when I was with Special Forces... seems a thousand centuries ago. We went into a camp to inoculate some children. We left the camp after we had inoculated the children for polio, and this old man came running after us and he was crying. He couldn't see. We went back there, and they had come and hacked off every inoculated arm. There they were in a pile. A pile of little arms. And I remember... I... I... I cried, I wept like some grandmother. I wanted to tear my teeth out; I didn't know what I wanted to do! And I want to remember it. I never want to forget it... I never want to forget. And then I realized... like I was shot... like I was shot with a diamond... a diamond bullet right through my forehead. And I thought, my God... the genius of that! The genius! The will to do that! Perfect, genuine, complete, crystalline, pure. And then I realized they were stronger than we, because they could stand that these were not monsters, these were men... trained cadres. These men who fought with their hearts, who had families, who had children, who were filled with love... but they had the strength... the strength... to do that. If I had ten divisions of those men, our troubles here would be over very quickly. You have to have men who are moral... and at the same time who are able to utilize their primordial instincts to kill without feeling... without passion... without judgment... without judgment! Because it's judgment that defeats us.

Have you ever considered any real freedoms? Freedoms from the opinion of others... even the opinions of yourself?

I worry that my son might not understand what I've tried to be. And if I were to be killed, Willard, I would want someone to go to my home and tell my son everything. Everything I did, everything you saw, because there's nothing that I detest more than the stench of lies. And if you understand me, Willard, you will do this for me.

As long as cold beer, hot food, rock 'n' roll, and all the other amenities remain expected norm, our conduct of the war will only gain impotence.We must kill them. We must incinerate them. Pig after pig... cow after cow... village after village... army after army...

Willard: Saigon... shit; I'm still only in Saigon... Every time I think I'm gonna wake up back in the jungle.
Willard: When I was home after my first tour, it was worse.
Willard: I'd wake up and there'd be nothing. I hardly said a word to my wife, until I said "yes" to a divorce. When I was here, I wanted to be there; when I was there, all I could think of was getting back into the jungle. I'm here a week now... waiting for a mission... getting softer. Every minute I stay in this room, I get weaker, and every minute Charlie squats in the bush, he gets stronger. Each time I looked around the walls moved in a little tighter.

I was going to the worst place in the world and I didn't even know it yet. Weeks away and hundreds of miles up a river that snaked through the war like a main circuit cable plugged straight into Kurtz. It was no accident that I got to be the caretaker of Colonel Walter E. Kurtz's memory any more than being back in Saigon was an accident. There is no way to tell his story without telling my own. And if his story really is a confession, then so is mine.

You can either surf, or you can fight!

Everyone gets everything he wants. I wanted a mission, and for my sins, they gave me one. Brought it up to me like room service. It was a real choice mission, and when it was over, I never wanted another.

Oh man... the bullshit piled up so fast in Vietnam, you needed wings to stay above it.

How many people had I already killed? There were those six that I knew about for sure. Close enough to blow their last breath in my face. But this time, it was an American and an officer. That wasn't supposed to make any difference to me, but it did. Shit... charging a man with murder in this place was like handing out speeding tickets in the Indy 500. I took the mission. What the hell else was I gonna do?

If that's how Kilgore fought the war, I began to wonder what they really had against Kurtz. It wasn't just insanity and murder; there was enough of that to go around for everyone.

As for the charges against me, I am unconcerned. I am beyond their timid lying morality, and so I am beyond caring.

It's a way we had over here for living with ourselves. We cut 'em in half with a machine gun and give 'em a Band-Aid. It was a lie. And the more I saw them, the more I hated lies.

Well, he wasn't a bad officer, I guess. He loved his boys, and he felt safe with 'em. He was just one of those guys with that weird light around him. He just knew he wasn't gonna get so much as a scratch here.