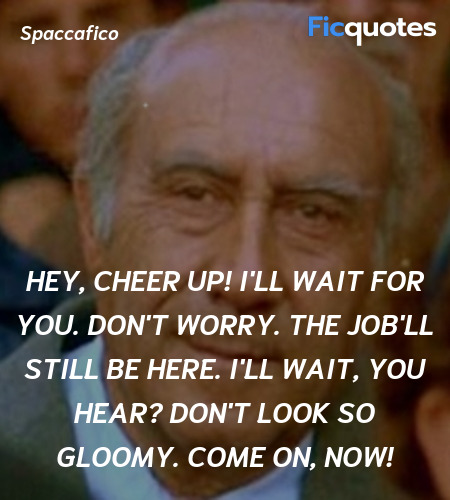 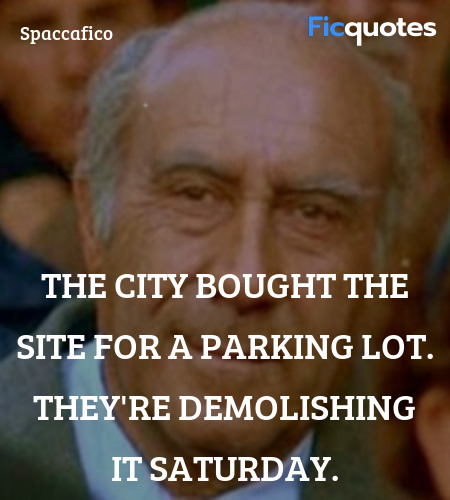 The city bought the site for a parking lot. They're demolishing it Saturday. 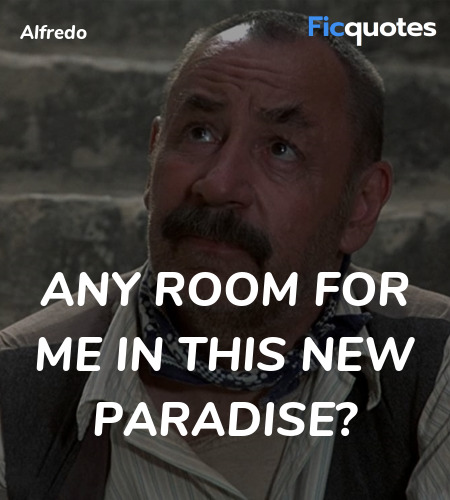 Any room for me in this new paradise? 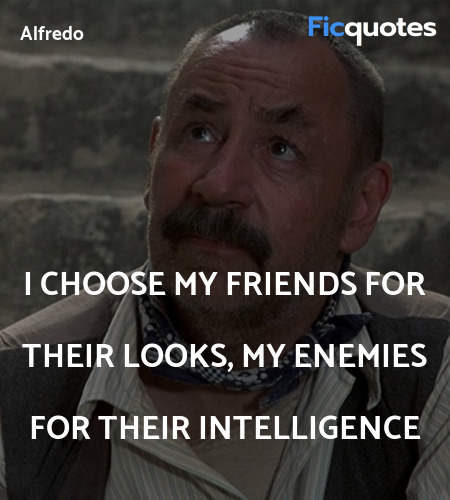 I choose my friends for their looks, my enemies for their intelligence

This film is too highbrow for us. One day is more than enough. Load the reels for tomorrow.

That's probably how it was meant to be. Each of us has his own destiny.

With all due respect to the Lord, who made the world in two or three days - I'd have taken a bit longer; but, in all modesty, I would've done it better.

Alfredo: The bigger the man, the deeper the footprint. And if he loves, he suffers, knowing it's a dead-end street.
Salvatore: That's nice, what you just said. But sad.
Alfredo: I didn't say it. It was John Wayne in "The Shepard of the Hills."
Salvatore: You old pirate!

Salvatore: They tell me you never go out and you never talk to anybody. Why?
Alfredo: You know how it is. Sooner or later a time comes when it's all the same whether you talk or not. So you might as well shut up.

At a party, a lieutenant pinches this girl's ass. She turns around. It's the colonel's daughter. Terrified, the lieutenant says, "If your heart is as hard as what I just felt, I'm a dead man."

When will this rotten summer end? In a film, it'd already be over. Fade-out, cut to a storm. Wouldn't that be great?

Out of the fire of love come ashes. Even the greatest love eventually fizzles out.

Alfredo: What's she like?
Salvatore: She's very nice. My age, slim, long brown hair. Big blue eyes, honest and direct. A little beauty mark on her lip. Very small. You only see it up close. When she smiles, you feel like - I don't know.
Alfredo: Love. Love. I know how it is. The blue-eyed ones are the worst. No matter what you do, they'll never be your friends. There's nothing you can do.

And the next time be careful how you talk. Not to take credit away from the Lord, but if I had created the world, in all modesty, certain things would have come out better. But unfortunately such was not the case.

Alfredo: Once upon a time, a king gave a feast. And there came the most beautiful princesses of the realm. Now, a soldier, who was standing guard, saw the king's daughter go by. She was the most beautiful one, and he immediately fell in love with her. But what could a poor soldier do when it came to the daughter of the king? Well, finally, one day, he managed to meet her, and he told her that he could no longer live without her. The princess was so impressed by his strong feelings that she said to the soldier: "If you can wait 100 days and 100 nights under my balcony, then at the end of it, I shall be yours." Damn! The soldier immediately went there and waited one day. And two days. And ten. And then twenty. And every evening, the princess looked out of her window, but he never moved. During rain, during wind, during snow, he was always there. The bird shat on his head, and the bees stung him, but he didn't budge. After ninety nights, he had become all dried up, all white, and the tears streamed from his eyes. He couldn't hold them back. He no longer had the strength to sleep. All that time, the princess watched him. And on the 99th night, the soldier stood up, took his chair, and went away.
Salvatore: ... In one more night, the princess would have been his. But she also could not possibly have kept her promise. And it would have been terrible. He would have died. This way, however, at least for 99 days, he was living under the illusion that she was there, waiting for him.

Well, what do you say? Shall we let the poor devils see their film?

Alfredo: Get out of here! Go back to Rome. You're young and the world is yours. I'm old. I don't want to hear you talk anymore. I want to hear others talking about you. Don't come back. Don't think about us. Don't look back. Don't write. Don't give in to nostalgia. Forget us all. If you do and you come back, don't come see me. I won't let you in my house. Understand?
Salvatore: Thank you. For everything you've done for me.
Alfredo: Whatever you end up doing, love it. The way you loved the projection booth when you were a little squirt.

"A mob doesn't think. They don't know what they're doing." Spencer Tracy said that in "Fury."

Alfredo: Living here day by day, you think it's the center of the world. You believe nothing will ever change. Then you leave: a year, two years. When you come back, everything's changed. The thread's broken. What you came to find isn't there. What was yours is gone. You have to go away for a long time... many years... before you can come back and find your people. The land where you were born. But now, no. It's not possible. Right now you're blinder than I am.
Salvatore: Who said that? Gary Cooper? James Stewart? Henry Fonda? Eh?
Alfredo: No, Toto. Nobody said it. This time it's all me. Life isn't like in the movies. Life... is much harder.