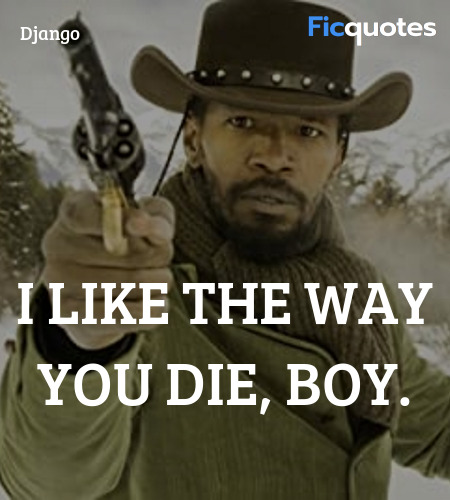 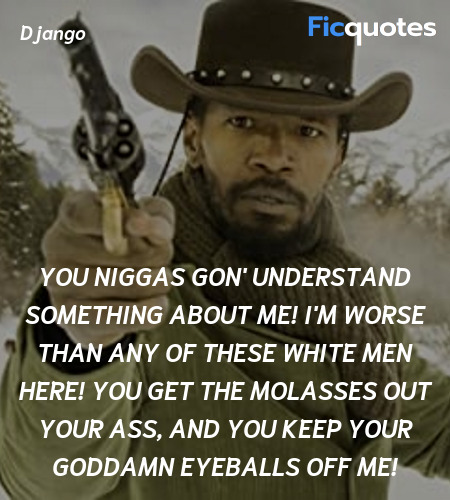 You niggas gon' understand something about me! I'm worse than any of these white men here! You get the molasses out your ass, and you keep your goddamn eyeballs off me!

Stephen: You leaving. This here is what you take with you.
Stephen: Your black ass is what all them motherfuckers at the Big House could talk about for the last few hours. Seem like white folk ain't never had a bright idea in they life was coming up with all kinds of ways to kill your ass. Now, mind you, most of them ideas had to do with fucking with your fun parts. Now, that may seem like a good idea, but the truth is, when you snip a nigga's nuts, most of them bleed out in, oh, about... seven minutes. Most of them.
Stephen: Well, more than most. Then I says, "Shitfire! The niggas we sell to LeQuint Dickey got it worse than that!" And they say, "Let's whip him to death!", or "Throw him to the Mandingos. Feed him to Stonesipher's dogs." And I said, "What's so special about that? We do that shit all the time! Hell's bells, the niggas we sell to LeQuint Dickey got it worse than that!" Lo and behold, out of nowhere, Miss Laura come up with the bright idea of giving your ass to the LeQuint Dickey Mining Company!
Stephen: And as a slave of the LeQuint Dickey Mining Company, henceforth until the day you die, all day, every day, you will be swingin' a sledgehammer, turnin' big rocks into little rocks. Now, when you get there, they gonna take away your name, give you a number and a sledgehammer, and say, "Get to work!" One word of sass, they cut out your tongue. And they good at it, too. You won't bleed out. Oh, they does that real good! They gonna work ya all day, every day 'till your back give out. Then, they're gonna hit you in the head with a hammer, throw your ass down the nigger hole.
Stephen: And THAT will be the story of you, Django! 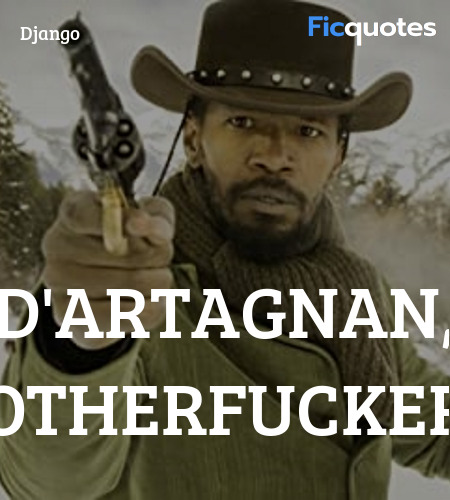 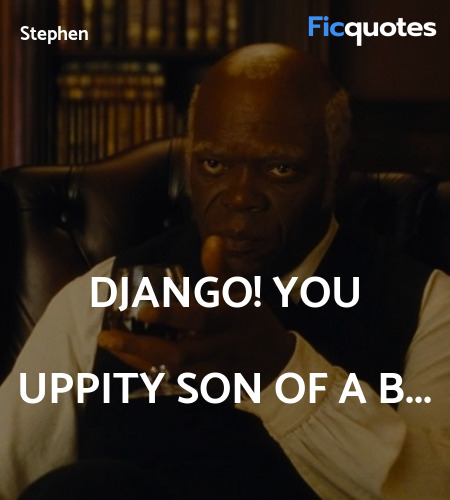 Django, and his friend in gray here, Dr. Schultz, are customers. And they are our guests, Stephen, and you, you old decrepit bastard are to show them every hospitality. You understand that?

Everybody stop antagonizing my guest.

Come on over. We got us a fight going on that's a good bit of fun.

Calvin Candie: I've heard tell about you. I heard you been telling everybody them mandingos ain't no damn good, ain't nothing nobody is selling is worth buying - I'm curious. What makes you such a mandingo expert?
Django: I'm curious what makes you so curious.

He is a rambunctious sort, ain't he?

Do you know what they're going to call you? The "Fastest Gun in the South".

Our mutual friend has a flair for the dramatic.

You silver tongued devil, you.

Dr. King Schultz: How do you like the bounty hunting business?
Django: Kill white people and get paid for it? What's not to like?

Let's get out of here.