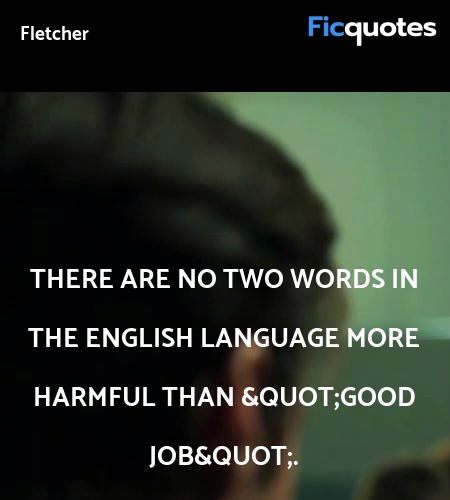 There are no two words in the English language more harmful than "good job". 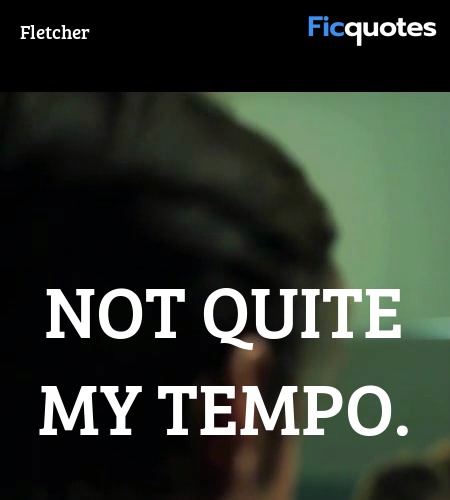 Not quite my tempo. 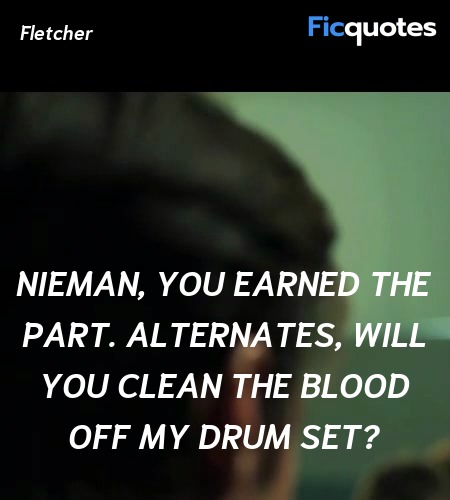 Nieman, you earned the part. Alternates, will you clean the blood off my drum set? 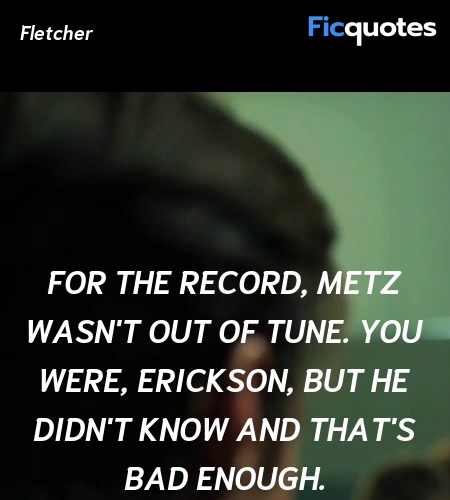 For the record, Metz wasn't out of tune. You were, Erickson, but he didn't know and that's bad enough.

If you want the fucking part, earn it!

The folder is your fucking responsibility, Tanner. Why would you give it to Neiman? Right? You give a calculator to a fucking retard he's gonna try to turn on a TV with it. Now get your sticks and get your ass on stage.

Are you serious? That shit?

I was there to push people beyond what's expected of them. I believe that's an absolute necessity.

Motherfucker! Connelly, get your ass back on the kit.

Andrew : I'm just gonna lay it out there. This is why I don't think we should be together. And I've thought about it a lot and this is what's gonna happen. I'm gonna keep pursuing what I'm pursuing. And because I'm doing that, it's gonna take up more and more of my time. And I'm not gonna be able to spend as much time with you. And when I do spend time with you, I'm gonna be thinking about drumming. And I'm gonna be thinking about jazz music, my charts, all that. And because of that, you're gonna start to resent me. And you're gonna tell me to ease up on the drumming, spend more time with you because you're not feeling important. And I'm not gonna be able to do that. And really, I'm gonna start to resent you for even asking me to stop drumming. And we're just gonna start to hate each other. And it's gonna get very... It's gonna be ugly. And so for those reasons, I'd rather just, you know, break it off clean... because I wanna be great.
Nicole : And you're not?
Andrew : I wanna be one of the greats.
Nicole : And I would stop you from doing that?
Andrew : Yeah.
Nicole : You know I would stop you from doing that. You know, for a fact?
Andrew : Yes.
Nicole : And I'd barely see you anyway?
Andrew : Yeah.
Nicole : And when I do see you, you'd treat me like shit because I'm just some girl who doesn't know what she wants. And you have a path, and you're gonna be great, and I'm going to be forgotten, and therefore you won't be able to give me the time of day because you have bigger things to pursue?
Andrew : That's exactly my point.
Nicole : What the fuck is wrong with you? You're right, we should not be dating.

Andrew, what are you doing, man?

Oh my dear God. Are you one of those single tear people? Do I look like a double fucking rainbow to you?

Now this one really upsets me. We have an out-of-tune player here. Before I continue, would that player care to identify himself? No? Ok, maybe a bug flew in my ear.

Five-P.M. call tomorrow in Dunellen. Give yourself at least two hours to get there this time, alright? Save your travel receipts. Or don't. I don't give a shit.

Tanner, are you a fucking statue? Let's go! Get off the stool.

The truth is, Andrew, I... never really had a Charlie Parker. But I tried. I actually fucking tried. And that's more than most people ever do. And I will never apologise for how I tried.

Uncle Frank : You got any friends, Andy?
Andrew : No.
Uncle Frank : Oh, why's that?
Andrew : I don't know, I just never really saw the use.
Uncle Frank : Well, who are you going to play with otherwise? Lennon and McCartney, they were school buddies, am I right?
Andrew : Charlie Parker didn't know anybody 'til Jo Jones threw a cymbal at his head.
Uncle Frank : So that's your idea of success, huh?
Andrew : I think being the greatest musician of the 20th century is anybody's idea of success.
Jim : Dying broke and drunk and full of heroin at the age of 34 is not exactly my idea of success.
Andrew : I'd rather die drunk, broke at 34 and have people at a dinner table talk about me than live to be rich and sober at 90 and nobody remembered who I was.
Uncle Frank : Ah, but your friends will remember you, that's the point.
Andrew : None of us were friends with Charlie Parker. *That's* the point.
Uncle Frank : Travis and Dustin? They have plenty of friends and plenty of purpose.
Andrew : I'm sure they'll make great school board presidents someday.
Dustin : Oh, that's what this is all about? You think you're better than us?
Andrew : You catch on quick. Are you in Model UN?
Travis : I got a reply for you, Andrew. You think Carleton football's a joke? Come play with us.
Andrew : Four words you will never hear from the NFL.
Aunt Emma : Who wants dessert?

We have a squeaker today, class. His name is Andrew Nieman, he's 19 years old. Isn't he cute?

So, imagine if Jones had just said, "Well, that's okay, Charlie. That was all right. Good job." So Charlie thinks to himself, "Well, shit, I did do a pretty good job." End of story. No Bird. That to me is an absolute tragedy. But that's just what the world wants now. People wonder why jazz is dying.

Is that all you have you worthless Hymie fuck? No wonder mommy ran out on you.

Everybody remember, Lincoln Center and its ilk use these competitions to decide who they are interested in and who they are not. And I am not gonna have my reputation in that department tarnished by a bunch of fucking limp-dick, sour-note, flatter-than-their-girlfriends, flexible-tempo dipshits. Got it?

If you deliberately sabotage my band, I will fuck you like a pig.

Get the fuck off my sight before I'll demolish you!

Either you're deliberately out of tune and sabotaging my band, or you don't know you're out of tune, and that's even worse.


I never really had a Charlie Parker. But I tried. I actually fucking tried. And that's more than most people ever do.

You think I'm fucking stupid? I know it was you.

That is not your boyfriend's dick. Do not come early.

And here comes mister gay pride of the Upper West Side himself. Unfortunately, this is not a Bette Midler concert, we will not be serving Cosmopolitans and Baked Alaska, so just play faster than you give fucking hand jobs, will you please?

I can still fucking see you, Mini Me!