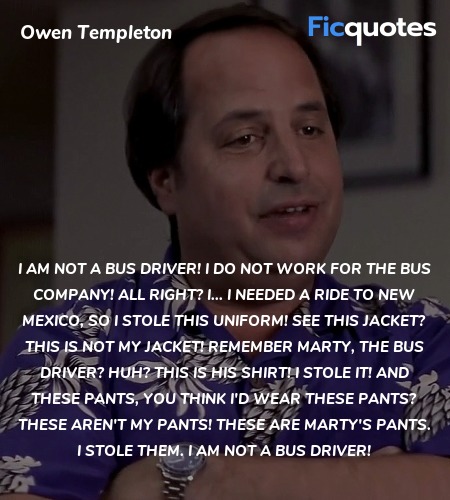 Lucy Impersonator : How about a pit-stop?
Owen Templeton : Sorry, this is a one way flight. There's a bathroom in the back.
Lucy : The latch is broken. Anyone could just walk right in.
Owen Templeton : So? Look, you ain't got nothin' these other Lucys haven't seen before.
Lucy : Not necessarily.

Gus the Cabbie : Confederate... confederate... THROW THE BALL! That's why you're not going to get drafted! You'll be lucky to play arena football in Barcelona!
Gus the Cabbie : You like football?
Owen Templeton : Sure.
Gus the Cabbie : Did you happen to catch that, uh, Dallas game last week? You can't really call it a game, it was more of an obscenity, a crime against football. I lost twenty grand on that game! And they would have won! Now I gotta work TWO shifts because of that idiot! I mean, Stevie Wonder coulda done a better job callin' that game.

We hope you enjoyed reading Rat Race quotes. Browse other movie quotes on Ficquotes also. If you think we missed any quote from Rat Race, please send it to us so we can expand our collection of the best Rat Race quotes.