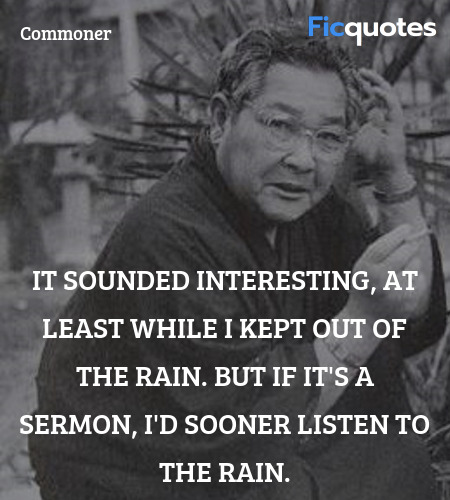 It sounded interesting, at least while I kept out of the rain. But if it's a sermon, I'd sooner listen to the rain. 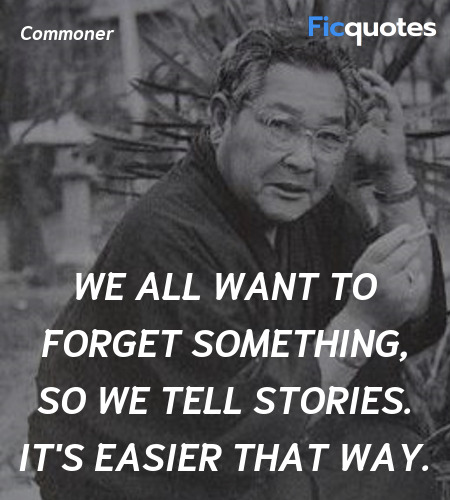 We all want to forget something, so we tell stories. It's easier that way. 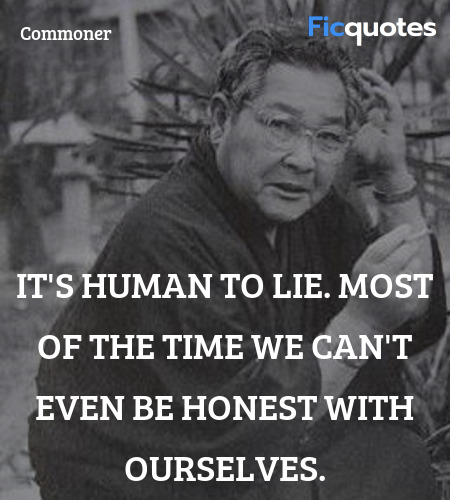 It's human to lie. Most of the time we can't even be honest with ourselves. 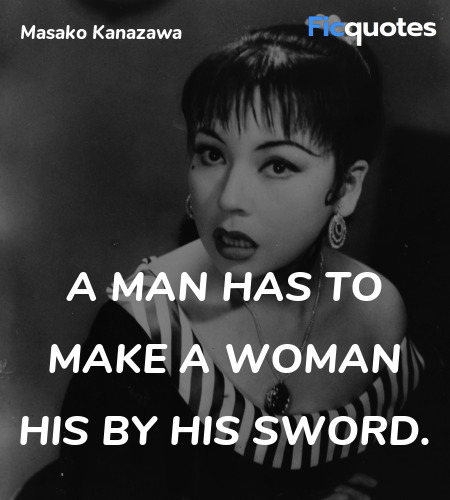 A man has to make a woman his by his sword.

A human life is truly as frail and fleeting as the morning dew.

Wherever. Take me wherever you want.

What should a poor, helpless woman like me do?

War, earthquake, winds, fire, famine, the plague. Year after year, it's been nothing but disasters. And bandits descend upon us every night. I've seen so many men getting killed like insects, but even I have never heard a story as horrible as this. Yes. So horrible. This time, I may finally lose my faith in the human soul. It's worse than worse than bandits, the plague, famine, fire or wars.

Women use their tears to fool everyone. They even fool themselves.

No one tells a lie after he's said he's going to tell one.

I'm the one who should be ashamed. I don't understand my own soul.

I saw the couple three days ago. It was a hot afternoon. Suddenly a cool breeze rustle the leaves. If it hadn't been for that wind, I wouldn't have killed him.

A woman loves a man who loves passionately.

Wait! Stop! Either you die or my husband dies. One of you must die. To have my shame known to two men is worse than dying. I will go with the survivor.

Here, take it. Look at it. Near here I found this old tomb with things like this in it. I broke it open and inside I found swords, daggers, mirrors... I buried them all here in the woods and no one but me knows where. But if you're interested I might sell some of them to you cheap.

I thought I saw a goddess. At that moment I decided to have her, even if I had to kill her man. But if I could have her without killing, all the better.

I already had you, but I only want you more. It's very hard. I beg you to be my wife.

I had never seen such fierceness in a woman.

She became very pale and stared at me as though her eyes were frozen. She looked like a child when it turns suddenly serious. The sight of her made me jealous of that man. I started to hate him. I wanted to show her what he looked like, all tied up like that. I hadn't even thought of a thing like that before, but now I did.

We hope you enjoyed reading Rashomon quotes. Browse other movie quotes on Ficquotes also. If you think we missed any quote from Rashomon, please send it to us so we can expand our collection of the best Rashomon quotes.