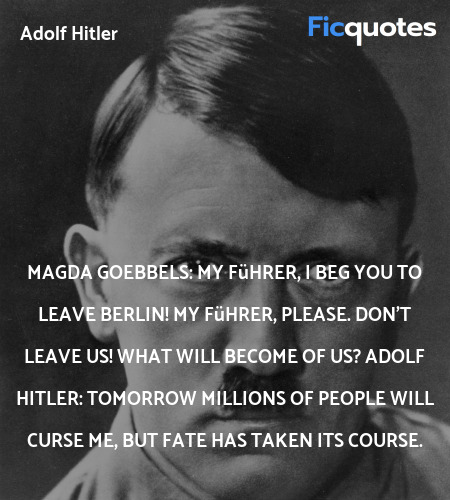 Magda Goebbels: My Führer, I beg you to leave Berlin! My Führer, please. Don't leave us! What will become of us?
Adolf Hitler: Tomorrow millions of people will curse me, but fate has taken its course.

Adolf Hitler: That was an order! Steiner's assault was an order! Who do you think you are to dare disobey an order I give? So this is what it has come to! The military has been lying to me. Everybody has been lying to me, even the SS! Our generals are just a bunch of contemptible, disloyal cowards.
General der Infanterie Wilhelm Burgdorf: I can't permit you to insult the soldiers.
Adolf Hitler: They are cowards, traitors and failures!
General der Infanterie Wilhelm Burgdorf: My fuhrer, this is outrageous!
Adolf Hitler: Our generals are the scum of the German people! Not a shred of honour! They call themselves generals. Years at military academy just to learn how to hold a knife and fork! For years, the military has hindered my plans! They've put every kind of obstacle in my way! What I should have done... was liquidate all the high-ranking officers, as Stalin did!

In a war as such there are no civilians. 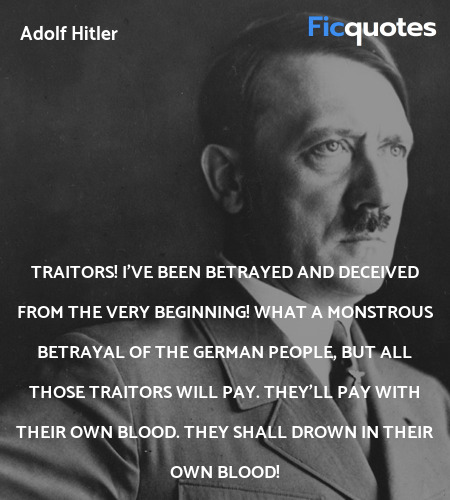 Traitors! I've been betrayed and deceived from the very beginning! What a monstrous betrayal of the German people, but all those traitors will pay. They'll pay with their own blood. They shall drown in their own blood!

The war is lost... But if you think that I'll leave Berlin for that, you are sadly mistaken. I'd prefer to put a bullet in my head. 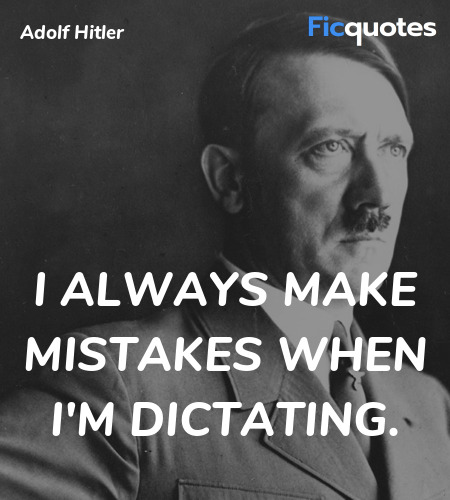 Adolf Hitler: General von Greim, I appoint you to Commander in Chief of the Air Force and General Field Marshal. A large responsibility rests on your shoulders. You must shake up the entire air force. Many mistakes have been made, so be ruthless. Life never forgives weakness. This so called humanity... is just priests' drivel. Compassion is a primal sin. Compassion for the weak is a betrayal of nature.
Joseph Goebbels: The strongest can only be victorious by eradicating the weak.
Adolf Hitler: I have always obeyed this law of nature by never permitting myself to feel compassion. I have ruthlessly suppressed domestic opposition and brutally crushed the resistance of alien races. It's the only way to deal with it.
Adolf Hitler: Apes, for example, trample every outsider to death. What goes for apes goes even more for human beings.
Adolf Hitler: Himmler, in Lübeck, has made an offer to surrender to the western powers through Count Bernadotte... according to a report by English radio.
Adolf Hitler: Himmler... Of all people, Himmler! The truest of the true... This is the worst betrayal of all! Göring, yeah; he was always corrupt, of course. Speer, yeah: an idealistic, unpredictable artist. All the others, yeah yeah yeah yeah yeah!
Adolf Hitler: But not Himmler. Has he gone crazy?
Adolf Hitler: He claimed authority by saying I was sick, perhaps already dead!
Adolf Hitler: Please leave me alone with Lord von Greim and Frau Reitsch.
Adolf Hitler: Oh, and bring me Fegelein.
Heinz Linge, Kammerdiener: My Führer, we don't know where he is.
Adolf Hitler: But he's Himmler's adjutant. He must be here.
General der Infanterie Wilhelm Burgdorf: We haven't seen him for days.
Adolf Hitler: I want his report at once!
Adolf Hitler: Please stay, Doctor.

I won't use my final hours as Reich Chancellor to sign a statement of surrender!

We hope you enjoyed reading Downfall quotes. Browse other movie quotes on Ficquotes also. If you think we missed any quote from Downfall, please send it to us so we can expand our collection of the best Downfall quotes.