Best How to Train Your Dragon (2010) Movie Quotes 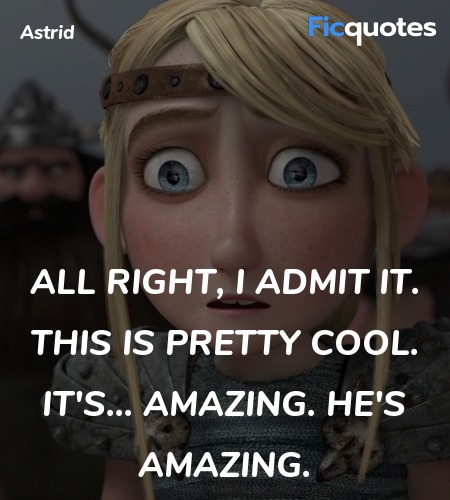 All right, I admit it. This is pretty cool. It's... amazing. He's amazing. 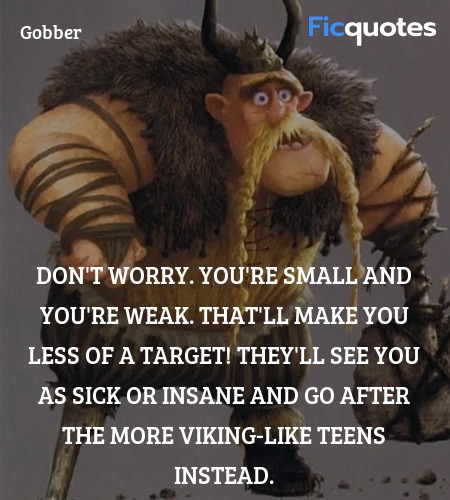 Don't worry. You're small and you're weak. That'll make you less of a target! They'll see you as sick or insane and go after the more viking-like teens instead. 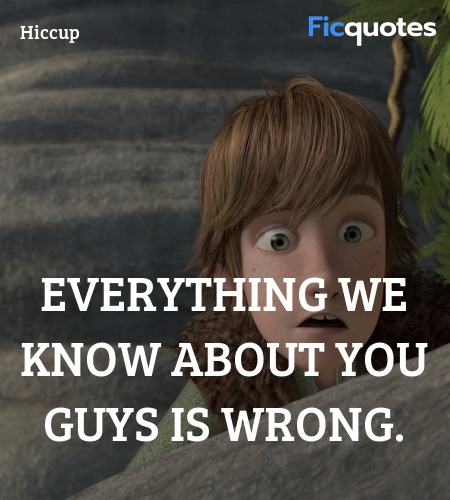 Everything we know about you guys is wrong. 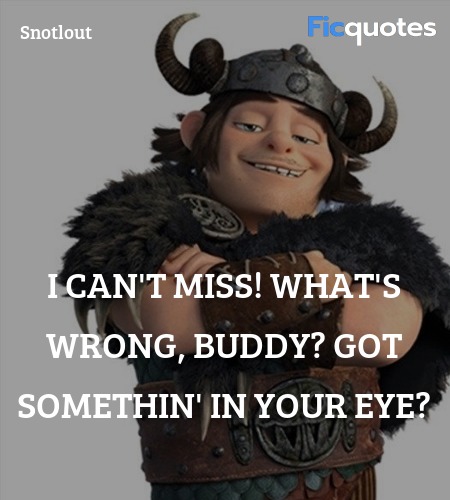 I can't miss! What's wrong, buddy? Got somethin' in your eye?

Oh, it's satisfying to know that all of our food has been dumped down a hole.

Most people would leave. Not us. We're Vikings. We... have stubbornness issues.

Gobber : Look for its blind spot! Every dragon has one. Find it, hide in it, and strike!
Ruffnut : Whoa! Do you ever bathe?
Tuffnut : You don't like it, then just get your own blind spot!
Ruffnut : How about I give you one...!
Gobber : Blind spot, yes. Deaf spot... Not so much.

This is Berk. It snows nine months of the year, and hails the other three. Any food that grows here is tough and tasteless. The people that grow here are even more so. The only upsides are the pets. While other places have ponies or parrots... we have... dragons.

Snotlout : If that dragon shows either of its faces, I'm gonna... there!
Ruffnut , Astrid : AH!
Ruffnut : Hey! It's us, idiots!
Tuffnut : Your butts are getting bigger! We thought you were a dragon!
Snotlout : Not that there's anything wrong with a dragon-esque fig...

Snotlout : Watch out babe, I'll take care of this.
Snotlout : The sun was in my eyes, Astrid! What do you want me to do, block out the sun? I can do that, but I don't have the time right now!

Astrid : Is this some kind of a joke to you? Our parents war is about to become ours.
Astrid : Figure which side your on.

Hiccup : This is Berk. It's twelve days north of Hopeless and a few degrees south of Freezing to Death. It's located solidly on the Meridian of Misery. My village. In a word? Sturdy. It's been here for seven generations, but every single building is new. We have fishing, hunting, and a charming view of the sunsets. The only problems are the pests. You see, most places have mice or mosquitoes... We have...
Hiccup : Dragons!

Oh, the gods hate me. Some people lose their knife or their mug... No, not me, I manage to lose an entire dragon?

Stoick : Well, I can show my face in public again! If someone told me that in a few short weeks, Hiccup would go from, well, being, uh... Hiccup, to placing first in dragon training? Well, I would have tied him to a mast and shipped him off, for fear he'd gone mad!
Stoick : And you know it! But, here we are. And no one's more surprised... or more proud, than I am. Today, my boy becomes a Viking. Today, he becomes one of us!

Stoick : Your mother would have wanted you to have it. It's half of her breastplate.
Stoick : Matching set. Keeps her... keeps her close, you know.

Hiccup : Alright! Get Back! Now you've done it! Back,I say... Get back into your cage!
Hiccup : Think about what you've done.

Thanks for stopping by and for the, uh, the breast-hat...