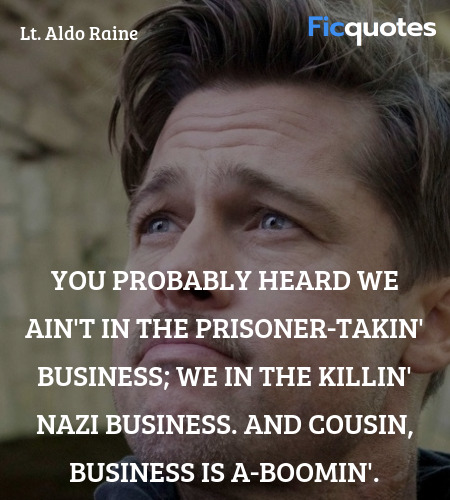 You probably heard we ain't in the prisoner-takin' business; we in the killin' Nazi business. And cousin, business is a-boomin'. 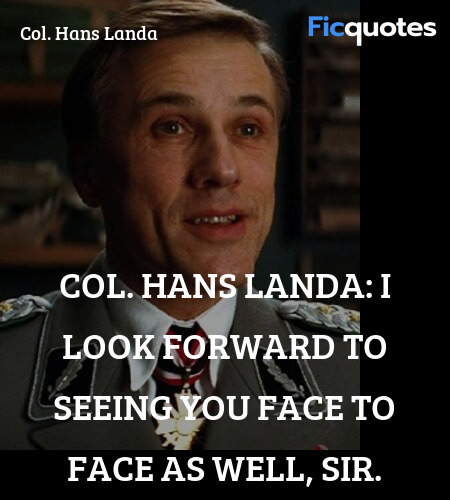 Col. Hans Landa: I look forward to seeing you face to face as well, sir. 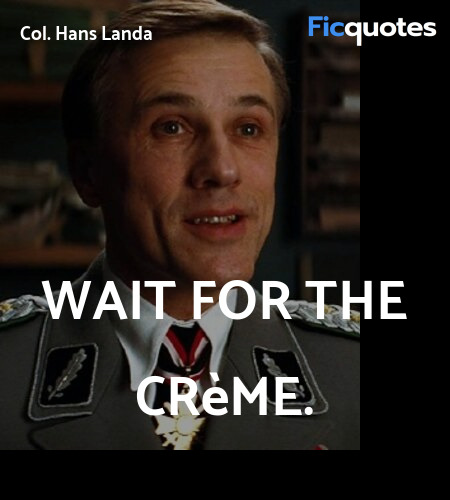 Wait for the crème. 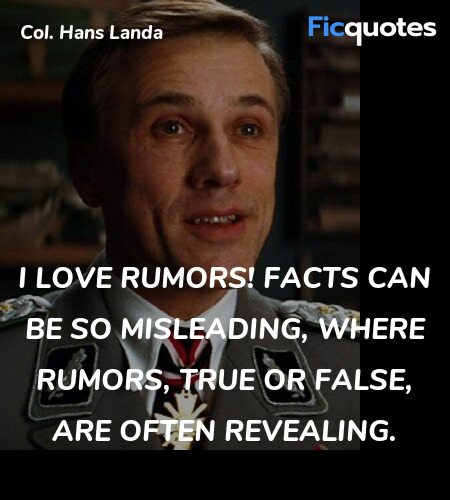 I love rumors! Facts can be so misleading, where rumors, true or false, are often revealing.

My name is Shosanna Dreyfus and THIS is the face... of Jewish vengeance!

Bring that fucker over here!

If you are so desperate for a French girlfriend, I suggest you try Vichy.

You either do what the fuck we tell you, or I'll bury this axe in your collaborating skull.

Bridget von Hammersmark: I can see since you didn't see what happened inside, the Nazis being there must look odd.
Lt. Aldo Raine: Yeah, we got a word for that kinda odd in English. It's called suspicious.

Sgt. Donny Donowitz: [Aldo is carving a swastika into Private Butz's forehead] You know, Lieutenant, you're getting pretty good at that.
Lt. Aldo Raine: You know how you get to Carnegie Hall, don't ya? Practice.

I did have something else I wanted to ask you, but right now, for the life of me, I can't remember what it is. Oh, well, must not have been important. Till tonight.

Monsieur LaPadite, to both your family and your cows I say: Bravo.

What a tremendously hostile world that a rat must endure. Yet not only does he survive, he thrives. Because our little foe has an instinct for survival and preservation second to none... And that, Monsieur, is what a Jew shares with a rat.

Col. Hans Landa: So when the military history of this night is written, it will be recorded that I was part of Operation Kino from the very beginning as a double agent. Anything I've done in my guise as an SS Colonel was sanctioned by the OSS as a necessary evil to establish my cover with the Germans and it was my placement of Lieutenant Raine's dynamite in Hitler and Goebbels' opera box that assured their demise. By the way, that last part's actually true. I want my full military pension and benefits under my proper rank. I want to receive the Congressional Medal of Honor for my invaluable assistance in the toppling of the Third Reich. In fact, I want all the members of Operation Kino to receive the Congressional Medal of Honor. Full citizenship for myself - Well, that goes without saying. And I would like the United States of America to purchase property for me on Nantucket Island as a reward for all the countless lives I've saved by bringing the tyranny of the National Socialist party to a swifter-than-imagined end. Do you have all that, sir?