Directed by: Billy Wilder
Written by: Charles Brackett, Billy Wilder
Starring: William Holden, Gloria Swanson, Erich von Stroheim
Released on: September 29, 1950
Taglines: This is it .. the most compelling dramatic story ever unfolded on the screen .. a tale of heartache and tragedy ..love and ambition .. told against the fabulous background of Hollywood. 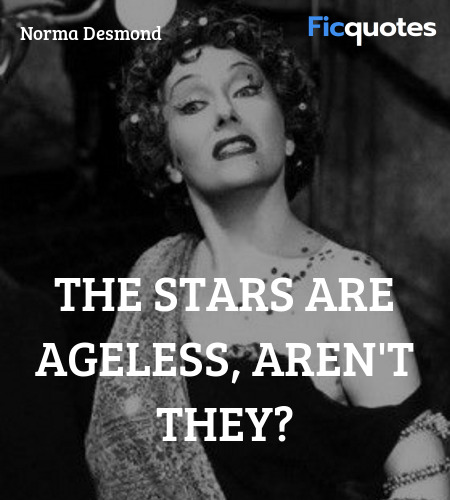 The stars are ageless, aren't they? 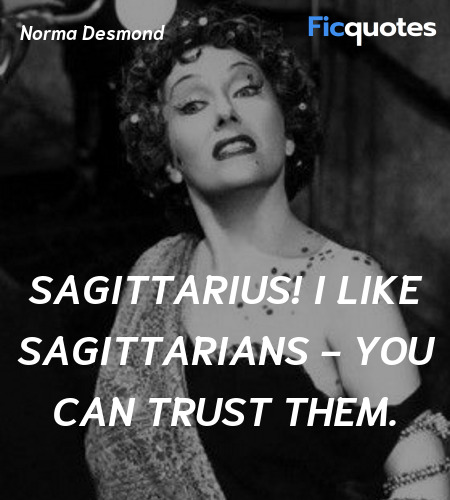 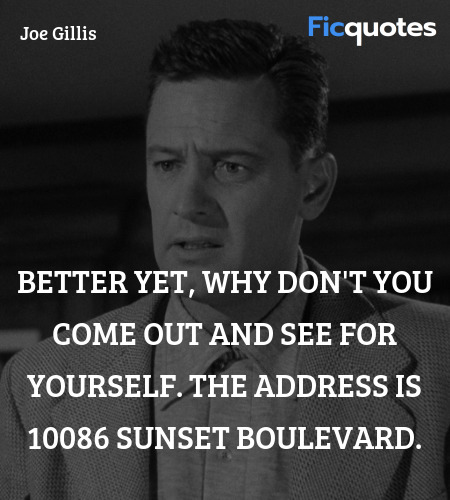 Better yet, why don't you come out and see for yourself. The address is 10086 Sunset Boulevard. 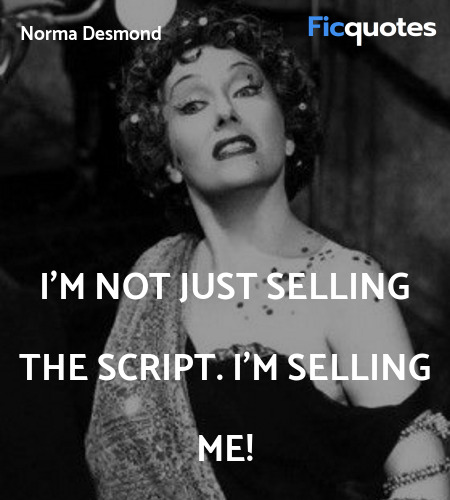 I'm not just selling the script. I'm selling me!

Madame has moments of melancholy.

If you need any help with the coffin, call me.

Finally, I located that agent of mine - the big faker. Was he out digging up a job for poor Joe Gillis? Huh. He was hard at work at Bell-Air making with the golf sticks.

I felt kind of pleased with the way I'd handled the situation. I dropped the hook and she snapped at it.

The others around the table would be actor friends. Dim figures you may still remember from the silent days. I used to think of them as your wax works.

No one ever leaves a star. That's what makes one a star.

I can't go on with the scene. I'm too happy. Mr. DeMille, do you mind if I say a few words? Thank you. I just want to tell you all how happy I am to be back in the studio, making a picture again! You don't know how much I've missed all of you.

There just aren't any faces like that any more. Maybe one - Garbo.

You there! Why are you so late? Why have you kept me waiting so long?

Those idiot producers. Those imbeciles. Haven't they got any eyes? Have they forgotten what a star looks like? I'll show them! I'll be up there again, so help me!

You know, this floor used to be wood. But, I had it changed. Valentino said there's nothing like tile for a tango.

No one ever leaves a star...

This way. In here. I put him on my massage table, in front of the fire. He always liked fires and poking at them with a stick. I've made up my mind, we'll bury him in the garden.

I'd like the coffin to be white, and I want it specially lined with satin. White... or pink. Maybe red! Bright flaming red! Let's make it gay!

How much will it be? I warn you, don't give me a fancy price just because I'm rich!

Betty Schaefer: Where have you been keeping yourself? I've got the most wonderful news for you.
Joe Gillis: I haven't been keeping myself at all, lately.

Betty Schaefer: I think you should throw out all that psychological mess - exploring the killer's sick mind.
Joe Gillis: Psychopaths sell like hotcakes!

Betty Schaefer: So, you take plot 27A, make is glossy, make it slick?
Sheldrake: Eh-eh-eh-eh. Those are dirty words. You sound like a bunch of New York critics.

Betty Schaefer: Are you hungry?
Joe Gillis: Hungry? After 12 years in a Burmese jungle, I'm starving, Lady Agatha, starving for a white shoulder.
Betty Schaefer: Philip you're mad.
Joe Gillis: Thirsting for the coolness of your lips.

I had ten years of dramatic lessons, diction, dancing. Then, the studio made a test. Well, they didn't like my nose - slanted, this way a little. So, I went to a doctor and had it fixed. They made more tests and they were crazy about my nose. Only, they didn't like my acting.

There are no other guests. We don't want to share this night with other people. This is for you and me.

Betty Schaefer: Perhaps the reason I hated "Bases Loaded" is that I knew your name. I'd always heard you had some talent.
Joe Gillis: That was last year. This year I'm trying to earn a living.

Betty Schaefer: I've been hoping to run into you.
Joe Gillis: What for? To recover that knife you stuck in my back?

Betty Schaefer: Oh, the old familiar story. You help a timid little soul cross a crowded street, she turns out to be a multimillionaire and leaves you all her money.
Joe Gillis: That's the trouble with you readers, you know all the plots

Betty Schaefer: Oh, I'm sorry, Mr. Gillis, but I just didn't think it was any good. I found it flat and trite.
Joe Gillis: Exactly what kind of material do you recommend? James Joyce? Dostoyevsky?
Betty Schaefer: I just think that pictures should say a little something.
Joe Gillis: Oh, one of the message kids. Just a story won't do. You'd have turned down Gone With the Wind.
Sheldrake: No, that was me. I said, "Who wants to see a Civil War picture?"

I can still see myself in the line. Marie Prevost. Mabel Normand. Mabel was always stepping on my feet.

Without me, there wouldn't be any Paramount studio.

Come think of it, the whole place seemed to have been stricken with the kind of creeping paralysis... out of beat with the rest of the world... crumbling apart in slow motion. There was a tennis court... or rather the ghost of a tennis court... with faded markings and a sagging net... And of course she had a pool. Who didn't then? Mabel Norman and John Gilbert must have swum in it ten thousand midnights ago... It was empty now. Or was it?

I felt caught like the cigarette in that contraption on her finger.

It was a great big white elephant of a place. The kind crazy movie people built in the crazy 20s. A neglected house gets an unhappy look. This one had it in spades. It was like that old woman in "Great Expectations". That Miss Havisham in her rotting wedding dress and her torn veil, taking it out on the world, because she'd been given the go-by.

I was way ahead of the finance company. I knew they'd be becoming around and I wasn't taking any chances. So I kept it across the street in a parking lot behind Rudy's shoeshine parlour. Rudy never asked any questions about your finances... he'd just look at your heels and know the score.

The plain fact was she was afraid of that world outside. Afraid it would remind her that time had passed.

Now back to the typewritters by way of Washington Square

Yes, this is Sunset Blvd., Los Angeles, California. It's about 5 o'clock in the morning. That's the homicide squad, complete with detectives and newspaper men.

You don't yell at a sleepwalker. He may fall and break his neck.

I had landed myself in the driveway of some big mansion that looked run down and deserted.

Then I talked to a couple of Yes men at Metro. To me, they said No.

The whole place seemed to have been stricken with a kind of creeping paralysis - out of beat with the rest of the world, crumbling apart in slow motion.

Sometimes it's interesting to see just how bad - bad writing can be. This promised to go the limit.

You don't yell at a sleepwalker - he may fall and break his neck. That's it: she was still sleepwalking along the giddy heights of a lost career.

So they were turning after all, those cameras. Life, which can be strangely merciful, had taken pity on Norma Desmond. The dream she had clung to so desperately had enfolded her.

The poor dope - he always wanted a pool. Well, in the end, he got himself a pool.

Audiences don't know somebody sits down and writes a picture; they think the actors make it up as they go along.

They took the idols and smashed them, the Fairbankses, the Gilberts, the Valentinos! And who've we got now? Some nobodies!

Next time I'll bring my autograph album along. Or, maybe a hunk of cement and ask for your footprint.

I pegged him as slightly cuckoo, too. A stroke maybe.

She'd take me for rides in the hills above Sunset. The whole thing was upholstered in leopard skin and had one of those car phones - all gold plated.

The last week in December, the rains came. A great big package of rain. Oversized. Like everything else in California.

I just had to get out of there. I had to be with people my own age. I had to hear somebody laugh again. I thought of Artie Green. There was bound to be a New Year's shindig going on in his apartment down in Los Palmas. Writers without a job. Composers without a publisher. Actresses so young they still believe the guys in the casting office. A bunch of kids who didn't give a hoot.

After that, I drove down to headquarters. That's the way a lot of us think about Schwab's Drug Store. KInd of a combination office, coffee clutch, and waiting room. Waiting. Waiting for the gravy train.

As I drove back towards town, I took inventory of my prospects. They now added up to exactly zero. Apparently, I just didn't have what it takes. And the time had come to wrap up the whole Hollywood deal and go home.

She'd sit very close to me and she'd smell of tuberoses - which is not my favorite perfume. Not by a long shot. Sometimes as we'd watch, she'd clutch my arm or my hand, forgetting she was my employer. Just becoming a fan. Excited about that actress up there on the screen. I guess I don't have to tell you who the star was. They were always her pictures. That's all she wanted to see.

And there's a great little part for Bill Demarest. One of the trainers. Old time player who got beaned. Goes out of his head sometimes.

Incredible as it may seem, there'd been some more of those urgent calls from Paramount. So, she put on about a half a pound of makeup, fixed it up with a veil, and set forth to DeMille in person.

A very simple setup. An older woman who's well-to-do. A younger man who's not doing too well.

We didn't need dialogue. We had faces!

There once was a time in this business when I had the eyes of the whole world! But that wasn't good enough for them, oh no! They had to have the ears of the whole world too. So they opened their big mouths and out came talk. Talk! TALK!

Well, this is where you came in, back at that pool again, the one I always wanted. It's dawn now and they must have photographed me a thousand times. Then they got a couple of pruning hooks from the garden and fished me out... ever so gently. Funny, how gentle people get with you once you're dead.

We don't need two cars, we have a car. Not one of those cheap new things made of chromium and spit, an Isotta-Fraschini. Have you ever heard of Isotta-Fraschini? All handmade. Cost me $28,000.