Witness for the Prosecution Quotes

Witness for the Prosecution

Witness for the Prosecution Quotes 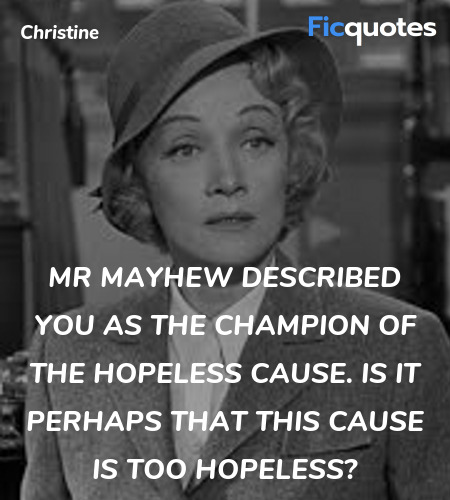 Mr Mayhew described you as the champion of the hopeless cause. Is it perhaps that this cause is too hopeless? 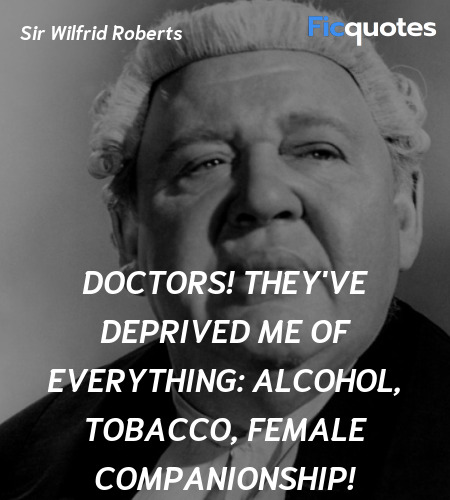 Doctors! They've deprived me of everything: alcohol, tobacco, female companionship! 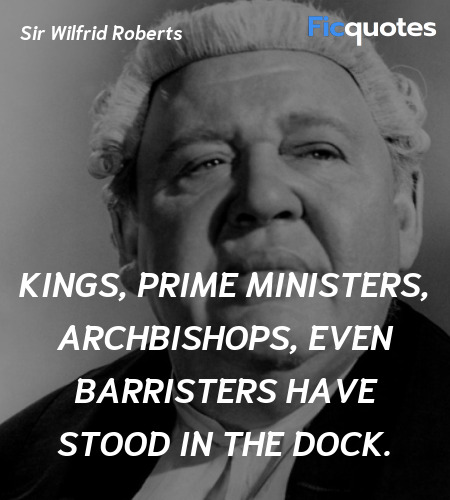 Kings, prime ministers, archbishops, even barristers have stood in the dock. 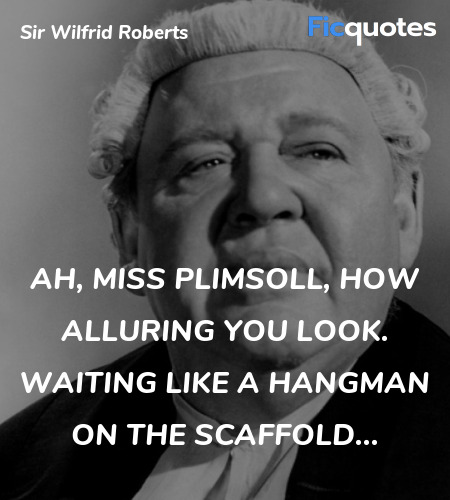 Ah, Miss Plimsoll, how alluring you look. Waiting like a hangman on the scaffold...

Mayhew: She and her husband had lived abroad for many years in British Nigeria. He was in the colonial service. He died in '45 of a heart attack.
Sir Wilfrid: Oh, please, Mayhew, not while I'm smoking.

The question is, Frau Helm, were you lying then, are you lying now, or are you not in fact a chronic and habitual LIAR!

You are burning my nose.

Wilfrid the Fox! That's what they call him, and that's what he is!

Might as well get a bigger box of more mothballs and put me away to.

You know, I feel sorry for that nice Mr. Vole. And not just because he was arrested, but that wife of his, she must be German. I suppose that's what happens when we let our boys cross the Channel. They go crazy! Personally, I think the government should do something about those foreign wives. Like an embargo. How else can we take care of our own surplus. Don't you agree Sir Wilfrid?

I have done an unethical thing. I have taken your cigar and I am not taking your case.

I could probably think better if you gave me one of those cigars.

We've disposed of the gallows, but there's still that banana peel somewhere.

You could be jailed for that. You had no search warrant for my cane!

Mayhew: She and her husband had lived abroad for many years in British Nigeria. He was in the colonial service. He died in '45 of a heart attack.

I am constantly surprised that women's hats do not provoke more murders.

What a wicked woman I am, and how brilliantly you expose me!

Christine Vole: You think Mrs. French looked upon Leonard as a son? Or a nephew?
Brogan-Moore: I do. An entirely natural and understandable relationship.
Christine Vole: What hypocrites you are in this country.

Leonard Vole: How are you fixed for sugar?
Christine Vole: I could use some.

It's horrible! In a gemutlich sort of way.

Christine Vole: You better get out of here. You've been trouble enough.
Leonard Vole: Actually, it's your own fault. That costume in the picture outside gave the boys ideas, and then those trousers of yours let them down hard.