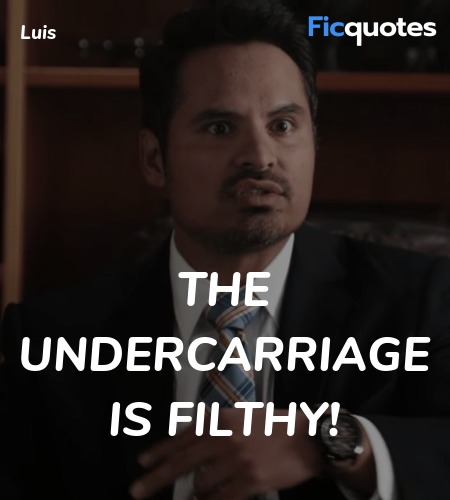 The undercarriage is filthy!

Sonny Burch : Where... is Scott Lang?
Luis : Well, see, that's complicated. 'Cause when I first met Scotty, he was in a bad place. And I'm not talking about cell block D. His wife had just filed for divorce. And I was like, "Damn, homie, she dumped you while you were in lock-up?" And he's like, "Yeah, I know. I thought I was gonna be with her forever, but now, I'm all alone!" And I was like, "Damn, homie, you gotta chin up. 'Cause you'll find a new partner. But you know what? I'm Luis." And he says, "You know what? I'm Scotty. And we're gonna be best friends."

Dr. Hank Pym : Hiya, champ, how was school today?
Scott Lang : Aw, ha ha ha! Alright, get your jokes out now, can you fix the suit?
Hope van Dyne : So cranky.
Dr. Hank Pym : You want a juice box and some string cheese?
Scott Lang : Do you really have that?

You know what? You're right. This isn't truth serum. 'Cause I don't feel anything. That was a lie. I did feel something. This is truth serum! 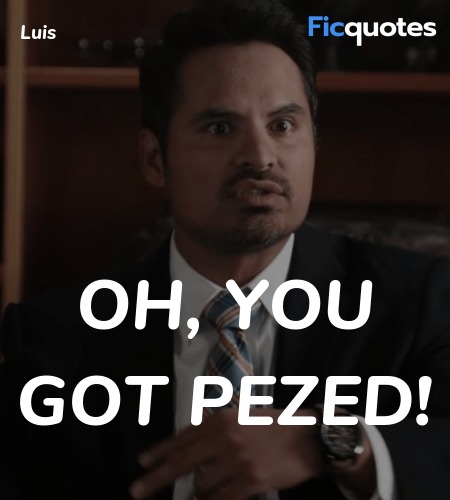 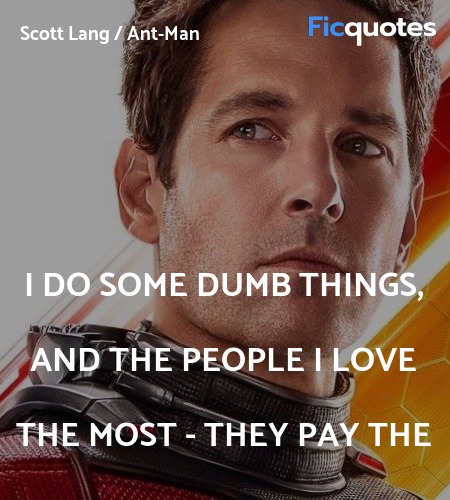 I do some dumb things, and the people I love the most - they pay the 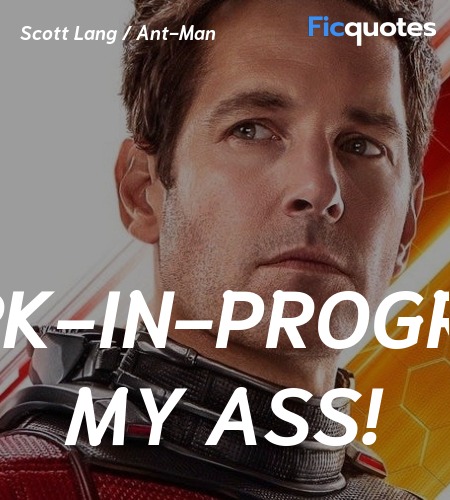 Anyone seen a Southern gentleman carrying a building

Cassie : Why can't you just leave my daddy alone?
Jimmy Woo : Oh, Cassie. This must all seem like a bunch of confusing grown-up stuff to you, huh? Well, think of it this way. Your school has rules, right? Like, you can't draw on the walls. Well your daddy went to Germany and drew on the walls with Captain America. And that was a violation of Article 16, Paragraph Three of the Sokovia Accords. Now, as a part of his joint plea deal with Homeland Security and the German government... he was allowed to return to the U.S. provided he serve two years under house arrest followed by three years of probation. And avoid any unauthorized activities, technology or contact with any former associates who were or currently are in violation of said Accords. Or any related statutes. Ok, sweetie?
Scott Lang : Wow, you're really great with kids.
Jimmy Woo : Thanks, I'm also a youth pastor.

Thanks to you, we had to run. We're still running.

Cassie : There! It's the microtreasure!
Scott Lang : My trophy?
Cassie : It looks like treasure.
Scott Lang : Oh, it is to me.
Cassie : I wanna take it to show and tell.
Scott Lang : Oh, you can't do that. Can't. It never leaves the house. It's too important. This is the best birthday present you ever got me. I'm so touched you think I'm the 'World's Greatest Grandma.'"
Cassie : It was the only one they had.
Scott Lang : Makes me wanna knit you a sweater.

So anyway, this guy gets out of jail and starts working for Hank. And that's when he met Hope. And Hope's all like, "I want nothing to do with you. Look at my hairdo. I'm all business." And then Scotty's like, "You know what, girl? My heart's all broken, and I'll probably never find love again. But damn, if I want to kiss you!" But then you fast-forward and they're all like into each other, right? And then Scotty's like, "You know what, I can't tell you this, but I'm gonna go trashing the airport with Captain America!" Then she said, "I can't believe you split like that! Smell you later, dummy!" So Scotty goes on house arrest, and he won't admit it, but his heart's all like, "Damn! I thought Hope could've been my new true partner. But I blew it!" But fate brought them back together, and then Hope's heart is all, "I'm worried that I can't trust him. And he's gonna screw up again and ruin everything." And in my heart, it's all like, "That fancy raspberry filling represents the company's rent. And we're days away from going out of business! Oooh!"

Luis : Wow, Dr. Pym. Like, who would've thought that, once again, in your hour of need, that you would turn to us? You know?
Dr. Hank Pym : Not me.

Luis : Tell me you got the van washed for tomorrow morning.
Dave : Down to the undercarriage, baby.
Luis : You sprung for the undercarriage wash?
Dave : Well, you said get the works.
Luis : That's a scam, Bro. We live in California, not Minnesota!
Sonny Burch : He's right. The undercarriage wash. That's for cleaning off road salt. Laid out in all those snow-laden sister states.
Luis : Who are you and why do you know so much about car wash protocol?

Sonny Burch : Okay, hold on, hold on. I like a good story as much as the next person, but what in the hell does this have to do with where Scott Lang is?
Luis : I'm getting there. I'm getting there.
Dave : You put a dime in him, and you gotta let the whole song play out.
Kurt : He like human jukebox.
Luis : Oh, my abuelita had a jukebox in the restaurant! Yeah, only played Morrissey. And if anybody ever complained, she'd be like "Oh, ¿no te gusta Moz". You know, Chicanos we call him "Moz". "Then, ¡adiós!". What can I say? You know, we relate to this melancholy ballads. You know?

You know, my Pap-pap always said if you wanna do something right, you make a list. So, we should do that. One, we have to break into that lab. Two, we have to kick out Foster and Ghost. Three, we have to fight Ghost. That seems like it should be part of 2. 2-A. Right? Let's call it 2-A. Fight Ghost, 2-A. Oh! Also, we have to make sure that the lab is fully grown for you to come back. Otherwise we're screwed...

Dr. Bill Foster : It's incredible. Your link to Janet. It's Quantum entanglement, between the quantum states composed of her molecules and your brains.
Scott Lang : Yeah. That's what I was thinking. Do you guys just put the word 'quantum' in front of everything?

Now, we're sure this is our shrunken building and not someone else's, right?

Now, if you just excuse me, I'm in the middle of trying to steal something with my daughter.

Cassie : Don't just stand there! Let's bounce before the po-po come back!
Scott Lang : Po-po? How do you even know that?

Dr. Hank Pym : Relax. No one's gonna recognize us.
Scott Lang : What, because of hats and sunglasses? It's not a disguise, Hank. We look like ourselves at a baseball game.

Dr. Hank Pym : Last night we powered up the tunnel for the first time. It overloaded, and it shut down. But for a split second, the doorway to the Quantum Realm was opened.
Scott Lang : And?
Hope van Dyne : And five minutes later, you called. Talking about Mom.
Dr. Hank Pym : We think when you went down there, you may have entangled with her.
Scott Lang : Hank, I would never do that. I respect you too much.
Dr. Hank Pym : Quantum entanglement, Scott.